Alchemical philosophers summed up their work in a simple phrase, Solve et coagula (dissolve and coagulate) — the continual cycling between fixed and volatile forms of matter. In the Scroll, the process of coagulation is represented by the human-headed Bird of Hermes, devouring the wings that once gave it flight. Below, the Serpent of Arabia sinks its teeth into a stylized sun and moon, signifying the dissolution of gold and silver in the philosophical mercury. A new substance is born: the elixir, shown here as the dragon’s own life-giving blood.

Alchemical texts and images are often packed with symbolic beasts, although their meaning changed over time. Often they stand in for chemical substances. Here, they supply the key to understanding the ingredients and techniques favored by the Scroll’s designer. 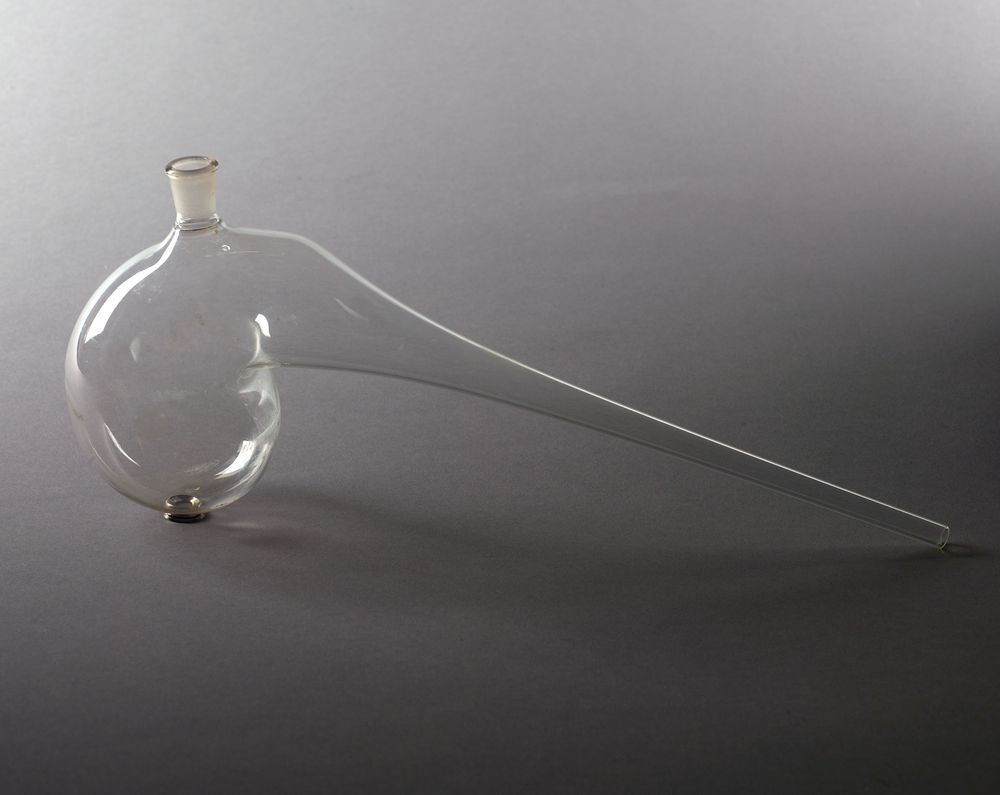 The retort is one of the earliest pieces of chemical apparatus, used for distillation. The substance to be distilled is placed inside the rounded body of the vessel and heated until it boils. As the resulting vapors cool, they flow down the long, downward-pointing neck to be collected in another flask. A similar retort was used to make the “green lion” displayed below. 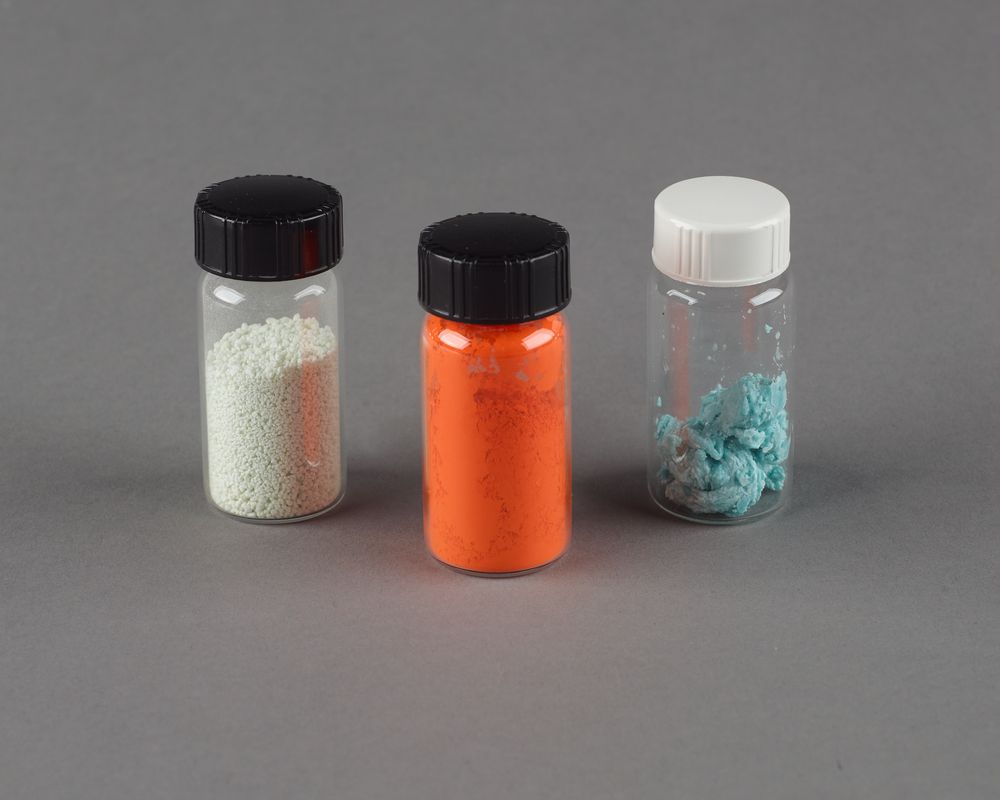 Ripley’s authentic writings describe two stones: a transmuting “mineral stone '' made by subliming mercury and green vitriol (modern iron sulfate), and a medicinal “vegetable stone” made from red lead (modern lead tetraoxide). Vitriol was an ingredient in the manufacture of mineral acids, used in goldsmithing and metallurgy. Red lead, or minium, was widely used as a pigment. In the Scroll, the two stones are represented by red and green lions, guarding the furnace mouth.

English alchemists also interpreted the “green lion” as a gum made by dissolving lead and copper compounds in distilled vinegar—here recreated in a modern reconstruction. 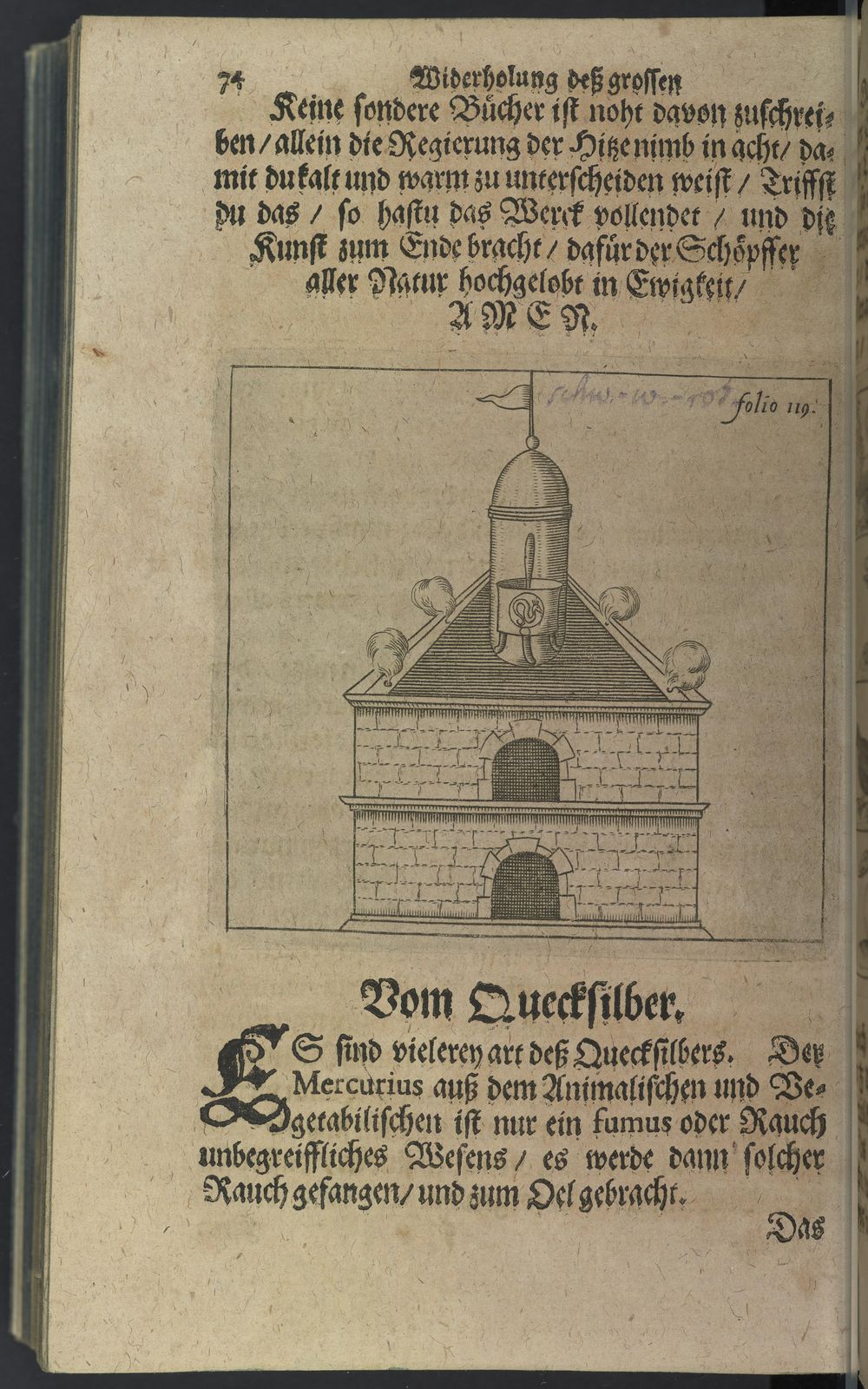 “Mercury” has many meanings in alchemy, describing not just metallic quicksilver, but a variety of alchemical products. Here, this diversity is illustrated in “Of the Great Stone of the Ancients,” a treatise attributed to a fictive adept, “Basil Valentine.” In Valentine’s alchemy, the serpent and eagle stand in for two salts: sal ammoniac and saltpeter. The raven, peacock, and swan allude to color changes in the work: black, multicolored, and white. Below, the selfless pelican nourishes its young. 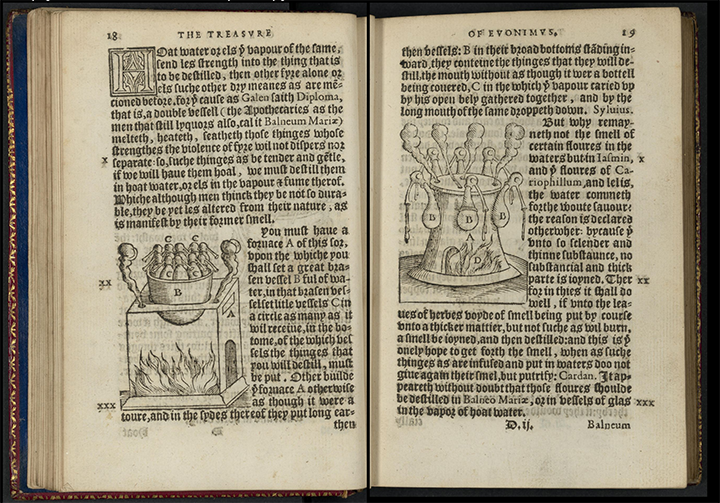 The Latin Treasure of Euonymus, compiled by the Swiss naturalist Conrad Gesner, was one of the earliest printed collections of chemical remedies, which helped to popularize their use in England. These remedies included the “quintessence,” made by repeatedly distilling wine. Outside alchemy, distillation apparatus was widely used to make medicinal oils and waters. Here, the text instructs on the type of furnace required for these delicate operations.