Diagrams were central to the logical system devised by the Majorcan philosopher Ramon Llull (ca. 1232-ca. 1315), which incorporated philosophical terms into wheels, ladders, trees, and tables. During the 14th century, alchemists adapted Lullian diagrams to express relationships between chemical materials and processes. Some deliberately wrote under Llull’s names, resulting in a large corpus of “pseudo-Lullian” texts. Although the historical Llull had rejected the possibility of metallic transmutation, his name nonetheless conferred authority on one of the most influential strands in European alchemy.

Although the Ripley Scroll does not use diagrams, its imagery does reflect pseudo-Lullian doctrines. In the garden, Adam and Eve eat grapes rather than the traditional apple: an allusion to the use of distilled wine, vinegar, and tartar in pseudo-Lullian alchemy. 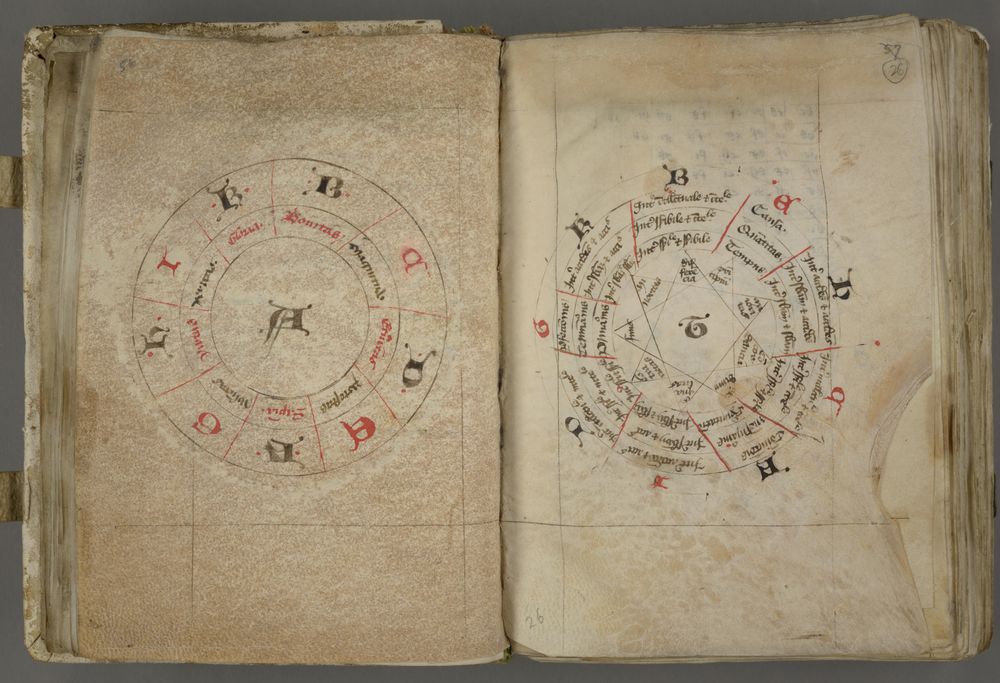 Authentic works of Ramon Lull circulated widely in medieval Europe, including in England. This 15th-century miscellany of quadrivium texts, either from Oxford or Cambridge, includes an extract from Llull’s Ars brevis. In this simplified version of Llull’s complex logical art, principles are represented by letters of the alphabet and plotted onto wheel diagrams. The manuscript was later owned by Sir Henry Percy (1564-1632), Ninth Earl of Northumberland, patron of the mathematician and alchemist Thomas Harriot. 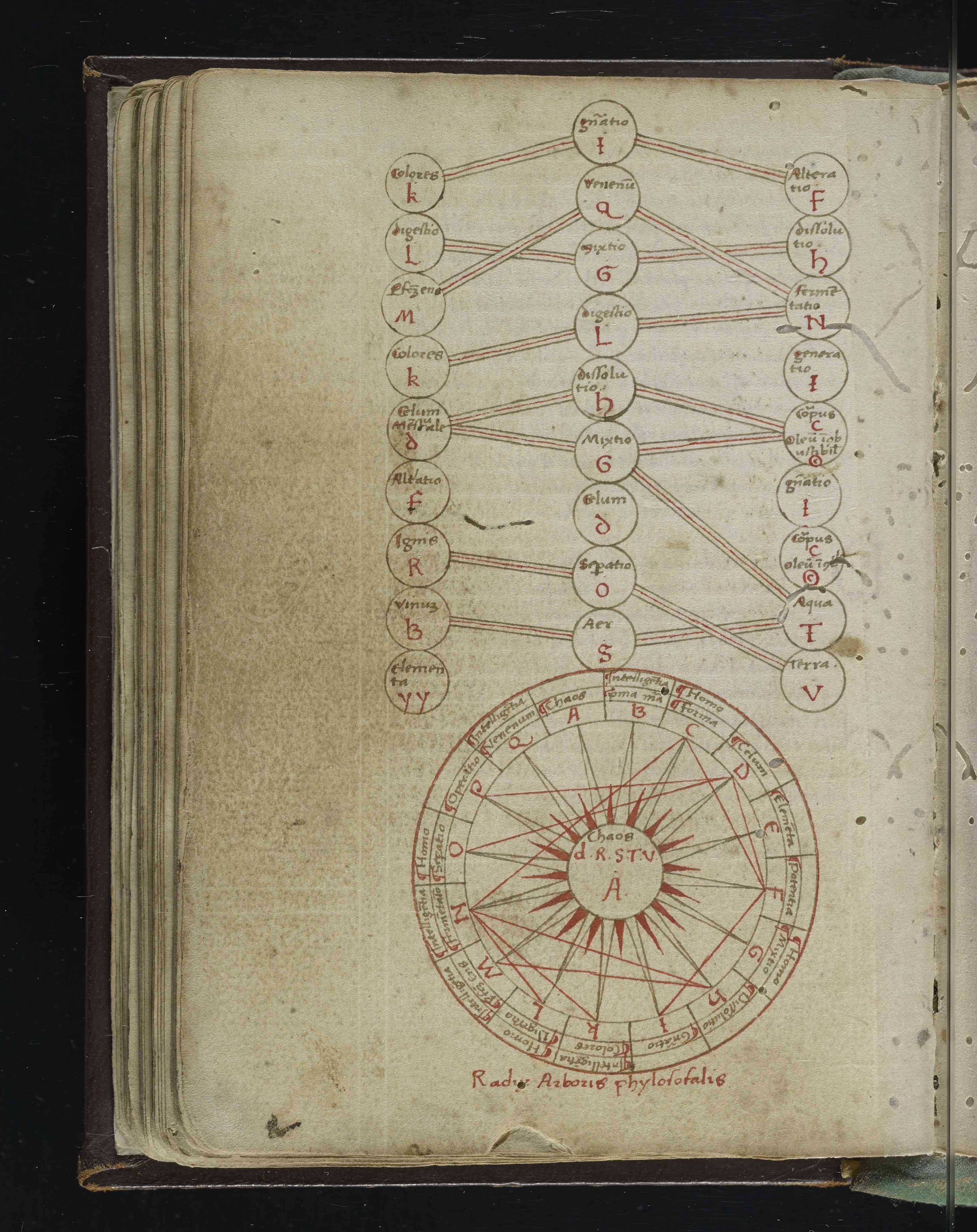 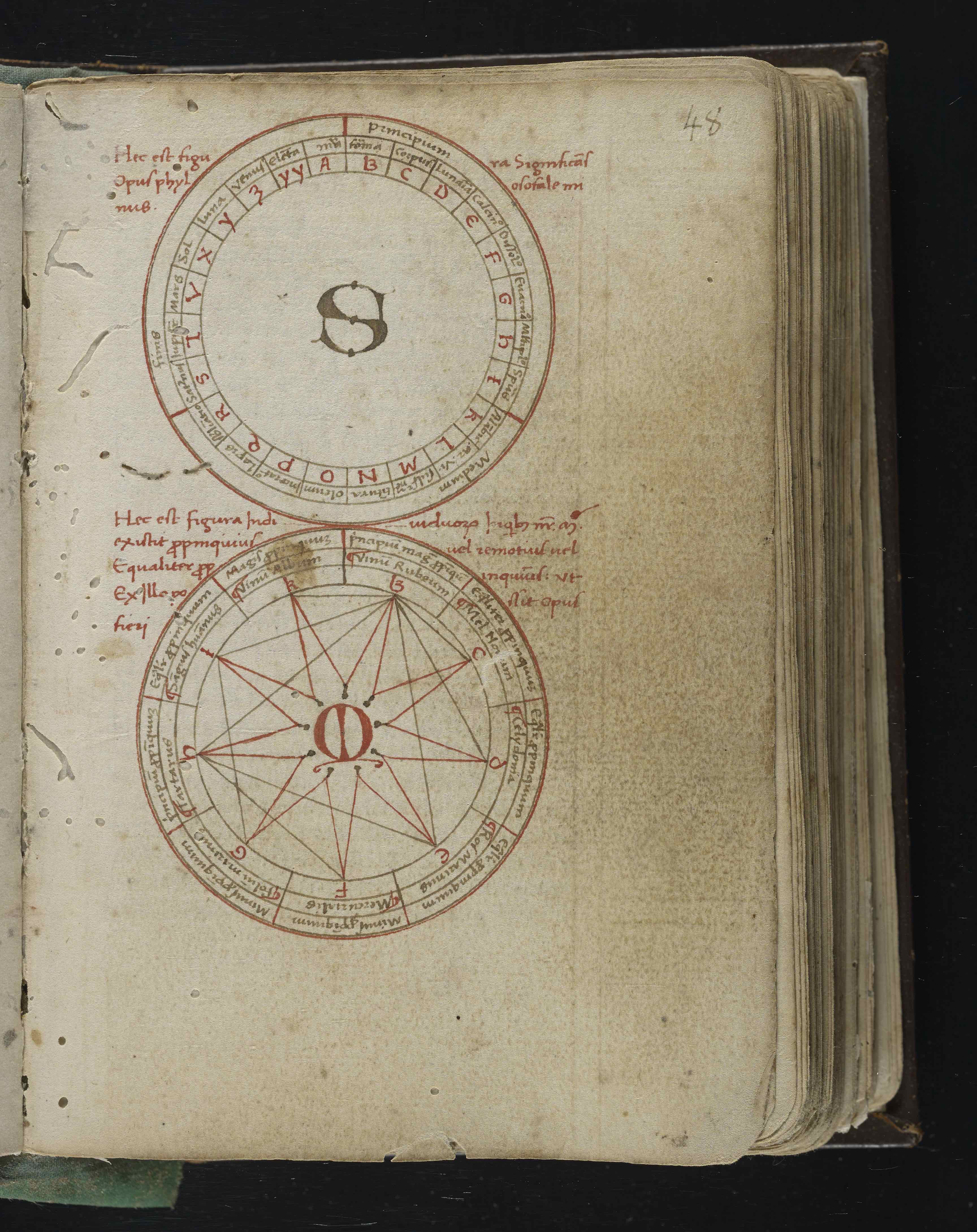 This 15th-century manuscript preserves a complex system of Lullian-style wheels and trees, that show how mineral and organic ingredients can be alchemically combined.The Book of the Secrets of Nature, or Quintessence, written in the second half of the 14th century, was one of the most influential alchemical treatises in early modern Europe, and an important source for the Ripley Scroll. Its core ingredient is the “quintessence”, a solvent distilled from wine, which Pseudo-Lull adapts for both transmutational and medicinal ends. 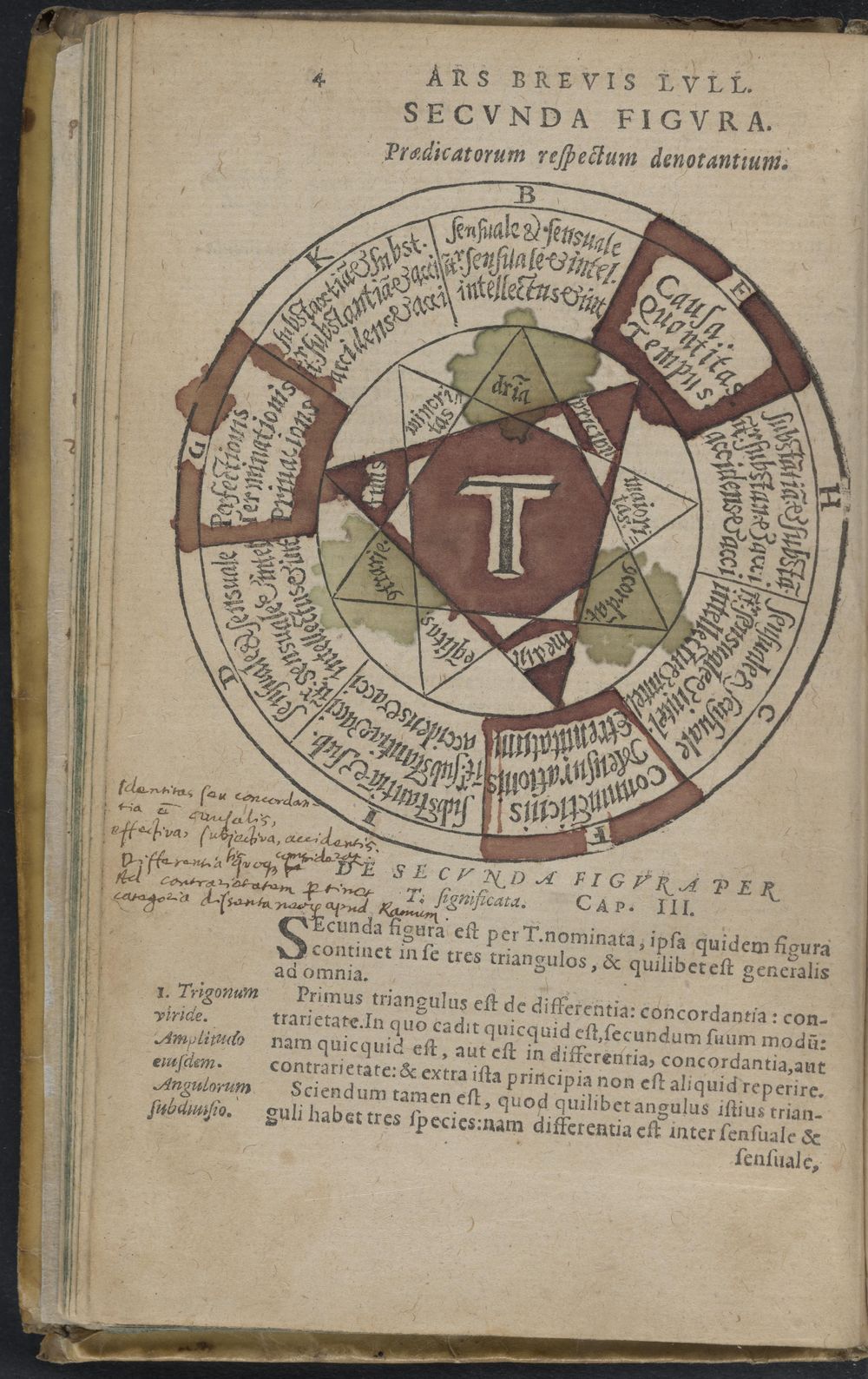 The intricate diagrams found in Lullian manuscripts were often translated into print in a simplified form. An owner of this printed edition of the Ars brevis has annotated the text and used color coding to clarify parts of the diagram. Although this book is not alchemical, its printer, Lazarus Zetzner (1551-1616), later became famous as a publisher of alchemical material. His multi-volume compendium, the Theatrum chemicum, exploited early modern interest in medieval alchemy. 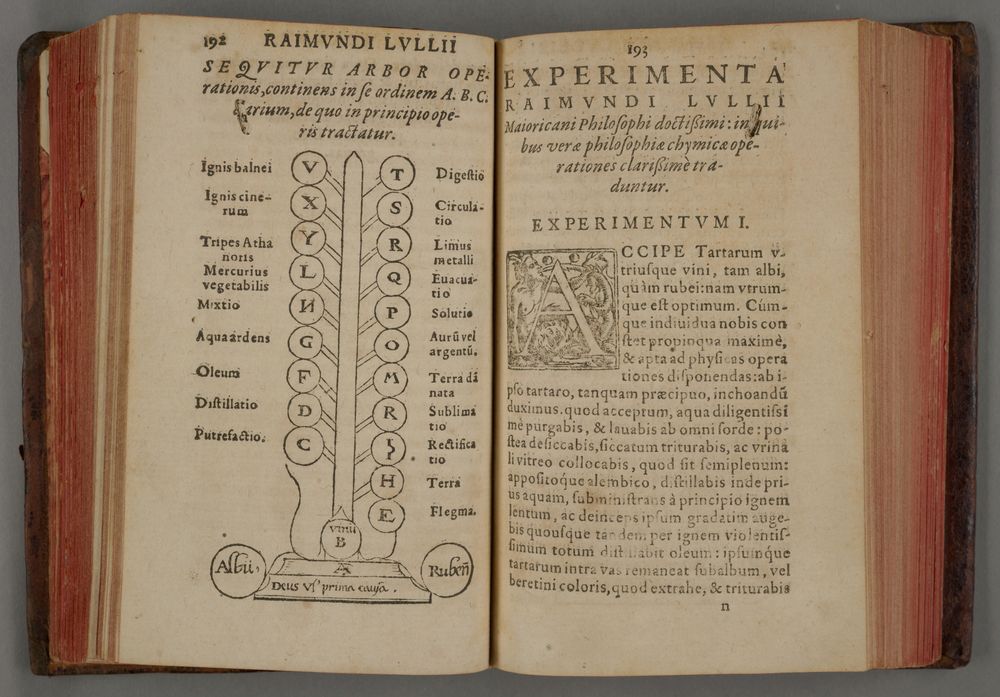 This pseudo-Lullian alchemical collection was edited by the Strasbourg physician Michael Toxites. Here, the “Tree of the Working” sets out the main operations and ingredients used to prepare alchemical medicines from red and white wine. As in authentic Lullian writings, the first cause is God (Deus, represented by the letter A), followed by wine (vinum, B). By presenting Llull’s medicinal alchemy as a natural precursor to Paracelsian chemical medicine, Toxites also bolstered the authority of the Swiss medical reformer Paracelsus. 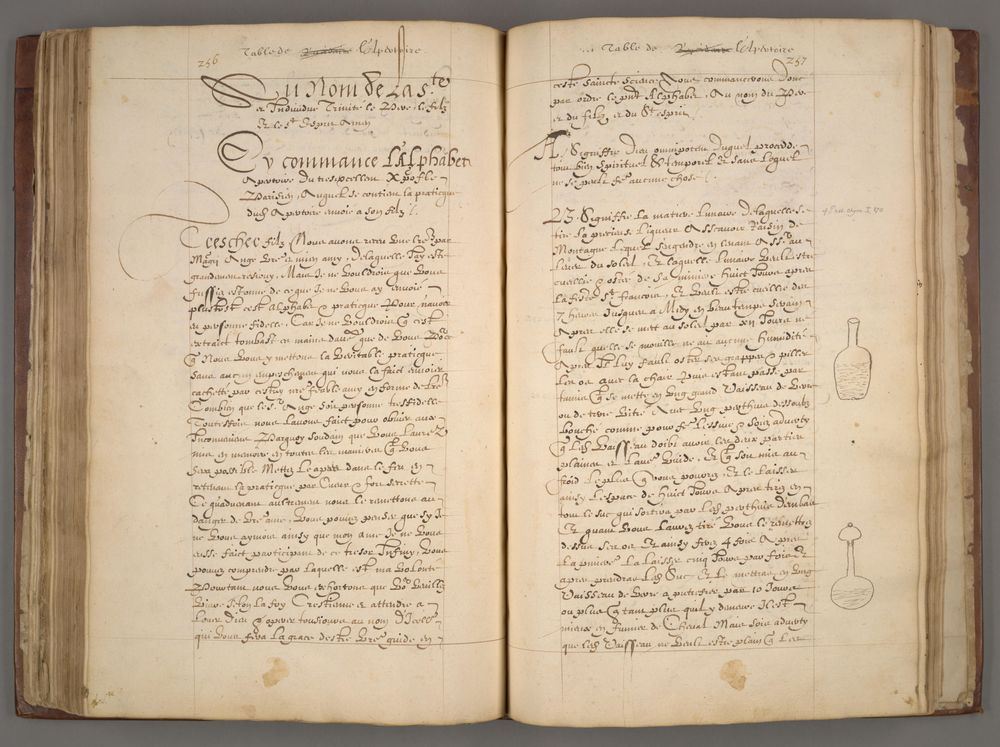 After George Ripley, the leading popularizer of pseudo-Lull was the late 15th-century Italian alchemist Cristoforo Parigino. Although written in Italian, his works were soon translated into Latin and French. The Alfabeto apertoriale, here in a French translation,is heavily influenced by the pseudo-Lullian Book of the Secrets of Nature. This copy begins on the right-hand page with A (God), followed by a detailed account of B (Lunaria), the wine-based solvent central to pseudo-Lullian alchemical medicine — here illustrated by marginal drawings of vessels.