Without the momentum created by the short-lived FEPC, the progress on anti-discrimination in the labor force achieved by the Civil Rights Act of 1964 and the Equal Employment Opportunity Commission (EEOC) may not have been possible. Both had a lasting impact on anti-discrimination in the labor force. This framework also provided labor organizations a firm foundation for their efforts to call out discrimination, to stamp out racism and intolerance, and to identify bigotry in hiring, pay, and promotion. 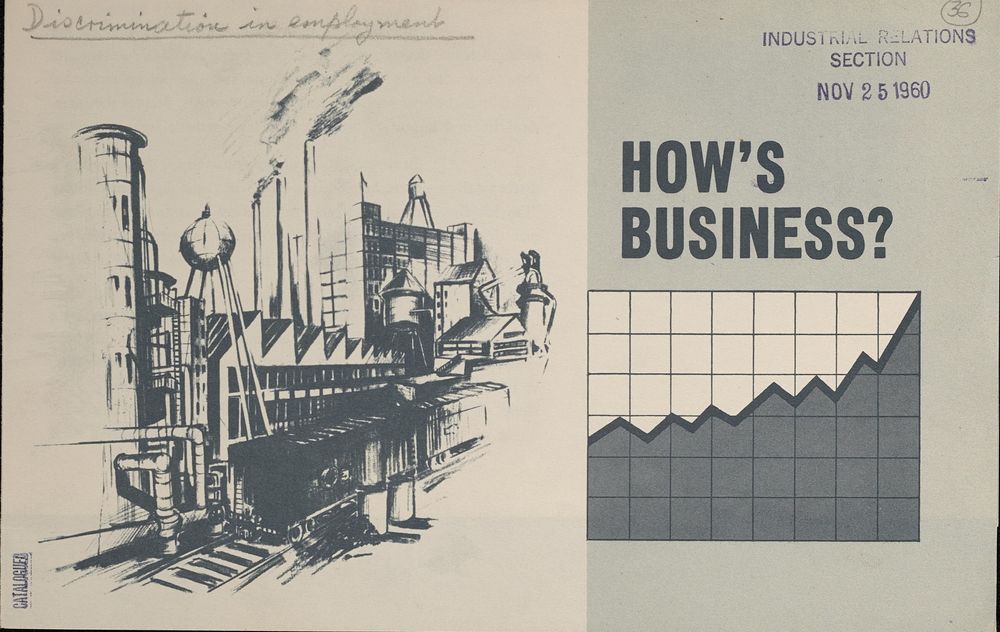 The conversation of equal job opportunity continued through the 1950s and 1960s during the Eisenhower administration. The President’s Committee of Government Contracts was formed in 1953 and chaired by Vice President Richard Nixon. This document discusses the legal and moral problems of discrimination, enlisting cooperation from federal employers. 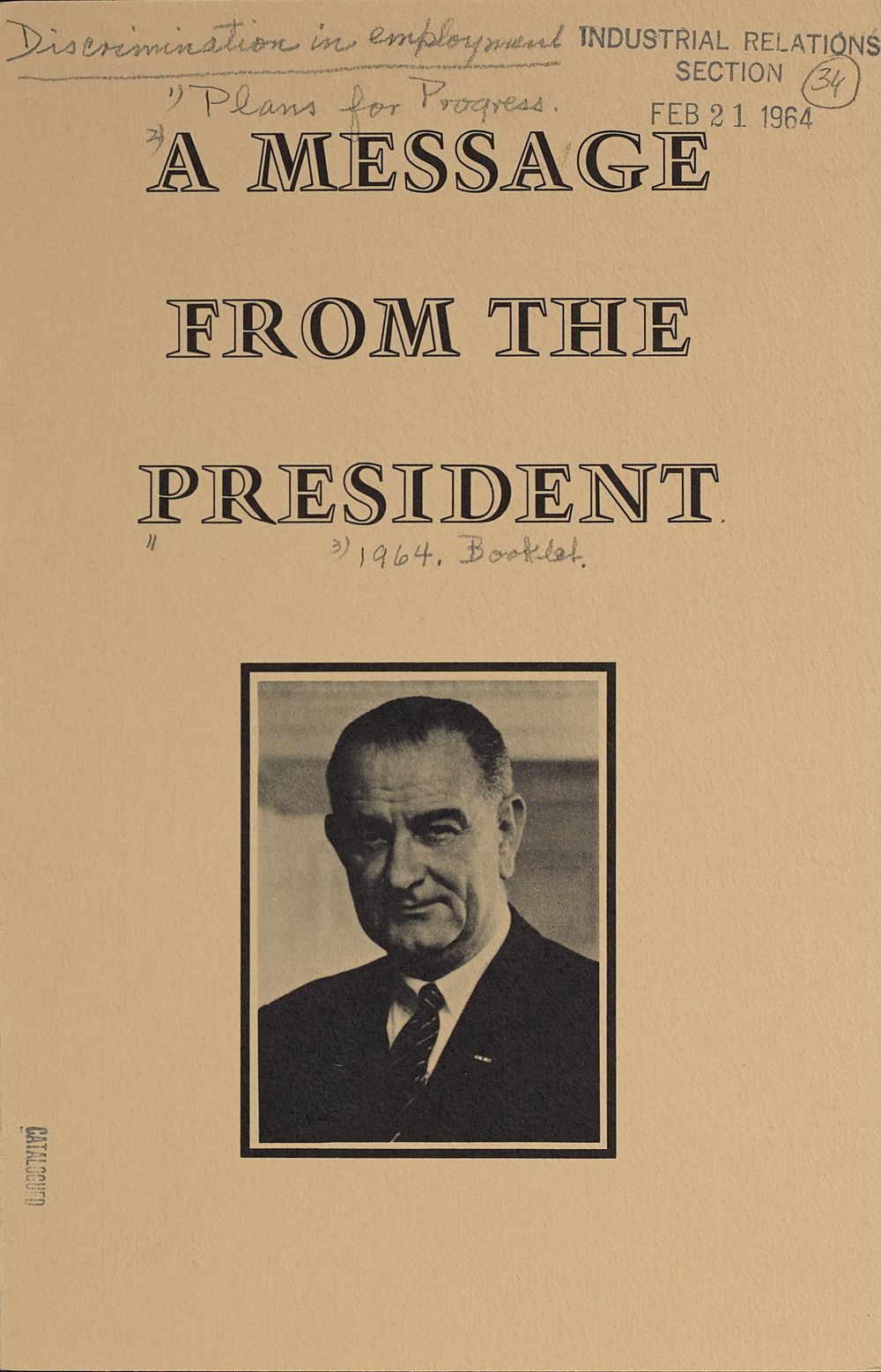 Message from the President, circa 1964

Through his work on the “Plans for Progress” program, President Lyndon B. Johnson contributed to anti-discrimination. The program included a pledge from 141 companies and more than 7 million employees to hire and promote without regard to “race, color, or creed.” This message from President Johnson tells readers about his own chief of staff, an African American woman, who cannot use the bathroom facilities in certain sections of Washington or may not be served a cup of coffee because of the color of her skin.

Employers: There is more manpower, circa 1951

Although using the masculine term “manpower,” this pamphlet–produced by the United States Department of Labor–is the only one in this collection that not only illustrates women in its pictures but also explicitly mentions women as a group. On an upcoming page, the vice president from Pillsbury Mills states, in essence, that we cannot realize our full economic potential until all men and women are permitted and encouraged to work at their full potential. 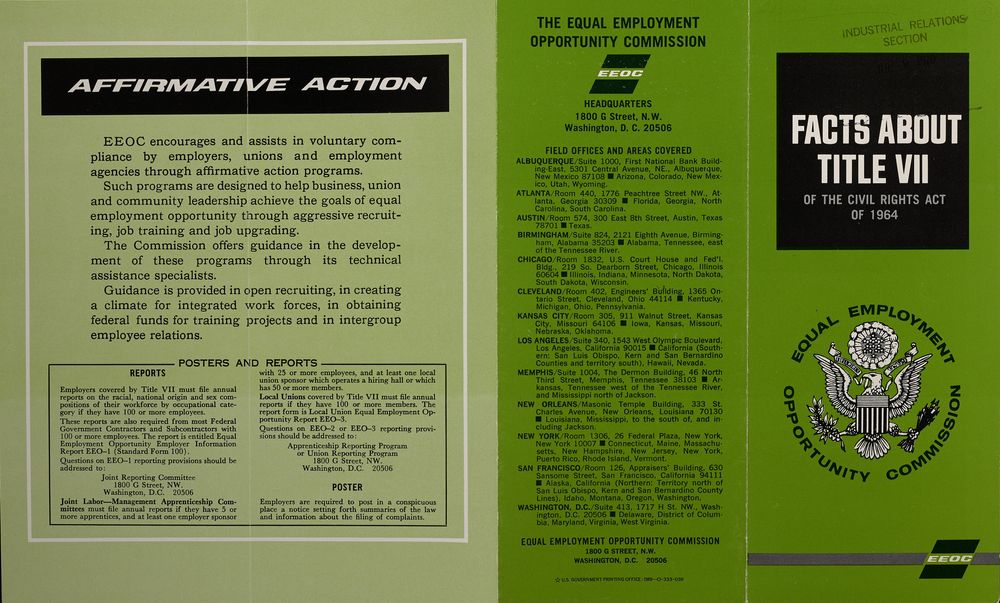 Affirmative Action was first used in the United States when President John F. Kennedy signed Executive Order 10925 in 1961, which subsequently established the Equal Employment Opportunity Commission (EEOC). Not until after the Civil Rights Act of 1964 was passed by Congress did the Commission officially become effective one year later in 1965. The EEOC assists in compliance of Affirmative Action by employers, unions, and employment agencies, and ensures that employers covered by Title VII report their workforce composition. 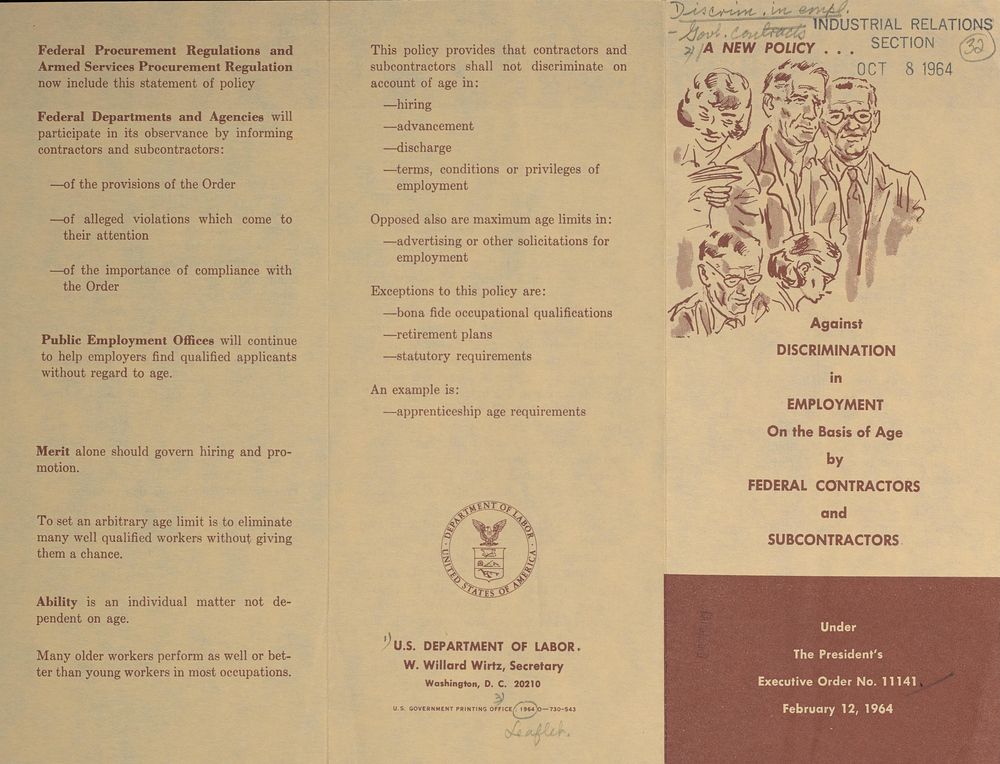 New policy against discrimination in employment on the basis of age by federal contractors and subcontractors, circa 1964