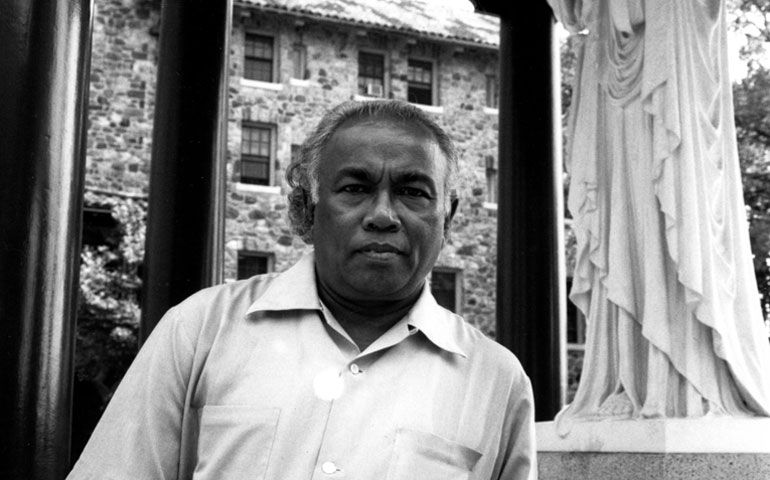 Fr. Tissa Balasuriya was a Catholic priest of the Missionary Oblates of Mary Immaculate (OMI). Often referred to as the rebel priest of the Sri Lankan Catholic church, he was involved in struggles for social justice and human rights of the urban poor. He was a liberation theologist, who was temporarily excommunicated under the papacy of John Paul II for challenging established views of the church on the Virgin Mary, the concept of Original Sin, the right of women to enter priesthood, and the role and value of other religions.

An agricultural economist in secular training from Oxford University, he initiated, supported, and wrote on widely ranging but co-related social movements and topics such as feminism, women’s rights, worker’s rights, urban poverty, Malaiyaha Thamils, ethnic conflict and reconciliation, global warming, environmental conservation etc. He consistently condemned capitalist systems of power, and repeatedly incorporated socialist ideology into his mediations on Christian theology and concerns on social justice. He often implicated the church, which he was a part of, in systems of exploitation and highlighted its role in colonization and colonial violence, religious persecution, and the formation of the global capitalist system.

In 1971, following the April Uprising, Balasuriya co-founded the Centre for Society and Religion with Bishop Leo Nanayakkara. The objective of the institute is to facilitate inter-cultural relations, inter-religious dialogue, and social activism. During the insurrections, anti-Tamil pogroms and the civil war, the centre served as a safe haven for the politically persecuted. The centre is also a publishing house for Balasuriya’s writings as well as the centre’s journals and magazines such as Quest, Logos, Vimukti Prakāśana and Sādhāraṇaya.

The more well-known among the many published books by Balasuriya include, Planetary Theology, Sri Lanka Economic Crisis, and Mary and Human Liberation. The latter came to the attention of Cardinal Joseph Ratzinger (later Pope Benedict XVI) for the manner in which it challenged established notions of Mary as a pale faced, voiceless, subservient virgin. The Congregation for the Doctrine of Faith found Balasuriya’s principal argument, that Mary was a “strong, mature, working class woman” who raised her son to be a revolutionary, to be heretical.