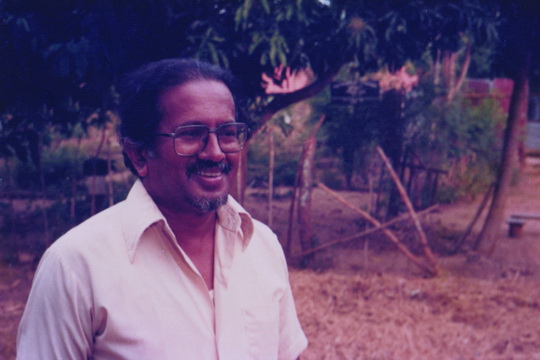 Fr Michael Rodrigo was a Catholic priest of the Missionary Oblates of Mary Immaculate (OMI). He is most well-known for his work and activism in Alukalavita Buttala with rural farmers and workers in the lower-Uva region. He was a renowned theologian with two doctorates in Comparative Religions and Buddhist Philosophy from the Gregorian University Rome and the Institut Catholique de Paris. He taught for many years at the National Seminary in Ampitiya Kandy, before he transferred to the seminary of Sevaka Sevana in Bandarawela. Sevaka Sevana was a new experimental seminary founded by Bishop Leo Nanayakkara, which broke away from the western colonial model of training priests, and facilitated the indigenization and conscientization of the Sri Lankan Catholic church. During this time, he was offered a Professorship at the Institut Catholique de Paris. However, he directed his knowledge and experience instead to establish Suba Seth Gedara in Alukalavita Buttala in 1980. The community centre which quickly expanded to an education centre and an organized collective of farmers was also titled ‘Centre for Buddhist-Christian Dialogue and Conscientization’.

Rodrigo rationalizes his move to the lower-Uva province as follows, “I came out to the village in July 1980, also as an act of reconciliation and recompense for the damage British Christians did to our peasantry in 1818”. In 1981, he was joined by Sister Milburga Fernando, a lecturer at Sevaka Sevana, and Sister Benedicta Fernandopulle, a qualified nurse in secular training. Together with the Buddhist priests and other community leaders, they transformed the centre into a clinic, a school, and small library to address the community’s health and education needs. Over the years, the centre also facilitated collaborations between the farming youth and university students to develop sustainable farming methods that enhanced the traditional chena and paddy cultivation methods familiar to the region for centuries.

However, the establishment of a multi-national cooperation named Booker-Tate Agriculture International, which began to cultivate sugar cane as a cash crop and established a sugar factory in Pelwatte, was to have a damning impact on the community efforts at Suba Seth Gedara. This community became increasingly concerned by the environmental impact caused by deforestation and the introduction of chemical fertilizers, and the economic impact on the traditional farming livelihoods of the region. This, compounded with the second JVP insurrection against the government, further alienated the rural youth from the economic centres of the country. Fr Rodrigo often clashed with the authorities on behalf of the youth in Buttala, who were prosecuted and persecuted by the state.

On November 10, 1987, Fr Michael Rodrigo was murdered by unidentified gunmen. According to one of his friends and colleagues, thirty years later, “the case has virtually been closed, though allegations persist that the killer or killers acted on orders from the highest levels of power…”.