A Man in Between: The Journals of Surveyor, Artist, and Indian Agent Thomas Adams

“Where we are camped, the water standing in pools is unpalatable, and the grass is scarce.”

This was the complaint of Thomas Adams, westering surveyor and U.S. Indian Agent, registered in his personal diary on the night of September 20, 1855. That grumble of a sentence, a mundane admission of totally predictable disappointment, was more or less identical to those lodged in dozens of other entries in Adams' journal during his travels out West. The going was tough out on the vast expanse of the Great Plains. Water and decent grass for the animals were precious and elusive. It would have been utterly routine for Adams and his compatriots to lie down in the dirt that night, hungry, thirsty, and cold. Starvation, exposure, exhaustion, and plain old violent death may visit tomorrow or the next day. It would not be out of the question either that on a long trek, across the endless flat expanse of Nebraska Territory circa 1855, one might die even sooner of boredom. 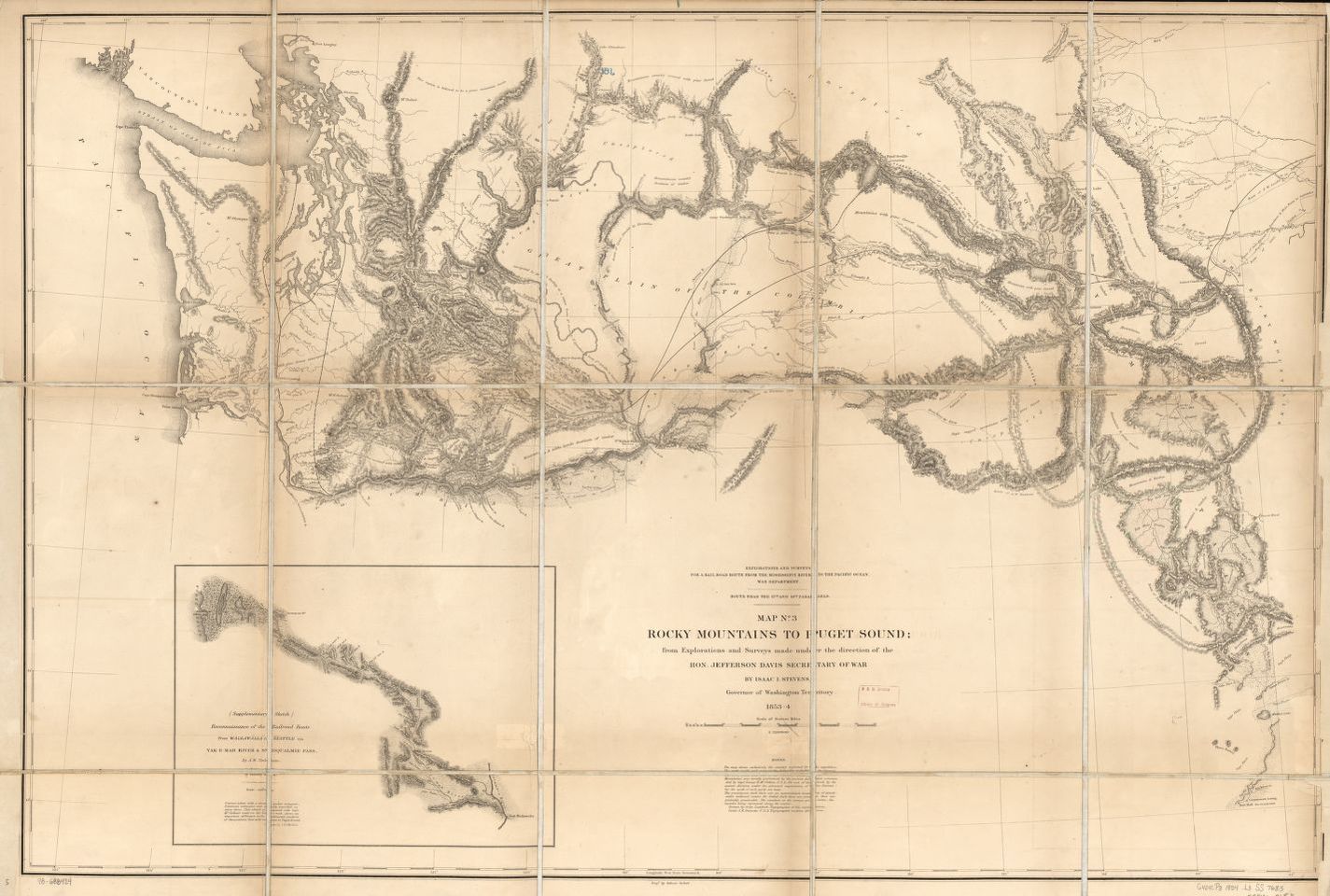 An 1859 survey map drawn from data gathered during Isaac Stevens and Thomas Adams' search for a railroad route from the Midwest to Puget Sound. Courtesy Library of Congress.

Adams spent most of his time out West in the 1850s surveying for the government-funded expeditions of Isaac Stevens, then-governor of Washington Territory. Stevens et. al’s mission was two-fold: first, to find a suitable route for horsemen and ox-cart from St. Paul, Minnesota to Puget Sound; and second, to find a route along the same path someday suitable for the cornerstone of American industrial conquest—the railroad. The legendary Northwest Passage connecting the Atlantic to the Pacific had been a fantasy; the transcontinental links would need to be forged in iron and laid thousands of miles through prairie, mountain, and swamp alike, and it would be no small undertaking. 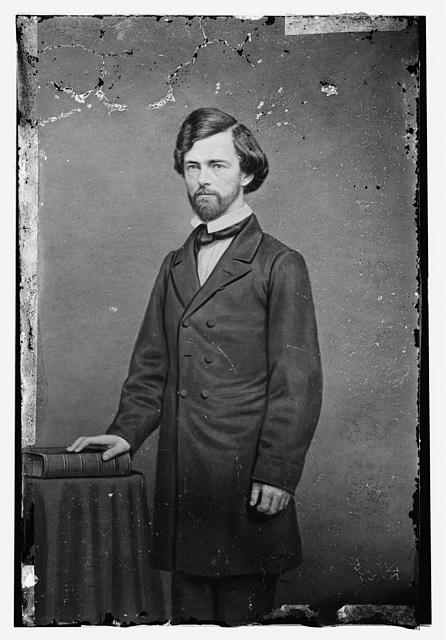 Isaac Stevens, first governor of Washington Territory (1853-57) and leader of Adams' survey team in 1853. Stevens notoriously imposed martial law on Washington Territory and brutally suppressed Native American tribes into signing coercive treaties. Adams wrote very little directly about Stevens in his journals, and they did not appear to have been close. Photographed by Matthew Brady, courtesy Library of Congress.

Adams did not write much about these momentous changes swirling around him across the continent. He mostly wrote about what was right in front of him: the shifting ecologies of the Plains, the Rockies, and the semi-tropical forests of the Pacific Northwest; the prospects and whereabouts of friends and colleagues stationed at remote forts across the region; and the habits, talents, and alien cultures of the many Native Americans he encountered along the way. He occasionally thought of the American homeland. On the night of January 1, 1854, Adams wrote: "As I sit by the fire writing this I think of my friends at home, how they are enjoying themselves, and wish them all a 'Happy New Year.'"

As I sit by the fire writing this I think of my friends at home, how they are enjoying themselves, and wish them all a 'Happy New Year.'

Adams wrote detailed entries in neat script, but he also had an artist’s eye, sketching in his downtime the profiles of Indian chieftains and scenes of ragged wagon trains, fort landscapes, and notable scenery. Some of these drawings are pencil sketches, seemingly traced out on the fly; others are marked by watercolor and pasted into the journal, a polished product reintroduced to the journal or, perhaps, the work of another left in the journal for reference.

Adams spent much of his time trading and negotiating as an Indian Agent with the Native tribes of what was then the Eastern District of Washington Territory, now comprising much of Montana. Adams worked primarily with the Flathead, Upper Pend d'Oreille, and Kootenay peoples. While each Indigenous nation had its own personalities and priorities, most were focused above all on blunting the aggressions of the Blackfoot Confederacy, traditional enemies who boasted expansive seasonal hunting grounds across the vast northern Great Plains. Adams found himself, like many Indian Agents, wedged between long-simmering conflicts he could barely begin to understand. The Flatheads in particular were far more invested in leveraging American manpower to protect themselves from Blackfoot incursions, rather than enter into extended discussions for permanent treaty terms.

Adams' work with the Flatheads suffered from the usual misunderstandings or mistranslations common between Anglo agents and Native players. But much of the time, Adams' frustrations boiled over because he rarely got straight answers from his boss, Isaac Stevens, if he even heard from Stevens at all. From 1853 to 1855, Adams routinely wrote Stevens letters complaining of basic communication breakdowns, writing that he was "truly anxious to obtain [further] instructions" and was "heartily sick of being so inactive." The Flatheads kept Adams fed and safe, but were wary about such lengthy stays and the prospect of sudden Blackfoot raids. He wrote in one entry in February, 1855, clearly jittery and bored from wiling away the days in camp, that "I never go a hundred yards from the house without a six shooter in my belt. In fact it is rather dangerous position here."

Adams' trips to Flathead and Kootenay country were, in a way, diplomatic preludes to official treaty negotiations, most of which were far more contentious than his own interactions. Governor Stevens became notorious for his imperious negotiating style, and the slew of treaties signed under his watch—ten were completed between 1854 and 1855—laid the groundwork, like most treaties with Native tribes, for gradual white settlement and forced assimilation tactics. This was one of the basic quandaries of the official relationship between the U.S. government and Native tribes—the former was, at this stage, a growing bureaucratic apparatus that struggled to keep up with the demands and rogue actions of its own settlers; most Indian groups, by contrast, regulated themselves more by consensus than coercion and were being asked (and usually forced) to relinquish their basic sovereignty and sustenance.

Adams' stated reflections on the many Native peoples he encountered were ambivalent, at times sympathetic and at others dismissive. Adams was prone, like many Anglo-American men of the day, to make generalizations about diverse groups of Native people they took to be more or less culturally homogenous. Adams often referred to his Indian guides as “savages,” yet in the same breath marveled at their prowess chasing down athletic buffalo. “Talk about steeple chasing,” Adams wrote after a buffalo hunt, clearly awestruck by “the way these savages run Buffaloes in the mountains; up hill, and down, over fallen trees, rocks, and holes at full speed.” Adams was relieved that he “could see the chase every now and then appearing and disappearing,” but was “not called upon to take an active part.”

Adams’ personal relationship with Native Americans went beyond mere confusion or coercion. According to the reminiscences of a colleague, Granville Stuart, Adams informally married a Flathead woman named Louise in February 1862, apparently by consent of her stepfather, but the couple soon went their separate ways. In October of that year, Adams returned to the Flathead camp and kidnapped “his little boy from the Indians,” wrote Stuart years later. “The little fellow,” Stuart continued, “cannot speak English and is weeping bitterly for his Indian relatives.” Later that night, Stuart and some of Adams’ friends convinced him to return the child to the tribe. “The child is once more happy,” reported Stuart.[1]

This bizarre episode, briefly recorded in an acquaintance’s memoirs decades later, comes to us in the present woefully incomplete. The timeline doesn’t add up—barely eight months had passed between the February marriage and the October abduction. Even if Stuart merely got the dates wrong, other questions remain: why had Adams and Louise’s relationship dissolved so quickly? What was Adams’ plan in kidnapping a small child from the only world he’d ever known? In the years afterward, did Adams regret the situation, or feel powerless to be present as the child’s father?

Adams does not refer to his child or its situation in these journals, a predictable kind of silence. Anglo-American men out West routinely married Native women and bore children with them, only to move on to greener pastures or return East to a white society they might better recognize. It appears that Adams was simply one more of these men, surely conflicted (and therefore mute) about such a taboo union in nineteenth-century America.

Even without some kind of private reckoning sheathed within the pages of his diary, Adams was clearly a man in between: between professional obligations and private prejudices; between his home country and the "frontier" in which he roamed; and between cultures, one bent on domination and expansion and others committed to continuity and the preservation of the sacred.

So was Adams an agent of conquest? Or just a bystander in nineteenth-century America's continental kulturkampf?

So was Adams an agent of conquest? Or just a bystander in nineteenth-century America's continental kulturkampf? Are his journals evidence of collusion in genocidal policy, or mundane recordings of average men trying to make a buck and survive way out West? Historians exploring the worlds of the past and its people must reckon with such moral quandaries, even if there are no easy answers. Lest we forget too that the record we inherit to make sense of our national story comes to us only in fragments, and archives don't—and won't—speak for themselves.