Writing the Journey into the Nineteenth Century American West

Beginning in the 1840s, through gradual migrations, explosive gold rushes, and the completion of the first trans-continental railroad in 1869, hundreds of thousands of people headed West from the United States into its territories and beyond.

The Louisiana Purchase (1803), the Oregon Treaty (1846), and American victory in the U.S.-Mexico War (1846-1848) had conferred most of the western half of the continent to the United States by midcentury. Promises (or, perhaps, fantasies) of cheap farmland, instant mineral riches, and escape from industrial despair brought single men and families alike hundreds or thousands of miles afield from the only world they'd ever known—and into Indigenous worlds of staggering complexity and diversity. Trails blazed by (in)famous explorers—from Lewis and Clark to John C. Frémont to Zebulon Pike—shepherded wagon trains across the rugged terrain and harsh weather of the Great Plains, Rocky Mountains, Columbia Plateau, and Southwestern deserts. They were bound for Santa Fe, the centuries-old trading hub, or Sacramento, the nexus of the California Gold Rush, or Salt Lake City, the capital of the Mormon utopia Deseret, or Puget Sound, or the Black Hills of Montana, or the coal mines of Colorado—the list goes on.

A Man in Between: The Journals of Surveyor, Artist, and Indian Agent Thomas Adams

The Western Sublime: Manuscript Diaries of the Overland Trails

Once they got there, these newly minted Westerners—simultaneously weary migrants and brash invaders—profoundly disrupted the social and environmental cosmos of the vast region that many at the time called a "frontier," a regenerative setting free from the burdens of modern industrial life. Westering men and their families encountered and ultimately displaced the Indigenous peoples who already occupied the land, not to mention powerful landed classes of Mexican-Americans across the Southwest and other newcomers from Latin America, China, and Europe. These Anglo-American settlers ventured west for a wide range of reasons: to drive cattle, escape poverty or trouble, search out precious metals, execute government surveys, serve in the military, or to just get away. To start over.

They also wrote. A lot. 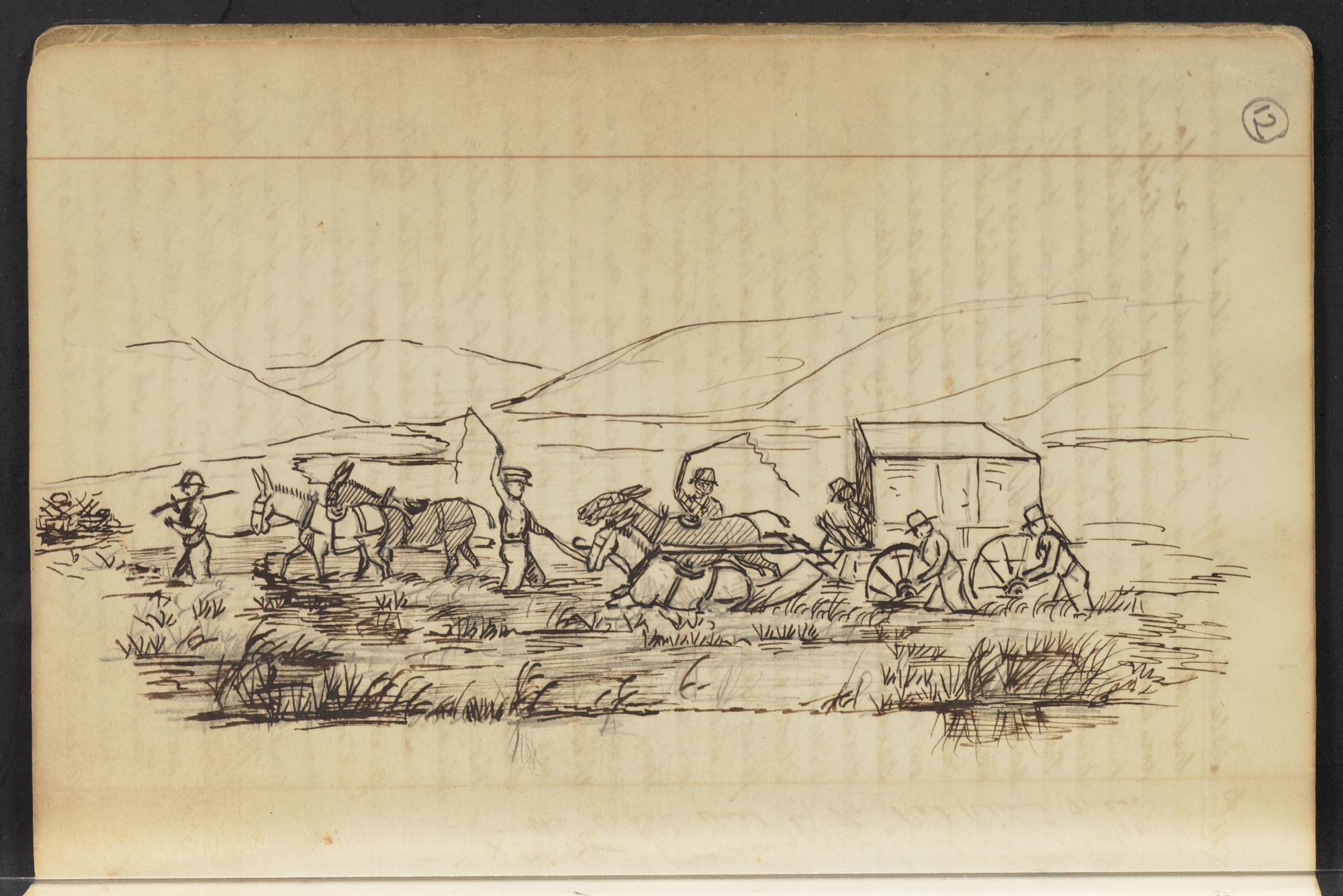 Some kept detailed journals of their travels, complete with sketches of their surroundings. Others wrote terse accounts of goods purchased or landmarks encountered. Some produced eloquent descriptions; others were barely literate. Some writing was meant only for the eyes of the author; others wrote letters to loved ones at home or the men who employed them.

Dexter P. Hosley's journal from Saint Joseph's to California by the overland route, 1852

Diary of an officer on John N. Macomb's Expedition in Utah, 1859

Diary: "The Travels of Chester King in the South West"

Each journal and collection featured here contains many stories and choice scenes from the past, but archival material does not speak for itself. As urgent conversations continue between historians, librarians, archivists, and curators about the ethics of collecting, describing, and owning material plundered in conquest or crafted to justify it, readers might consider how and why these particular journals and manuscripts survived the intervening years at all. What do we consider valuable about the remnants of the past, and why? Whose stories get to be told, and whose don't?

The Princeton Collections of the American West, part of Princeton University Library’s Special Collections, hold these letters and manuscripts. Professor of History Martha A. Sandweiss and Curator of Western Americana Gabriel Swift were awarded a 2020 Rapid Response Grant from the Princeton University Humanities Council to transcribe these manuscripts for better access and research potential. Three graduate students from the Princeton History Department—Poorvi Bellur, Kate Carpenter, and Brian Wright—transcribed, annotated, and researched the manuscripts and wrote the essays featured in this exhibition.

Rose Early, Grass Scarce: Writing the Journey into the Nineteenth Century American West highlights this work, introducing some of the men who wrote of their travels. Here you can access digitized files of the manuscript material and read annotated transcriptions of journals and correspondence, from Native American treaty negotiations in Montana Territory to Army life in New Mexico Territory to railroad surveying in the Great Basin. Four feature essays highlight some of these collections' most noteworthy content, and go beyond to explain how Princeton staff, faculty, and students brought these stories to life.