The story of the Exodus, commemorated during Passover and recounted in a text called the Passover Haggadah, has served as an inspiration to freedom-seeking movements throughout history, for non-Jews and Jews alike. During and immediately after the Holocaust, Jews engaged in a form of spiritual activism by integrating a resistance mindset into their observance of Passover, adding to the traditional text of the Passover Haggadah to tell the story of the Holocaust. This laid the groundwork for rebuilding in their own individual lives and as a nation. These Haggadot (plural of Haggadah) illustrate this form of activism, alongside items that document more traditional forms of resistance. 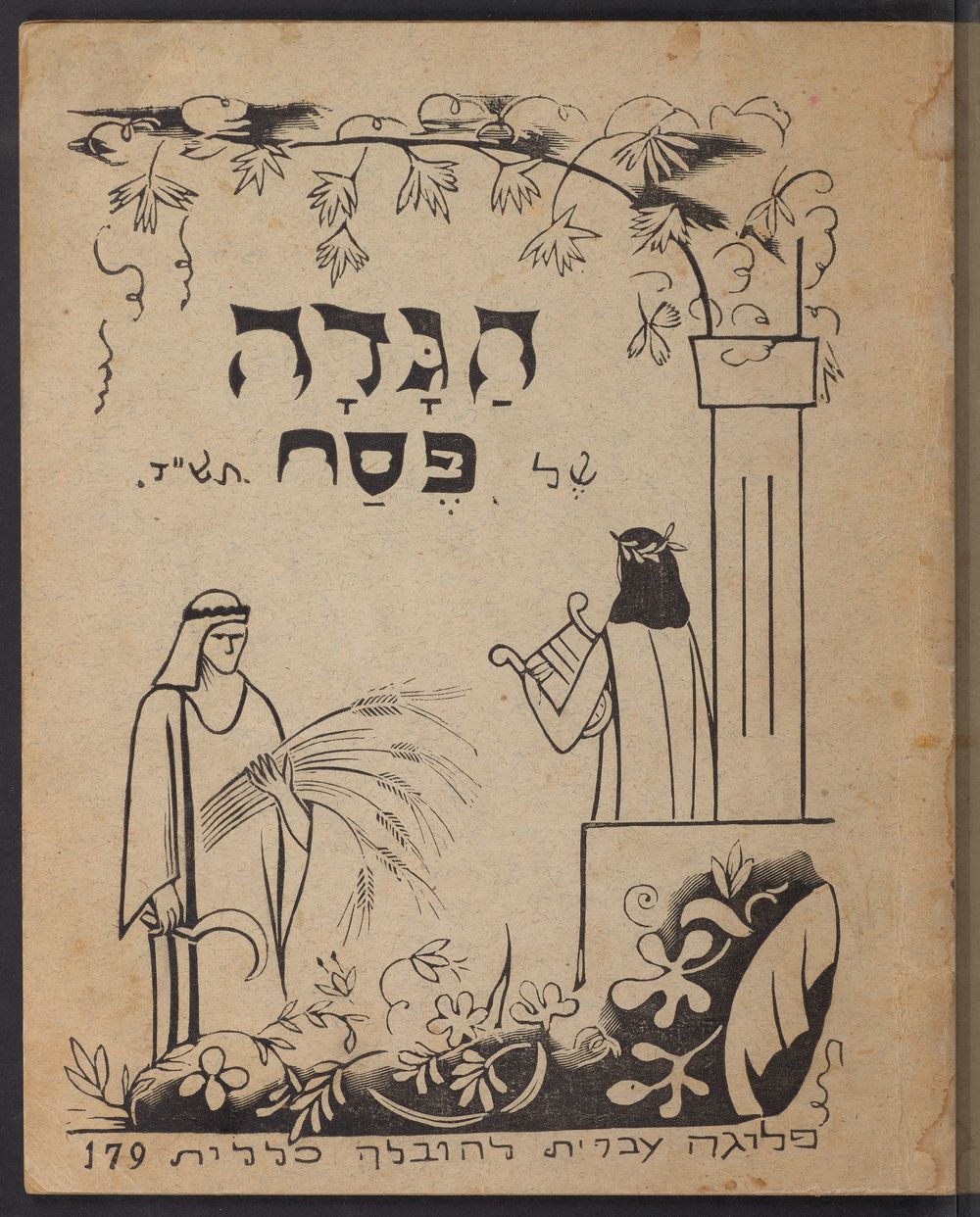 “We are dining together, Jewish soldiers from all over the diaspora. Our hearts are celebrating [Passover], but our hearts are also agitated. Our hearts are agitated because Egypt is not yet finished with Israel. Because the whole world is our Egypt.” Thousands of Jews from British Mandate Palestine volunteered to serve with the British Army in a “Jewish Brigade” during the Italian Campaign during the Second World War. This Haggadah was written and used by members of that brigade during the Allied advance into Italy. It combines the traditional text with references to the battles these Jewish soldiers were then fighting. The text metaphorically compares Egyptian slavery to the Nazi destruction of European Jews. 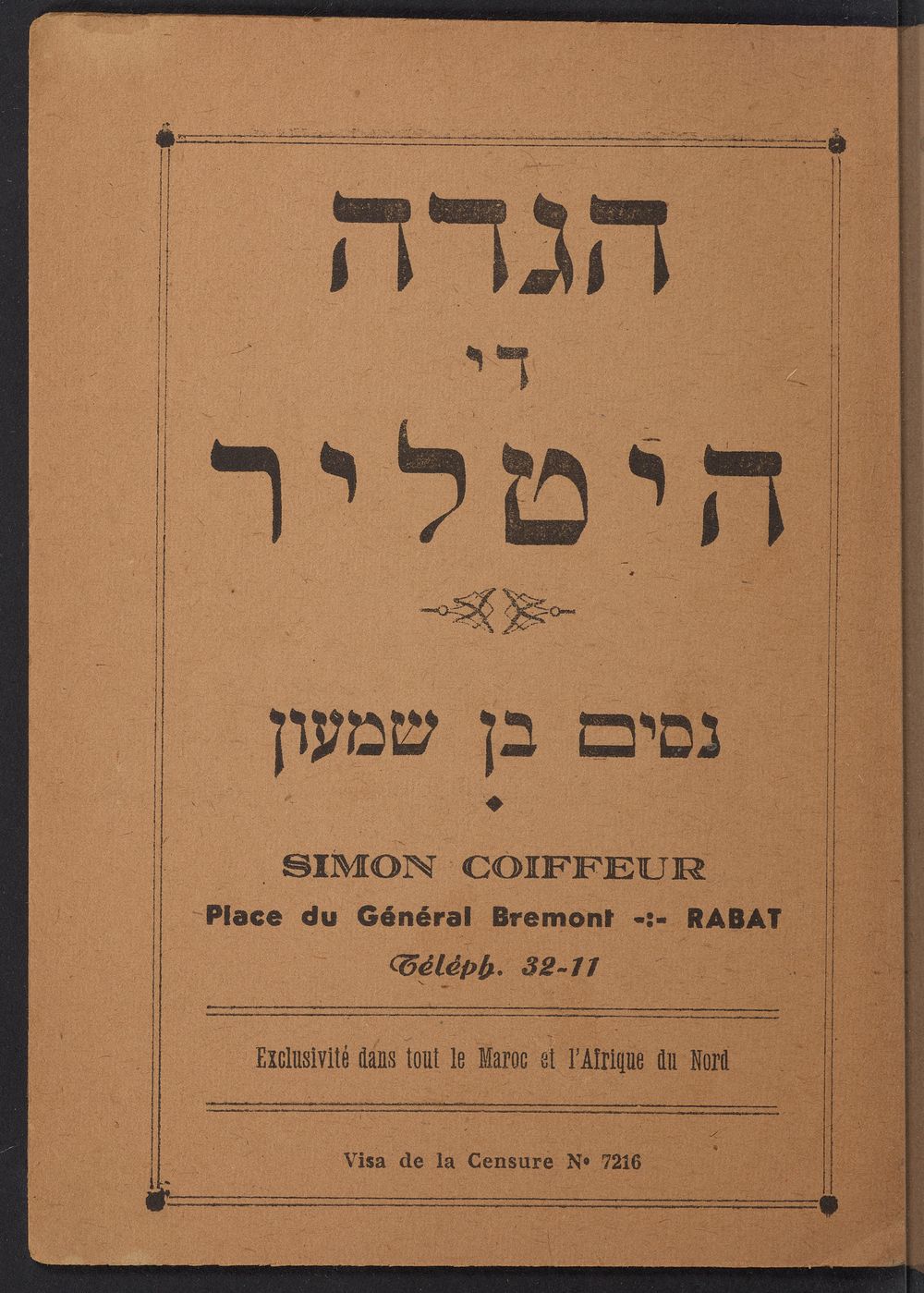 “Wicked Hitler enslaved us and the Allied Forces rescued us with a great and mighty outstretched arm. Had the Brits not come, nor the Yanks, we would not have been saved…” (Trans. by Adi and Jonnie Schnytzer). Written in Morocco during the war, it is jarring to see the word “Hitler” in Hebrew – ​​היטליר – splashed on the cover of a Haggadah. The Judeo-Arabic text follows the structure of a traditional Haggadah, but tells the story of the war up to 1943, focusing on North Africa. It employs colorful language to laud the Allies and mock the Germans, its publication therefore an act of bravery and activism as the war still raged. 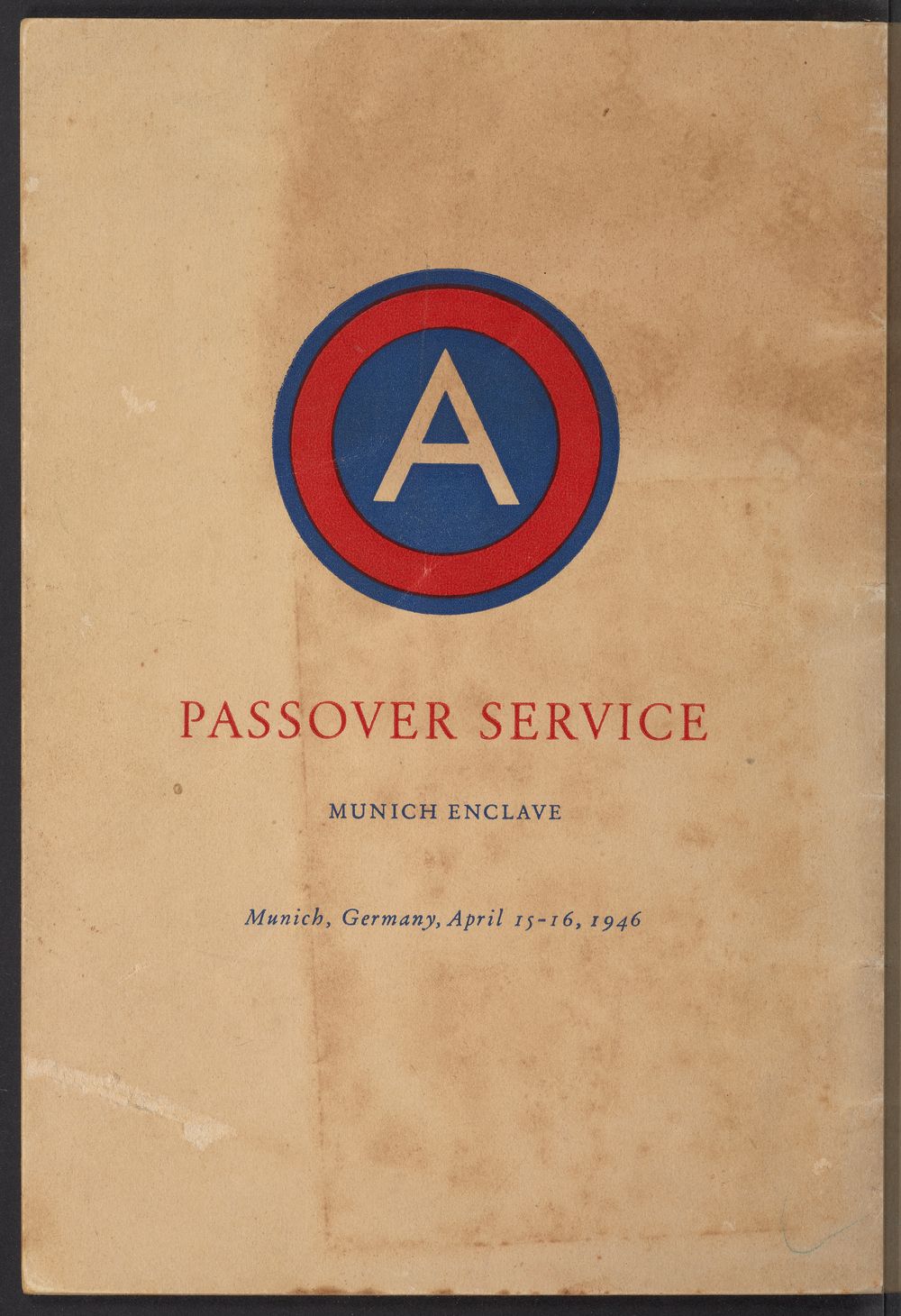 Known as the “Survivors’ Haggadah,” this Haggadah was published by Holocaust survivors to celebrate the first Passover after liberation. The text and illustrations interweave the story of the Holocaust with the traditional Haggadah text. It also takes an activist role, calling desperately for a “Survivors’ Exodus” from displaced persons camps in Europe to the Land of Israel, where their lives and the lives of the Jewish people will be rebuilt. 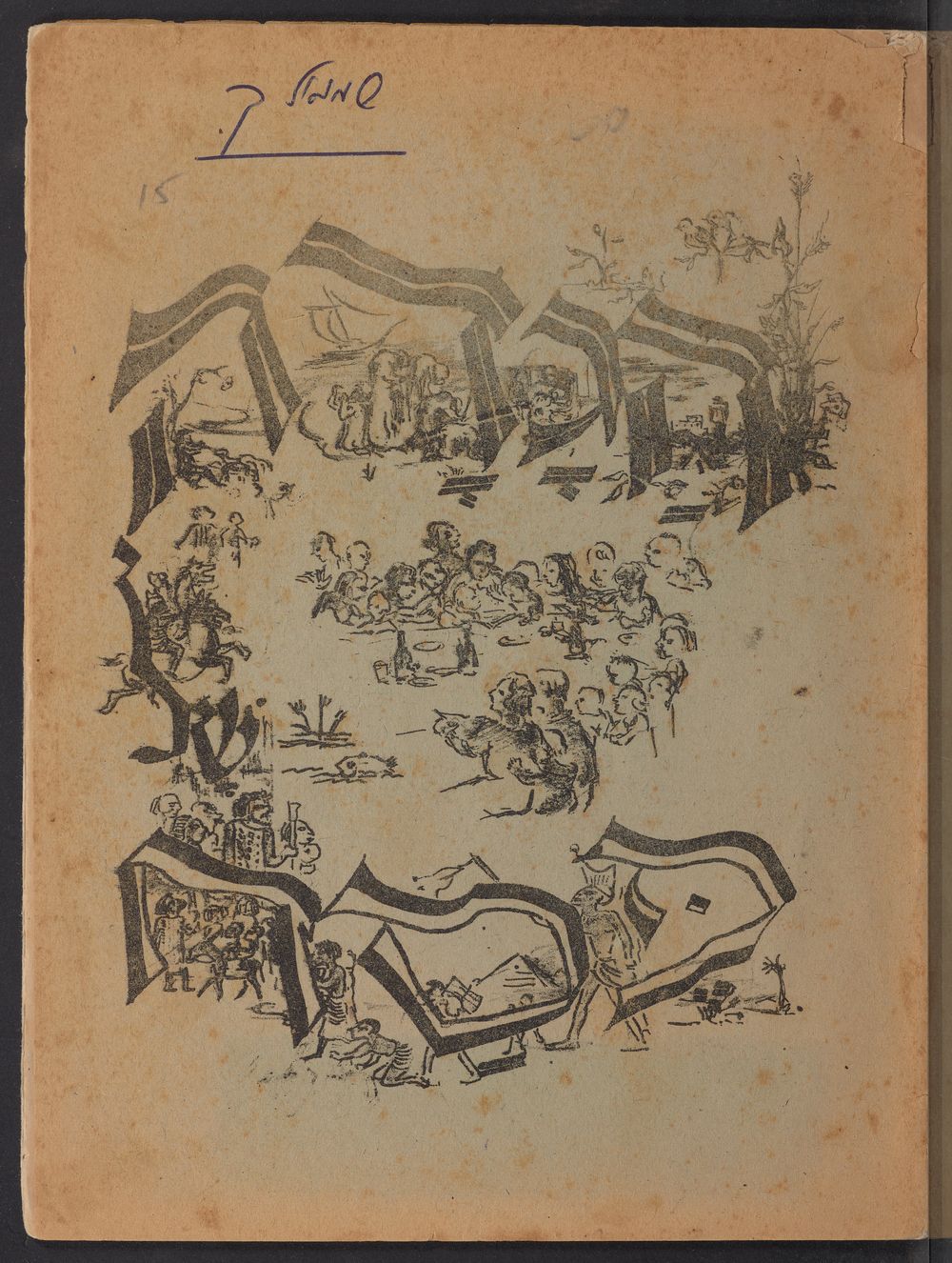 This non-traditional Haggadah integrates the information about the events of the Holocaust into its text. It characterizes Europe as “one great house of slavery,” and lauds Jewish fighters who took up arms and fought back: “In the darkness of cellars and thickets of forests our hands learned to take up arms, kill enemies...and rejoice over all the evil killed, over every wrecked carriage and over every ruined train...” 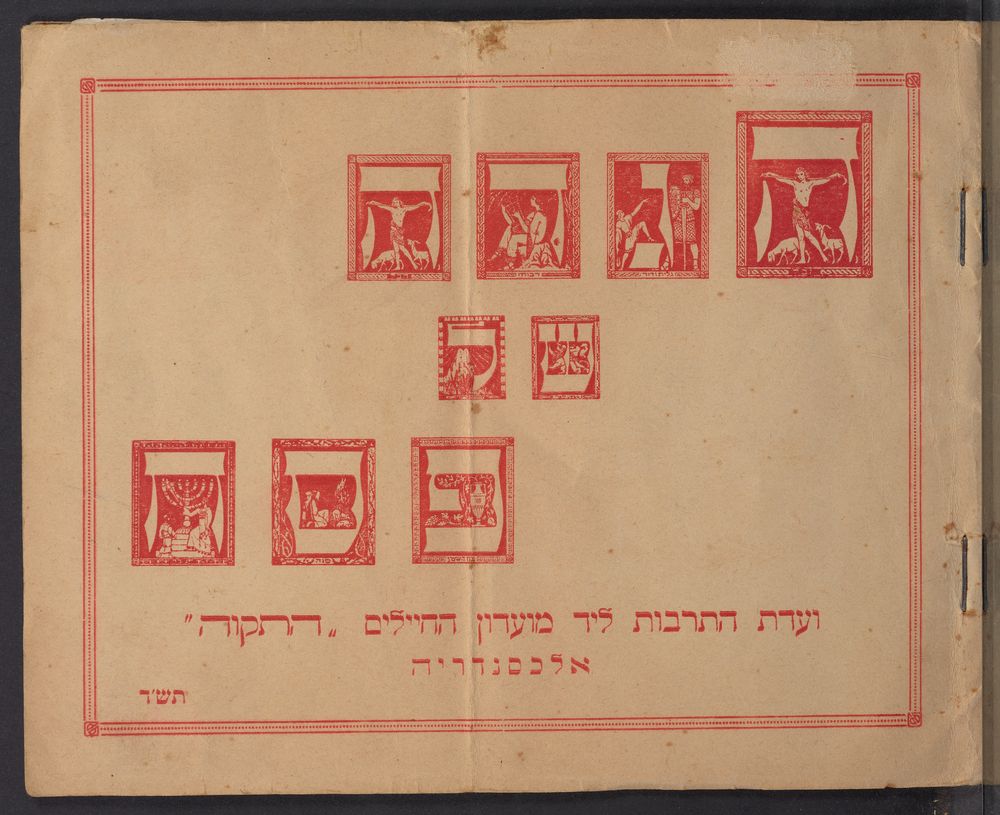 This illustrated Haggadah was published by Jewish soldiers who volunteered to fight with the British. It includes the traditional Haggadah text along with supplementary readings. It calls for revenge against the Nazis, comparing them to the Biblical Amalekites, who attacked the Israelites after the Exodus. Parts of this Haggadah are specifically reserved for recitation by women, making it a rare source that documents the role of women in Jewish resistance during the war. 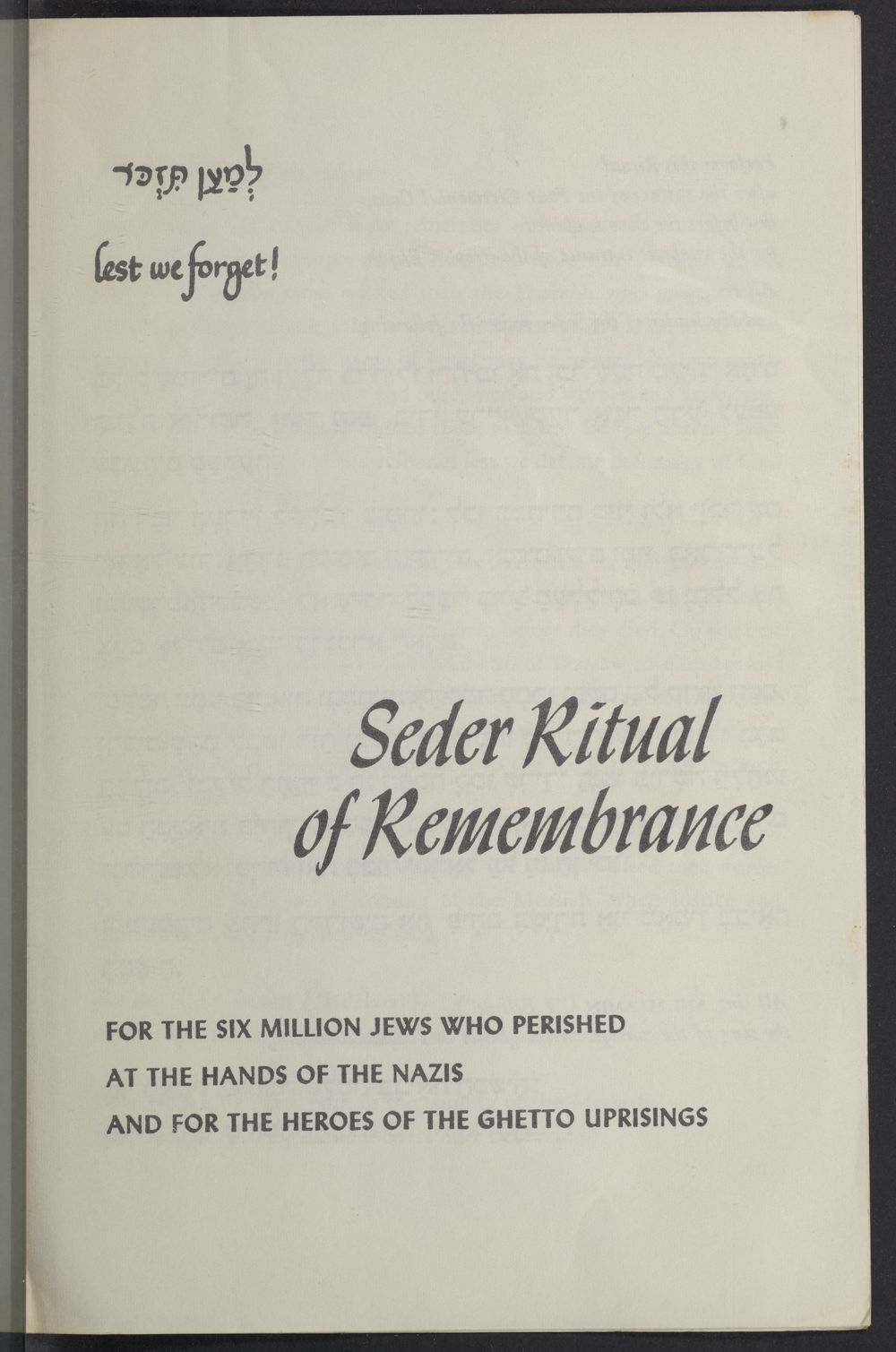 Lest we forget! Seder Ritual of Remembrance: for the Six Million Jews who Perished at the Hands of the Nazis and for the Heroes of the Ghetto Uprisings, 1953-1964

“On this night of the [Passover] Seder we remember with reverence and love the six million[] of our people…who perished at the hands of a tyrant more wicked than the Pharaoh who enslaved our fathers in Egypt.” This pamphlet was meant to be inserted into the traditional Passover Haggadah. Its text memorializes the Warsaw ghetto uprising, which it notes occurred on Passover. It compares those who fought in Warsaw to Judah the Maccabee, the military leader of the successful Jewish uprising against the ancient Greeks celebrated on Hanukkah. This short text therefore connects three examples of Jewish resistance, those of Passover, Hanukkah, and the Warsaw ghetto. 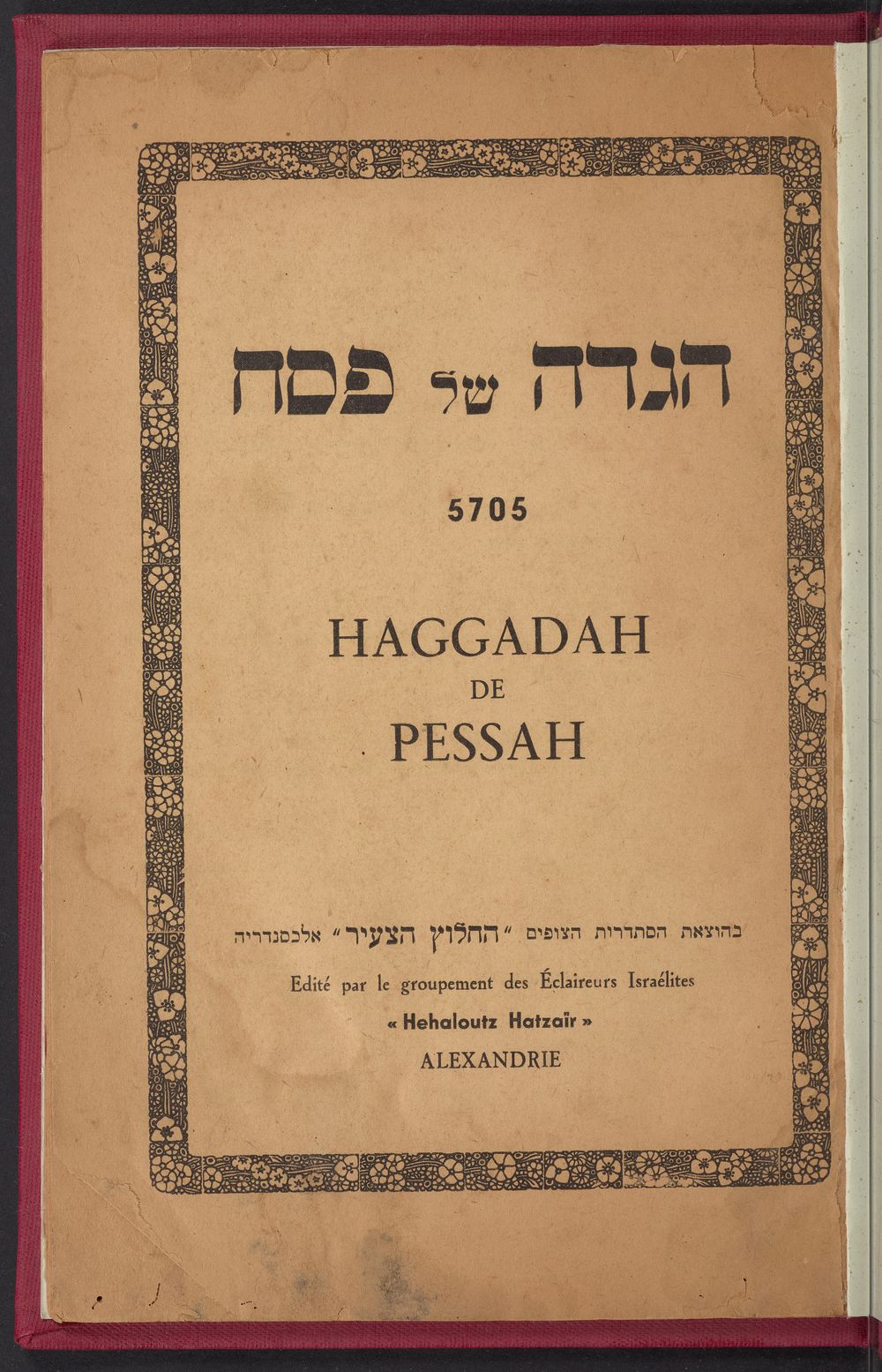 This traditional Haggadah adds a preface in Hebrew and French that connects the ancient Jews hunted by the Egyptians to the Jews then currently being hunted and murdered by the Nazis. That this Haggadah was published and used in Alexandria, Egypt adds poignancy to this comparison. 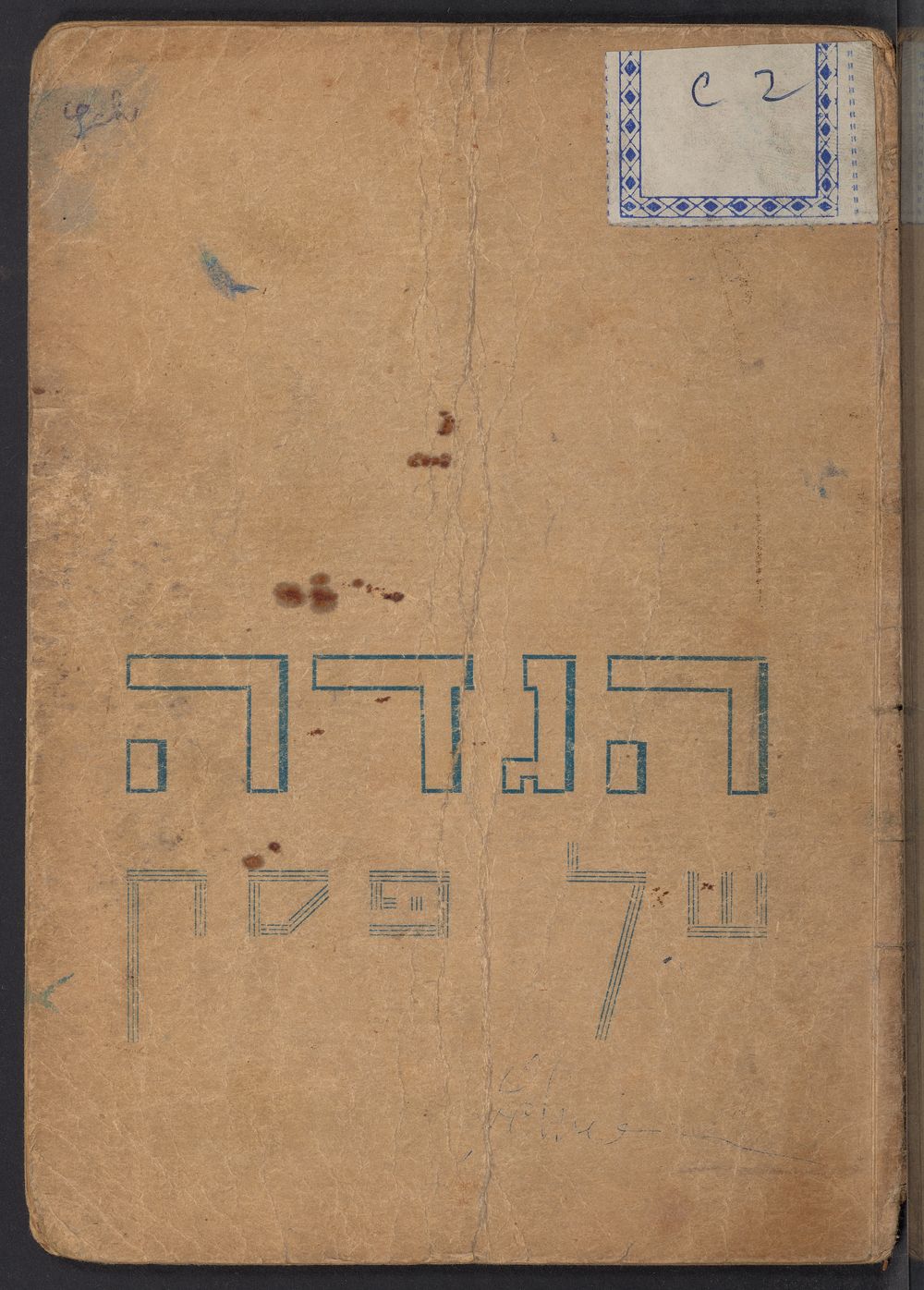 This is a traditional Haggadah published in Europe shortly after the Holocaust. It contains letter on back from publisher in Yiddish which describes Holocaust as a greater destruction than the First and Second Temples, and which implores survivors to preserve Hebrew publishing in Europe. 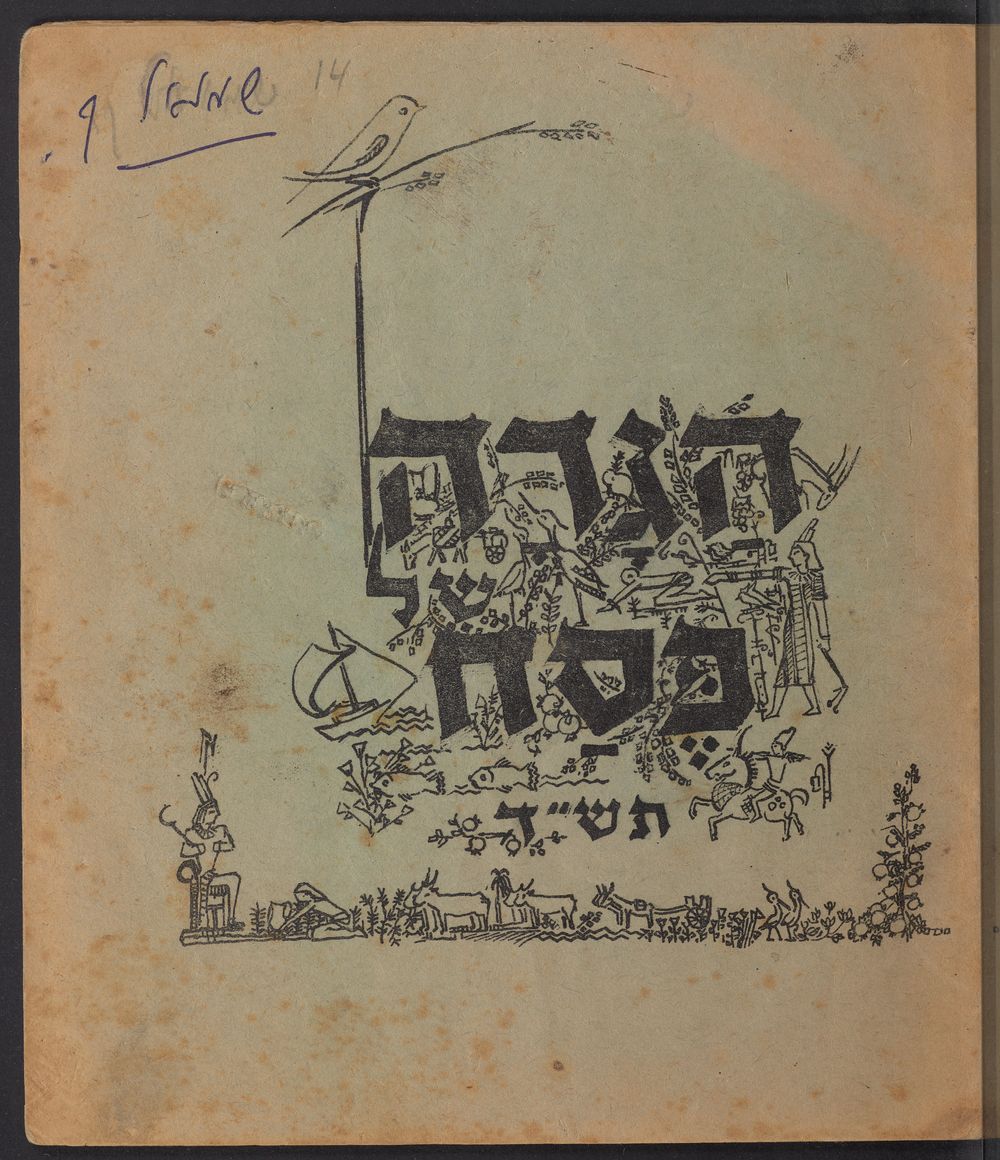 Kibbutz Haggadah, published in British Mandate Palestine during the war with many references to the suffering of the Jewish suffering in Europe.