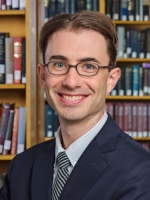 The Western Americana collection began in 1947 with the gift of printed materials and manuscripts focused on overland narratives, the cattle trade, and the Rocky Mountain West collected by Philip Ashton Rollins, Class of 1889. When the Rollins collection took its place in the newly opened Firestone Library, Princeton’s interest in the American West was clearly set. Over the course of six decades, the collection expanded to include indigenous languages and the history of the American Indian, the Spanish Southwest, the Church of Jesus Christ of Latter-day Saints (LDS), territorial imprints, and photography of the American West.

With an endowment from J. Monroe Thorington, Class of 1915, the Library continues to build upon strengths and explore new avenues. Welcome Additions include Louis Choris’s Voyage pittoresque autour du monde (Paris, 1822), acquired with support from the Friends. This illustrated book documents native life and culture in California, Alaska, and Hawaii. Manuscript journals of Thomas Adams present first-hand accounts of frontier life by an Indian Agent in the 1850s. Joseph Smith’s Pearl of Great Price (Liverpool, 1851) completes the Library’s holdings of first printings of the LDS canon of scripture, marking Princeton as one of the few institutions where scholars can likewise consult the King James Bible (1611), Book of Mormon (1830), Book of Commandments (1833), and Doctrine and Covenants (1835). Lastly, Andrew J. Russell’s Great West Illustrated (New York, 1869) and Carleton Watkins’s Yosemite Valley Photographic Views (San Francisco, 1863-[1865]) bring two landmarks in western photography to Princeton. The former celebrates the completion of the transcontinental railroad, and the latter provides an early glimpse of what would become one of America’s most celebrated national parks.

Andrew J. Russell. The Great West Illustrated in a Series of Photographic Views Across the Continent Taken Along the Line of the Union Pacific Railroad, West from Omaha, Nebraska.