In Spite of Handicaps: Brief Biographical Sketches with Discussion Outlines of Outstanding Negroes Now Living Who are Achieving Distinction in Various Lines of Endeavor by Ralph W. Bullock

If white youth through reading these sketches gain a fuller knowledge of and higher respect for Negros, and colored youth are led to a deeper sense of self respect and pride in achievements of their kind, the book will have served its purpose 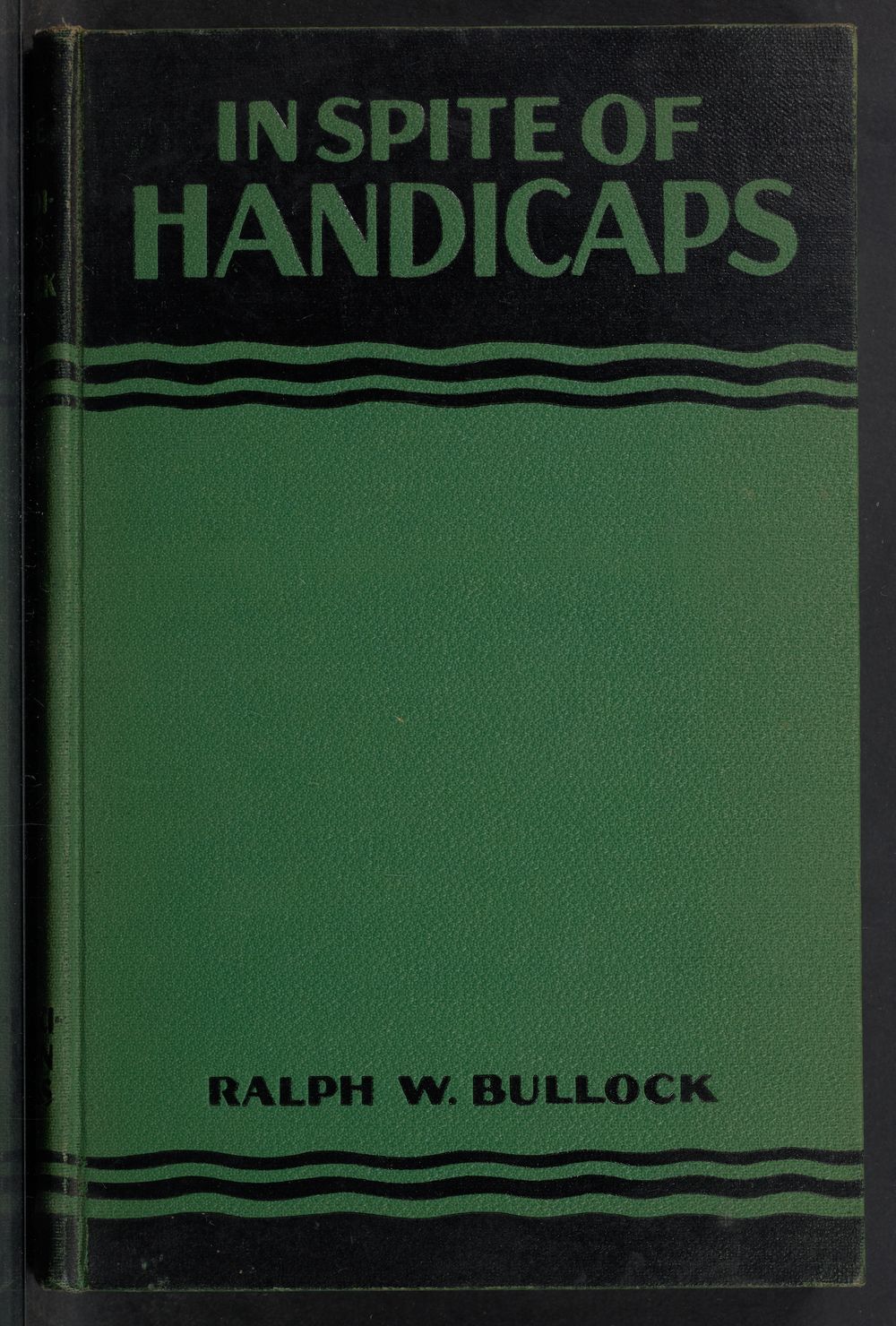 Ralph W. Bullock, then secretary of the Negro Division of the National Youth Administration, compiled this collection of short stories of successful and influential African American writers, poets, and inventors with the intention of inspiring young people. Published in 1927, In Spite of Handicaps contained 18 biographical sketches with accompanying photographs, including those of well-known figures such as George Washington Carver and Countée Cullen alongside lesser-known historical figures like mathematician and engineer Archie Alphonso Alexander and surgeon Daniel Hale Williams, who performed the first successful heart surgery. The book serves to help young people identify the varied opportunities available to them by sharing the experiences and challenges faced by accomplished figures. Bullock hoped that these sketches would both stimulate pride amongst Black youth and promote better interracial understanding with their white peers.

And God stepped out on space,
And he looked around and said:
I'm lonely --
I'll make me a world. 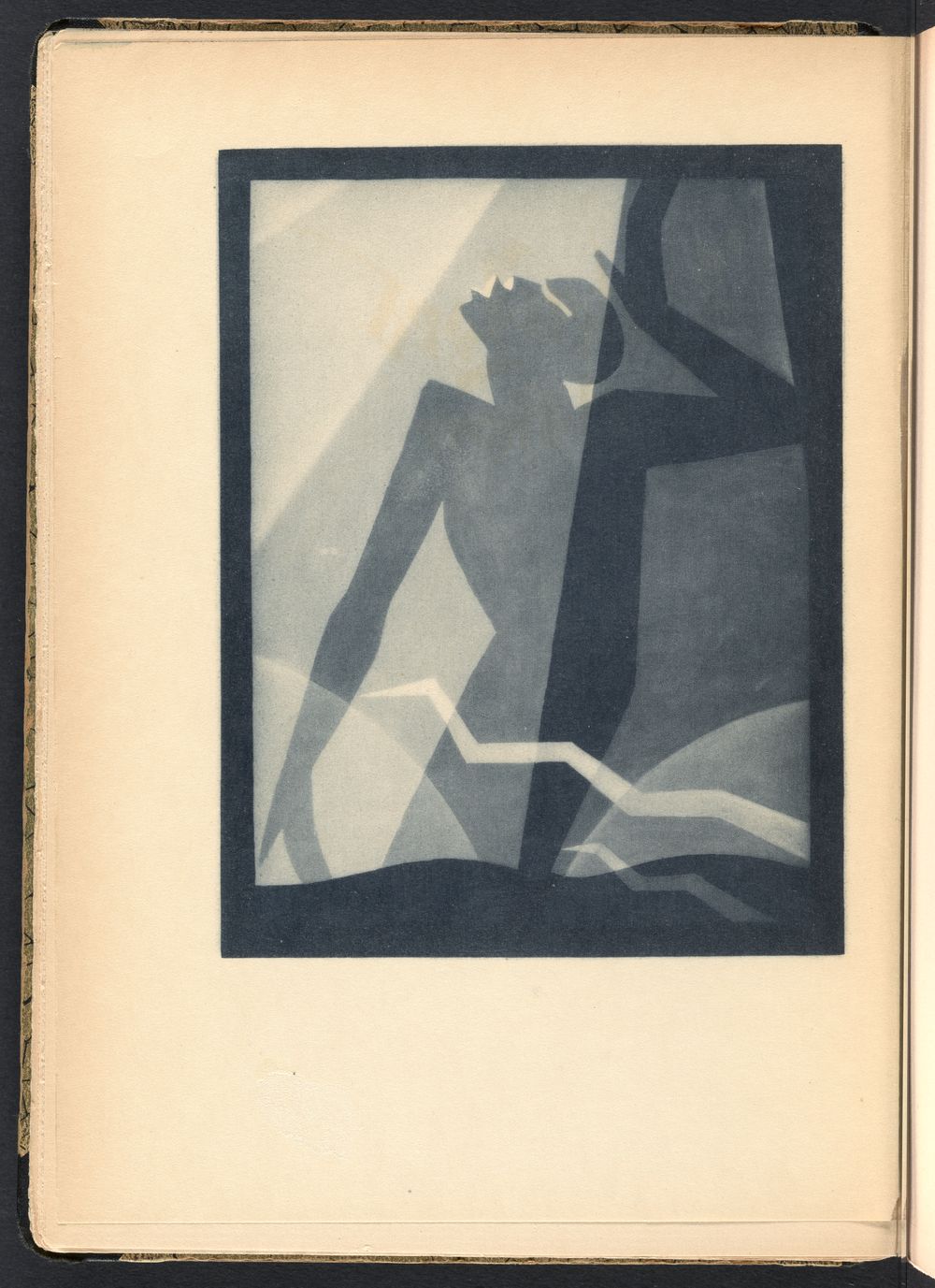 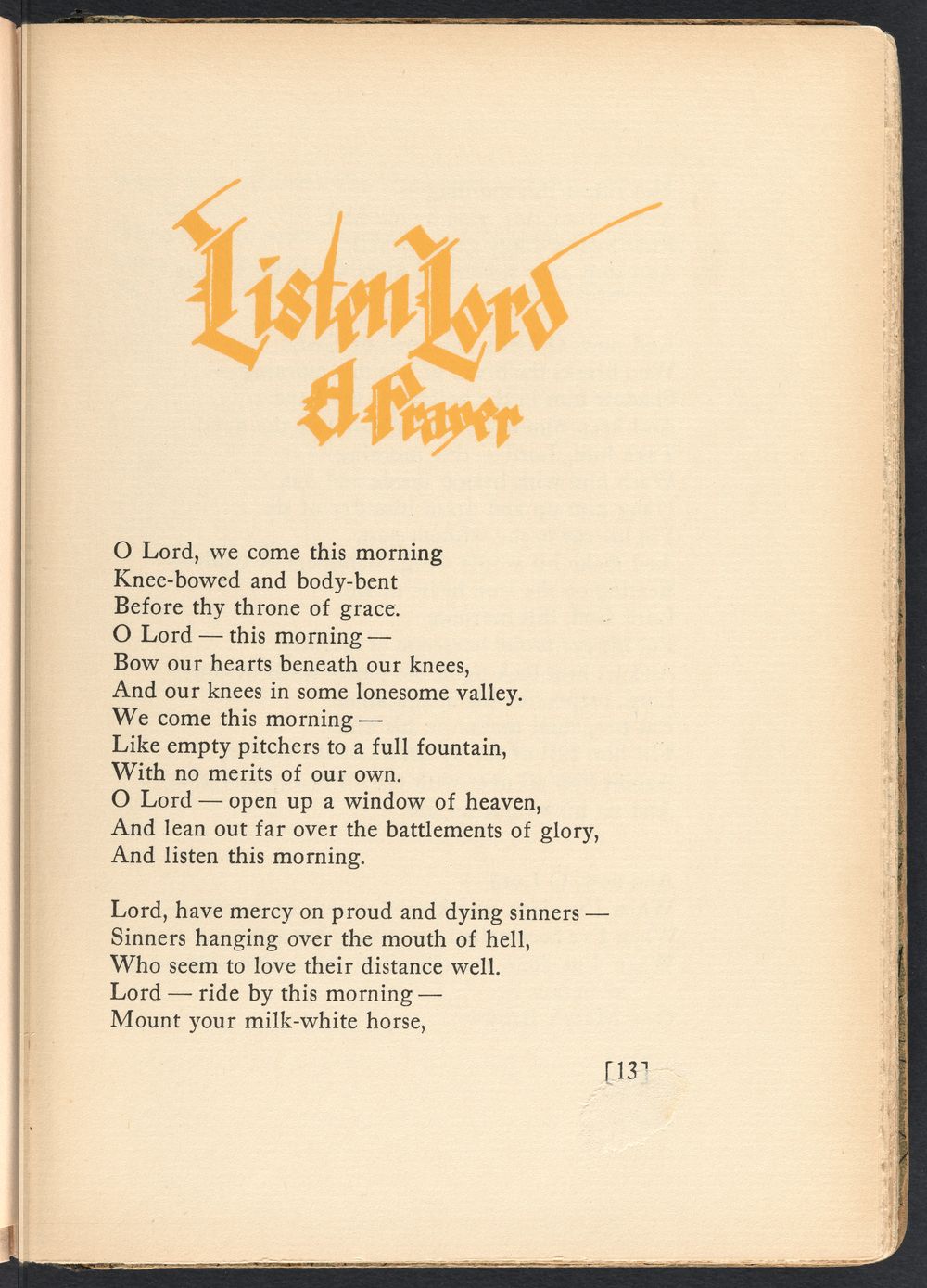 Featuring spectacular design elements created by Aaron Douglas and C.B. Falls, God’s Trombones was immediately celebrated as a treasure of the Harlem Renaissance and a classic of American poetry. Across seven poems, James Weldon Johnson (June 17, 1871 – June 26, 1938) evokes the call-and-response rhythms commonly associated with the oral and musical tradition of the black church. Punctuated by striking graphics and typography illustrating the book of Genesis, Johnson’s text investigates themes of black liberation and elevates the black preacher as the master storyteller within a Black religious context. One contemporaneous reviewer went as far as to describe the work as “one of the most original and unique pieces of literature of any Negro writer has yet produced.” (source: Park, Robert E. American Journal of Sociology 33, no. 6 (1928): 988–95.

“Whoever loves the earth, and especially whoever loves English earth, will drink delicious draughts from this book” 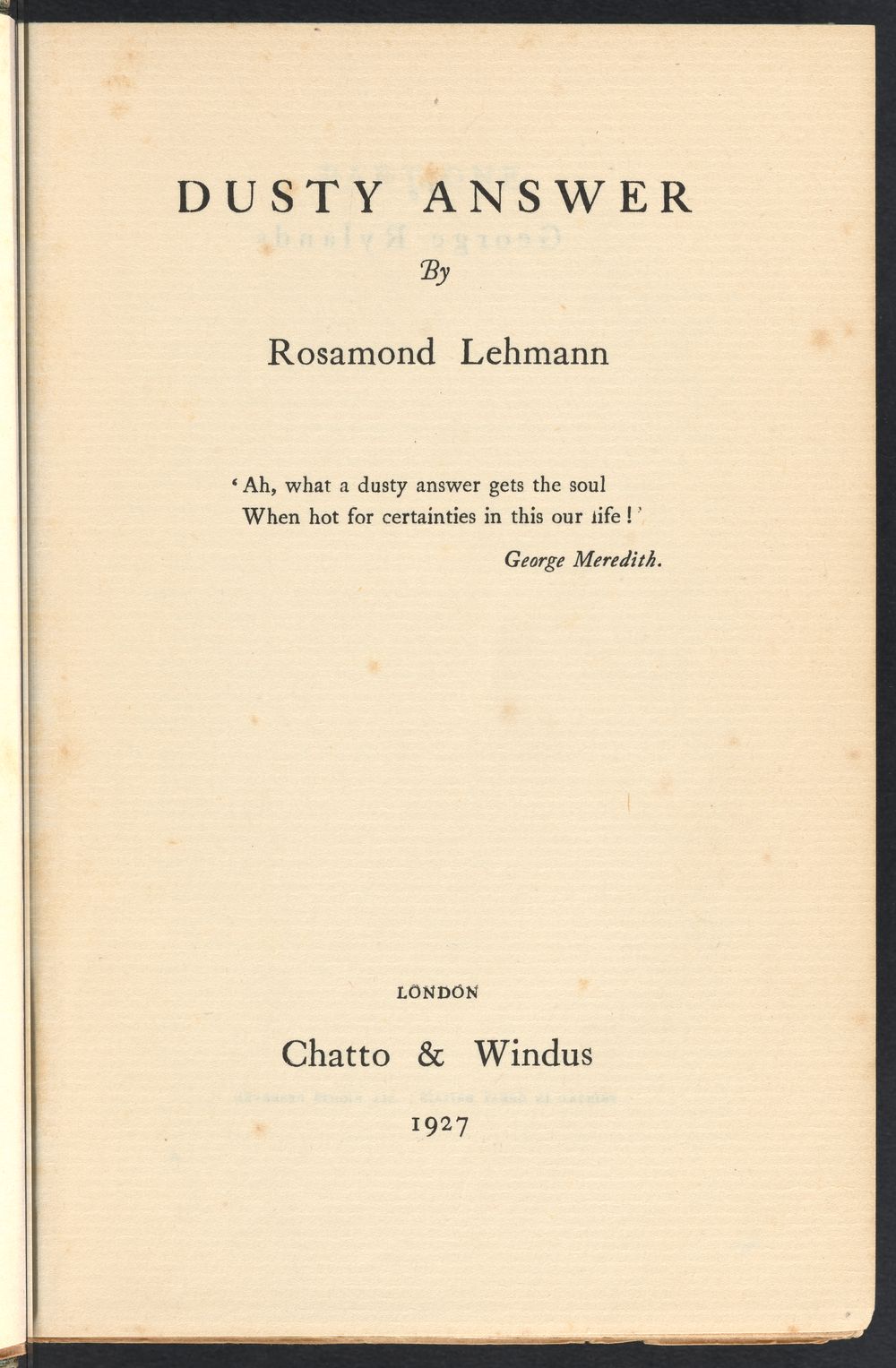 Rosamond Lehmann’s first novel, Dusty Answer, was published to little fanfare but gained attention after a review in The Guardian dubbed the novel “a landmark book of the interwar period” for Lehmann’s development of moody atmosphere and rich text. Beyond the interest in Lehmann's literary talents, readers also flocked to the book to be scandalized by the main character Judith’s sexual relationships with both men and women. Despite this early depiction of sexual exploration beyond the bounds of expected heterosexuality, however, in its conclusion, characterization of Judith, and overall perspective, Dusty Answer is disappointingly patriarchial – provocative, but not progressive.

Copper Sun by Countee Cullen with decorations by Charles Cullen

What is Africa to me:
Copper sun or scarlet sea,
Jungle star or jungle track,
Strong bronzed men,
or regal black Women from whose loins I sprang
When the birds of Eden sang?
One three centuries removed
From the scenes his fathers loved,
Spicy grove, cinnamon tree,
What is Africa to me? 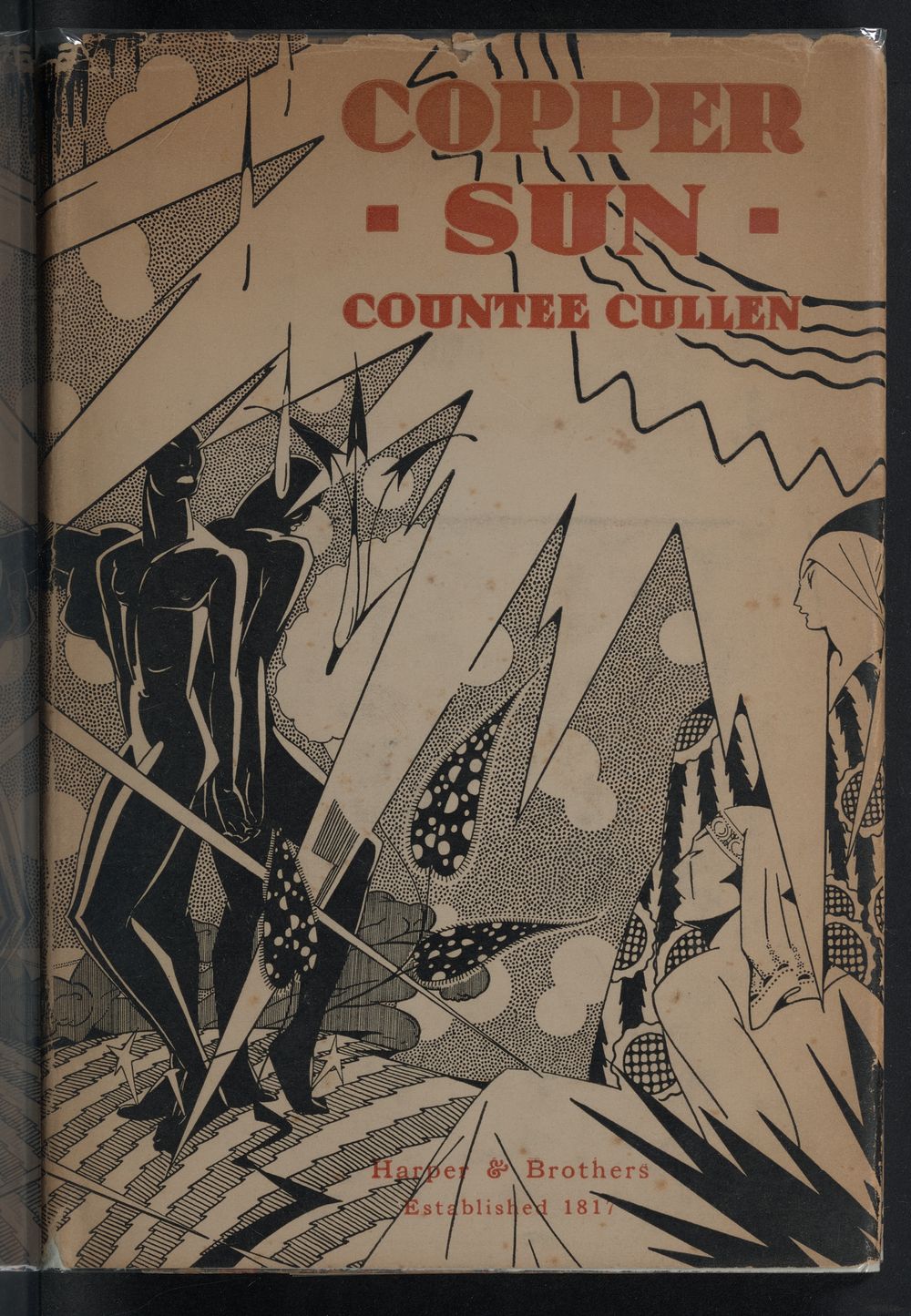 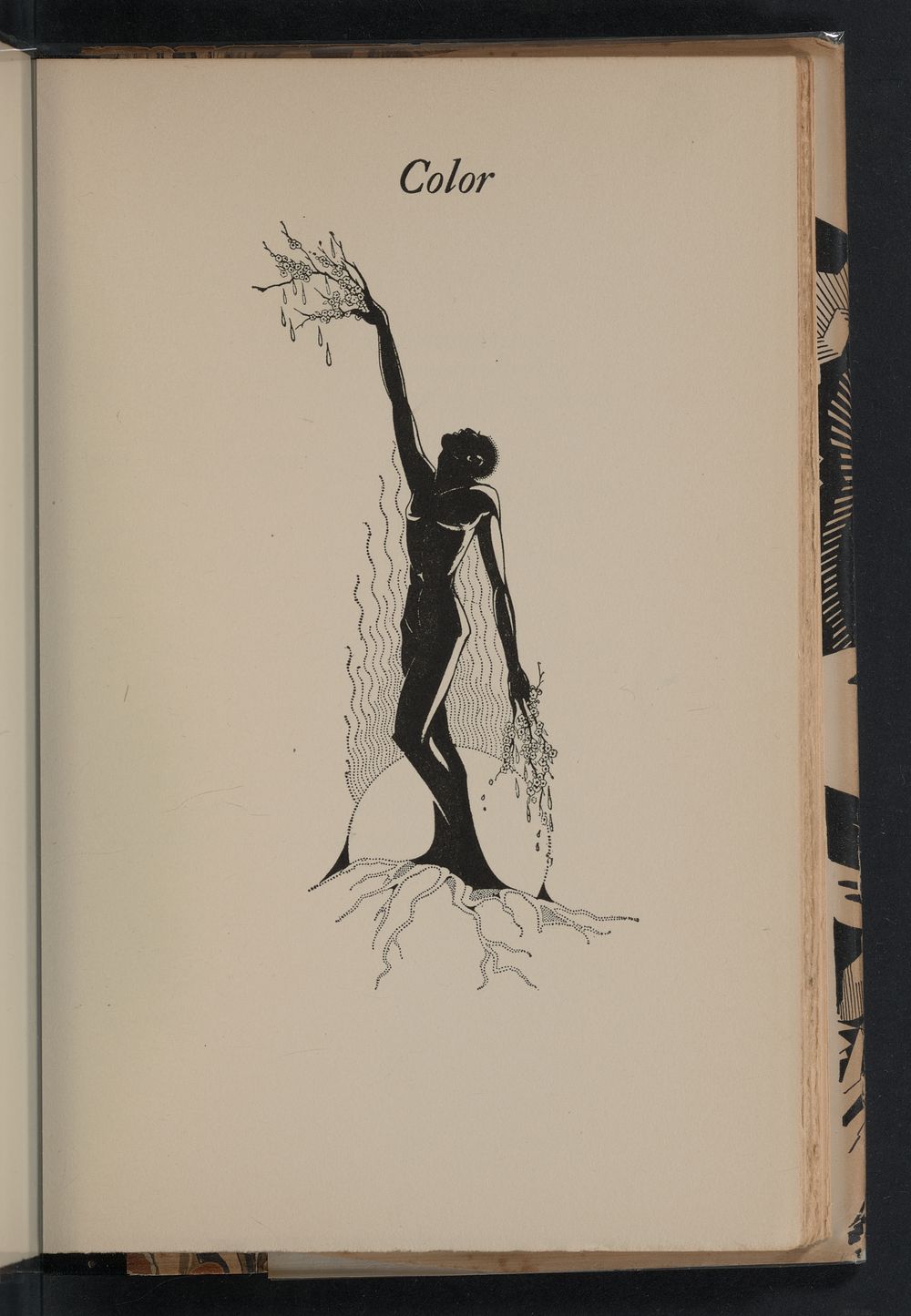 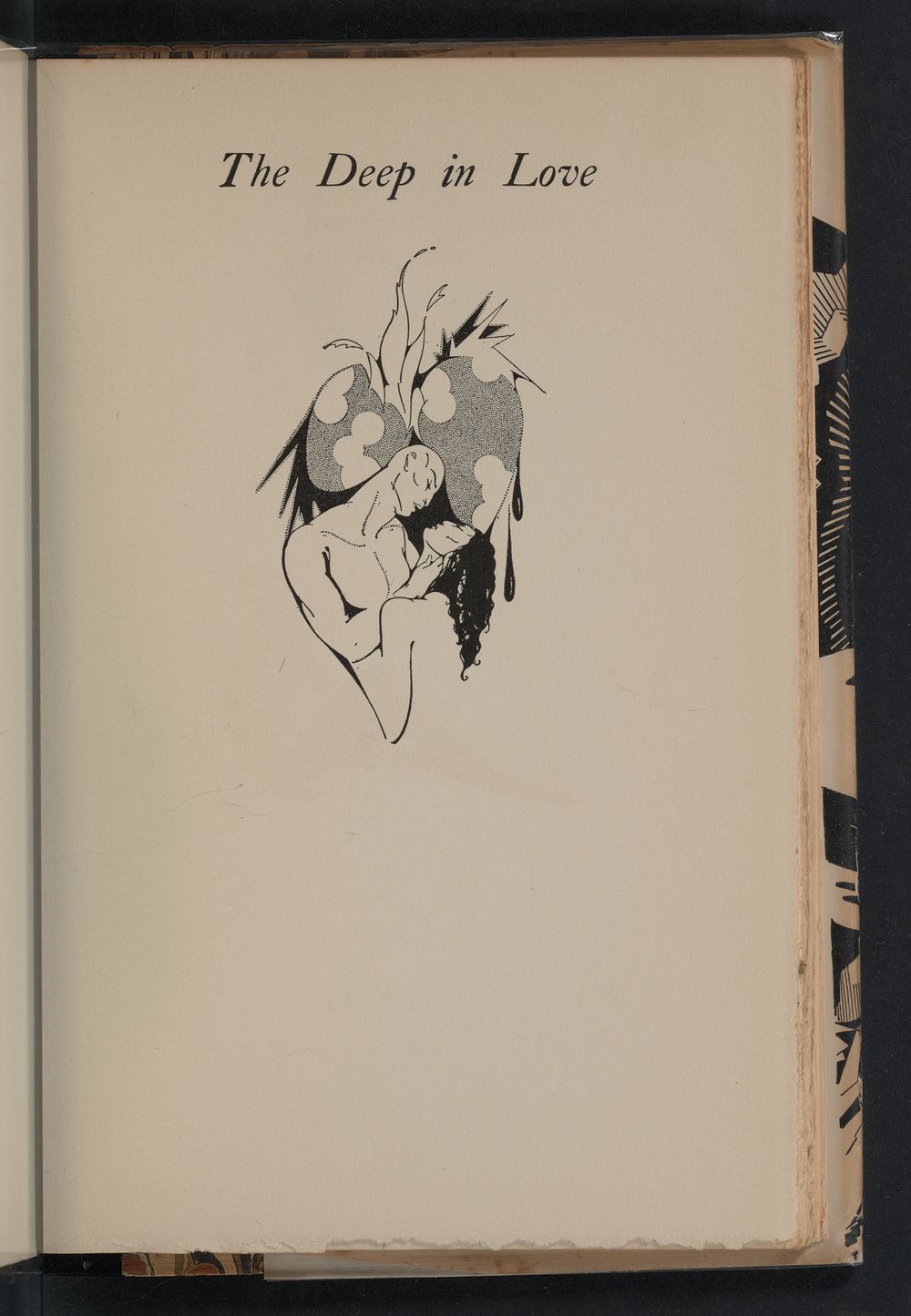 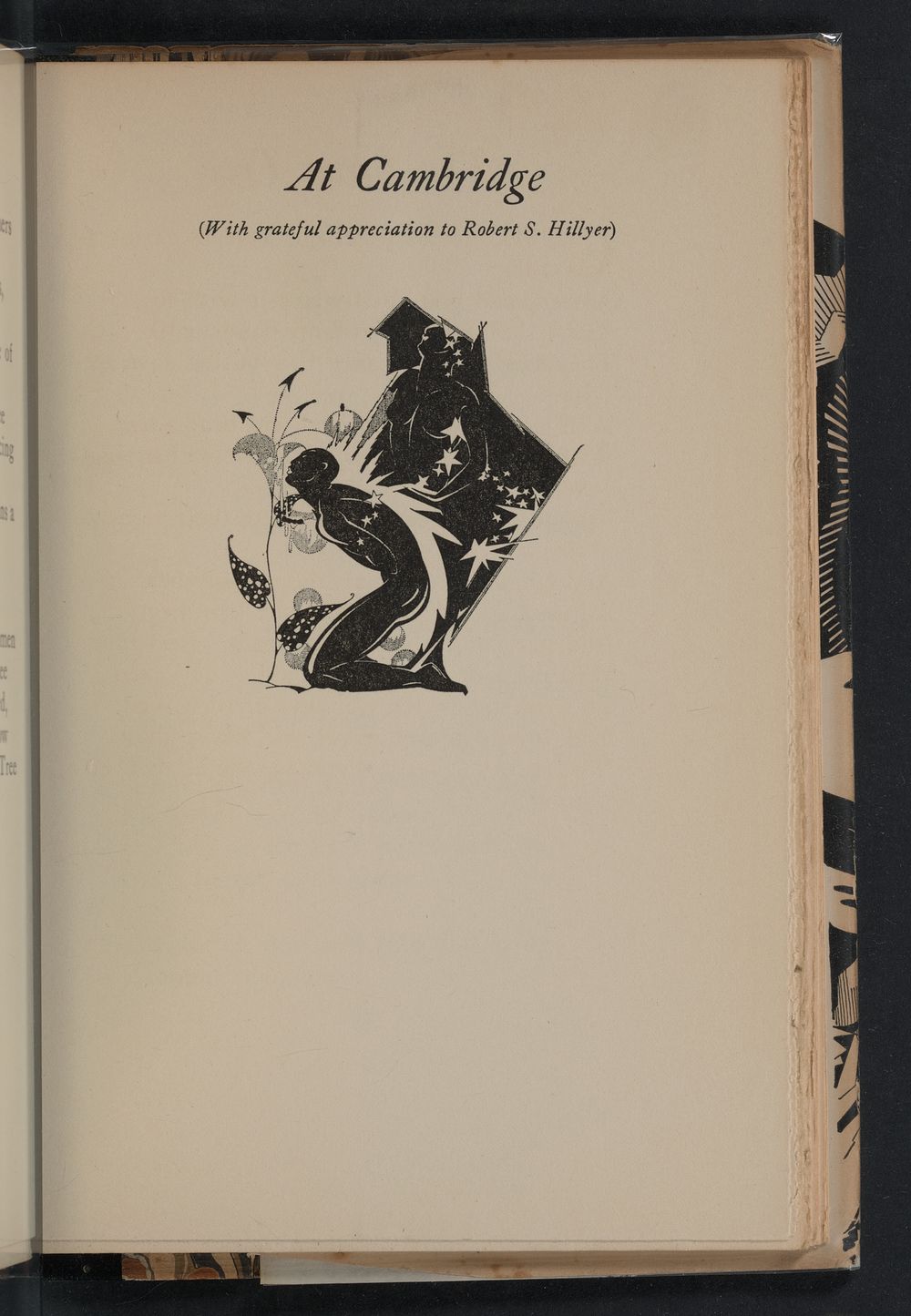 Published just two years after his groundbreaking and most celebrated work Color, Countée Cullen’s (May 30, 1903 – January 9, 1946) second book of poetry was a more modest success yet illustrates the evolution and experimentation with which Cullen approached his creative practice. Composed of 58 poems, Copper Sun illustrates a growing tension between Cullen’s anchor thematic interest. As such, the poems fall into two camps, either illustrating the experience of love (and, at times, loss) or documenting the emergence and experience of racial protests. Although Copper Sun received only modest acclaim, this second work served to cement Cullen’s relationship with Harper and Brothers, who would go on to publish all of his works. 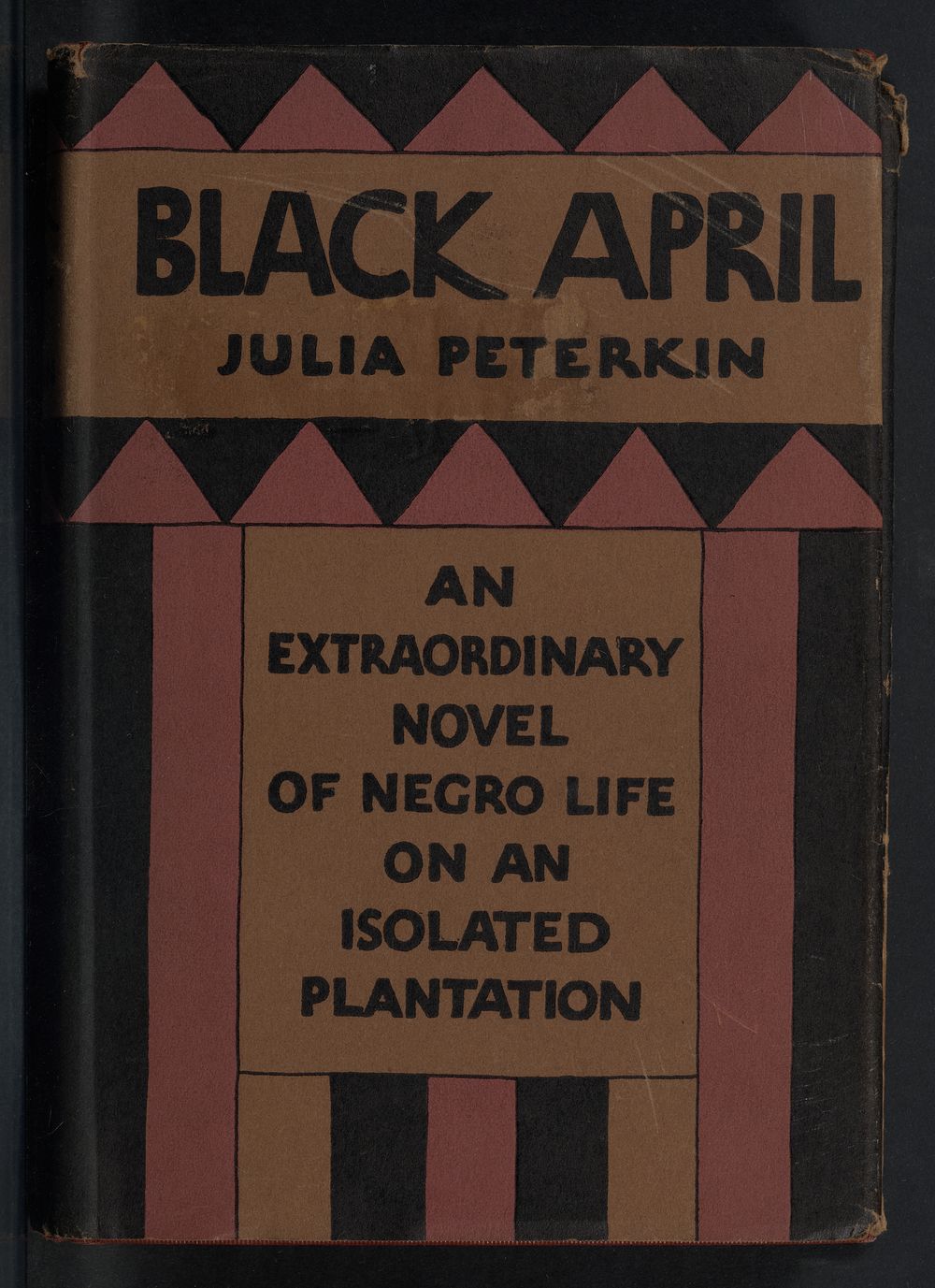 A white woman herself, Julia Peterkin (nee Mood) (October 31, 1880 – August 10, 1961) is known for eschewing the sentimentalism that characterized late nineteenth-century abolitionist and activist literature such as Uncle Tom’s Cabin for compassionate and vibrant portrayals of the Black experience in plantation-era America, particularly the Gullah people of Lowland South Carolina. Admired by the likes of W.E.B Dubois, Countee Cullen, and Paul Robenson, her second novel, Black April is also her most well-read. Argued to be an allegory for her own traumatic experiences living with a tyrannical father and undergoing forced sterilization by her husband, the book is a Shakepearian-like tragedy set on a gothic plantation detailing the downfall of the enslaved April told from the point of view of his son, Breeze, a deeply lonely boy searching for affection. The review for the book in W.E.B Dubois’ magazine The Crisis was not complimentary, finding that this novel lacked the empathy of Peterkin’s previous work, “There are bits of beautiful description and now and then just a touch of that fine sympathy with poor black folk which made Green Thursday an excellent book.” (The Crisis, June 1927 (vol 4, issue 37, page 129). Peterkin would find success again, however, and went on to be the first Southern woman to win the Pulitzer Prize for her novel Scarlett Sister Mary before fading into obscurity.

Ebony and Topaz, a Collectanea edited by Charles S. Johnson

Great emotional waves may not be stirred by taking conizance of the performances of Negroes in art and literature, but faithfullness to an ideal of proportion and fair play makes us uneasy lest through ignorance we miss something by straying into the tangles of prejudice 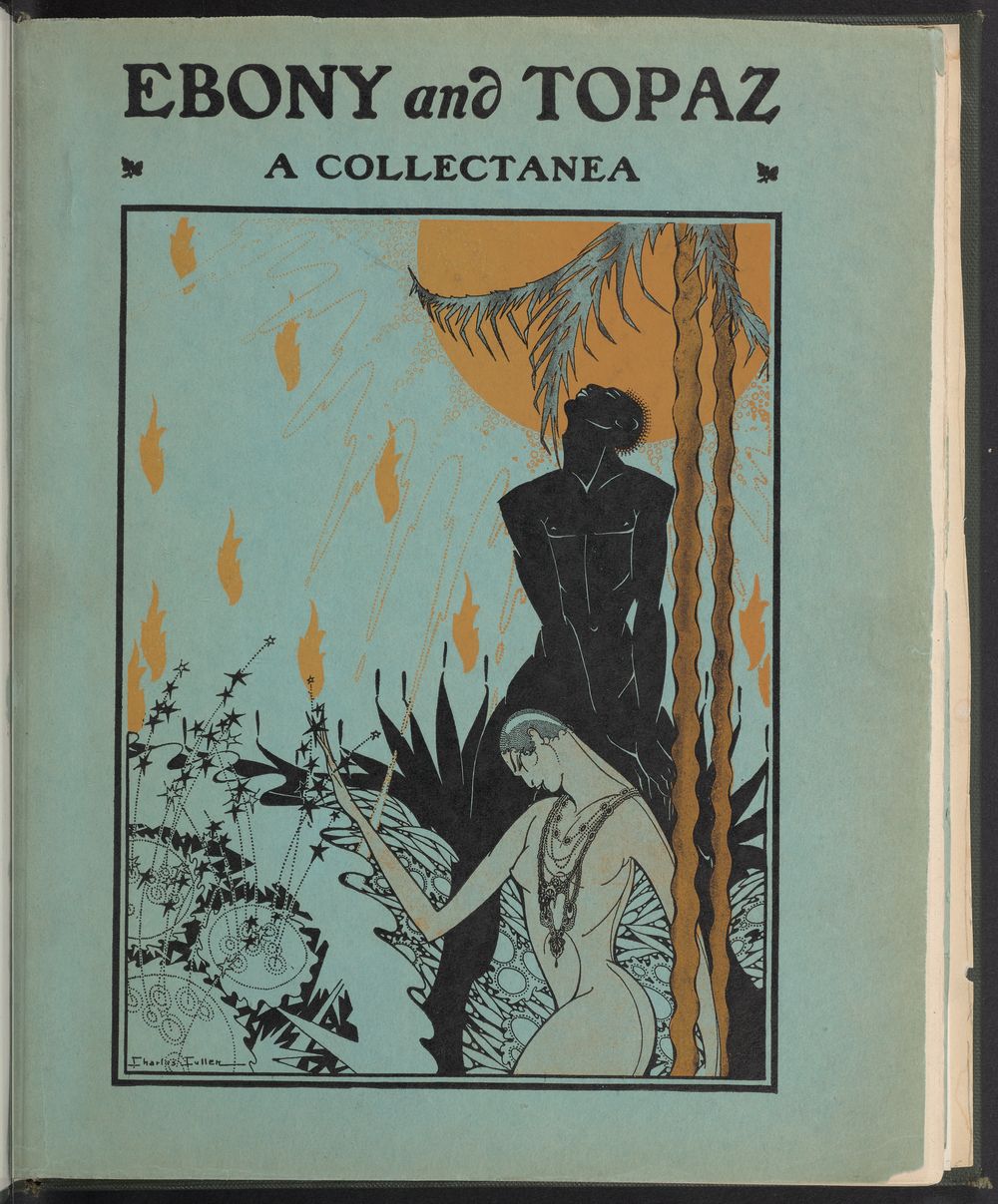 Ebony and Topaz was published as a special extension issue of the “Opportunity: A Journal of Negro Life,” an academic journal published by the National Urban League. The special issue would feature essays, art, and poetry untethered from the need to foster an understanding of Black people and Black life, which guided the editorial vision of Opportunity. Seeling to offer writers space to produce “without the burden of appealing to a wide readership,” the issue’s editor, Charles S. Johnson, promised minimal interference enabling contributors, including Zora Neale Hurston and Angelina Grimke, to broach controversial subjects that provided nuance in its representation of Black identity in the inter-war period. Brilliantly illustrated by Charles Cullen and Richard Bruce Nugent, the aesthetics similarly challenged negative stereotypes while interrogating complex themes of racial hybridity and multiple sexual orientations. In its time, the work was heralded as the “most acute analysis of the phenomenon of racial prejudice that has been written in English” and an “integral component of Harlem Renaissance cultural production.” (source: Park, Robert E. American Journal of Sociology 33, no. 6 (1928): 988–95. http://www.jstor.org/stable/2765991.) 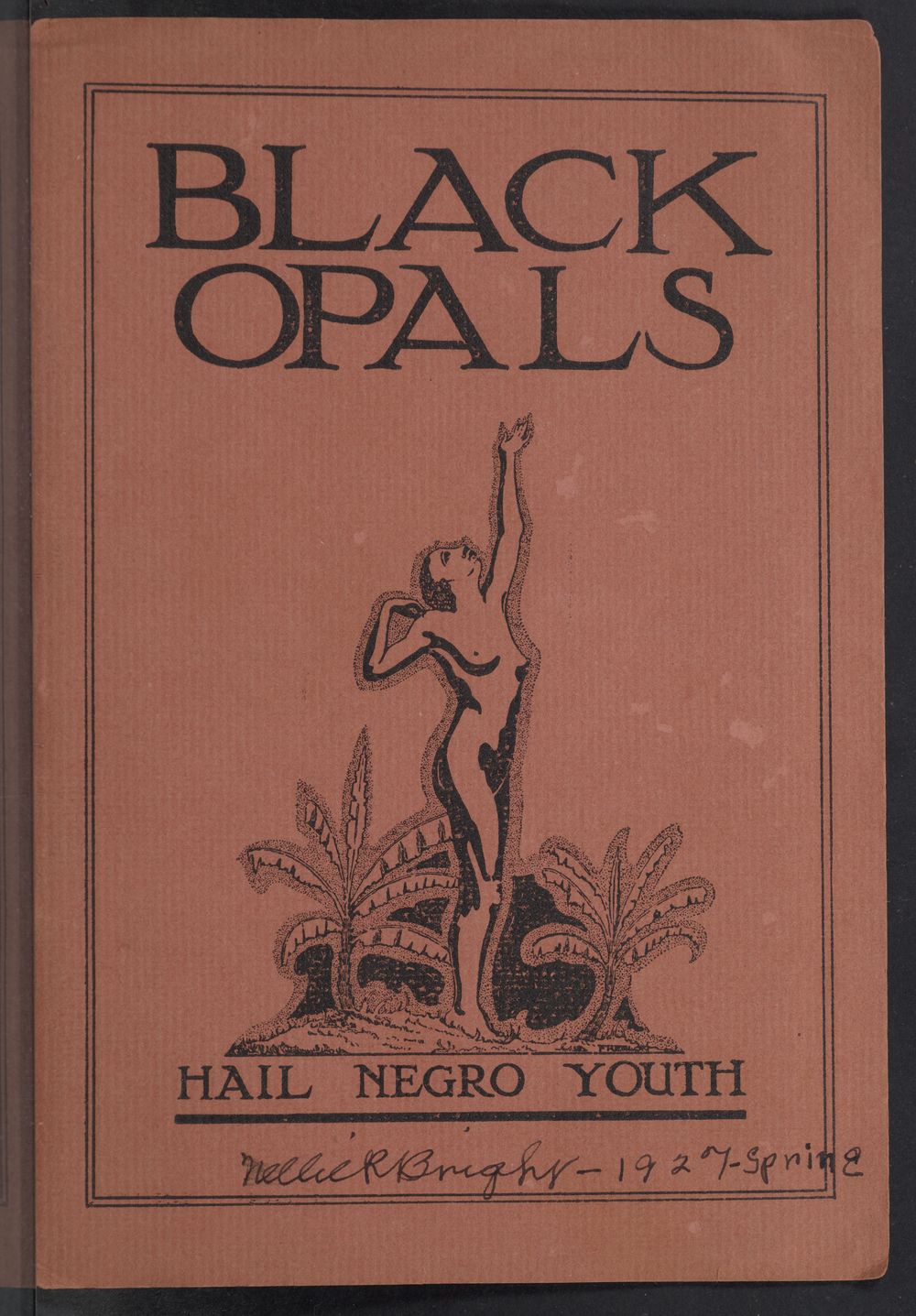 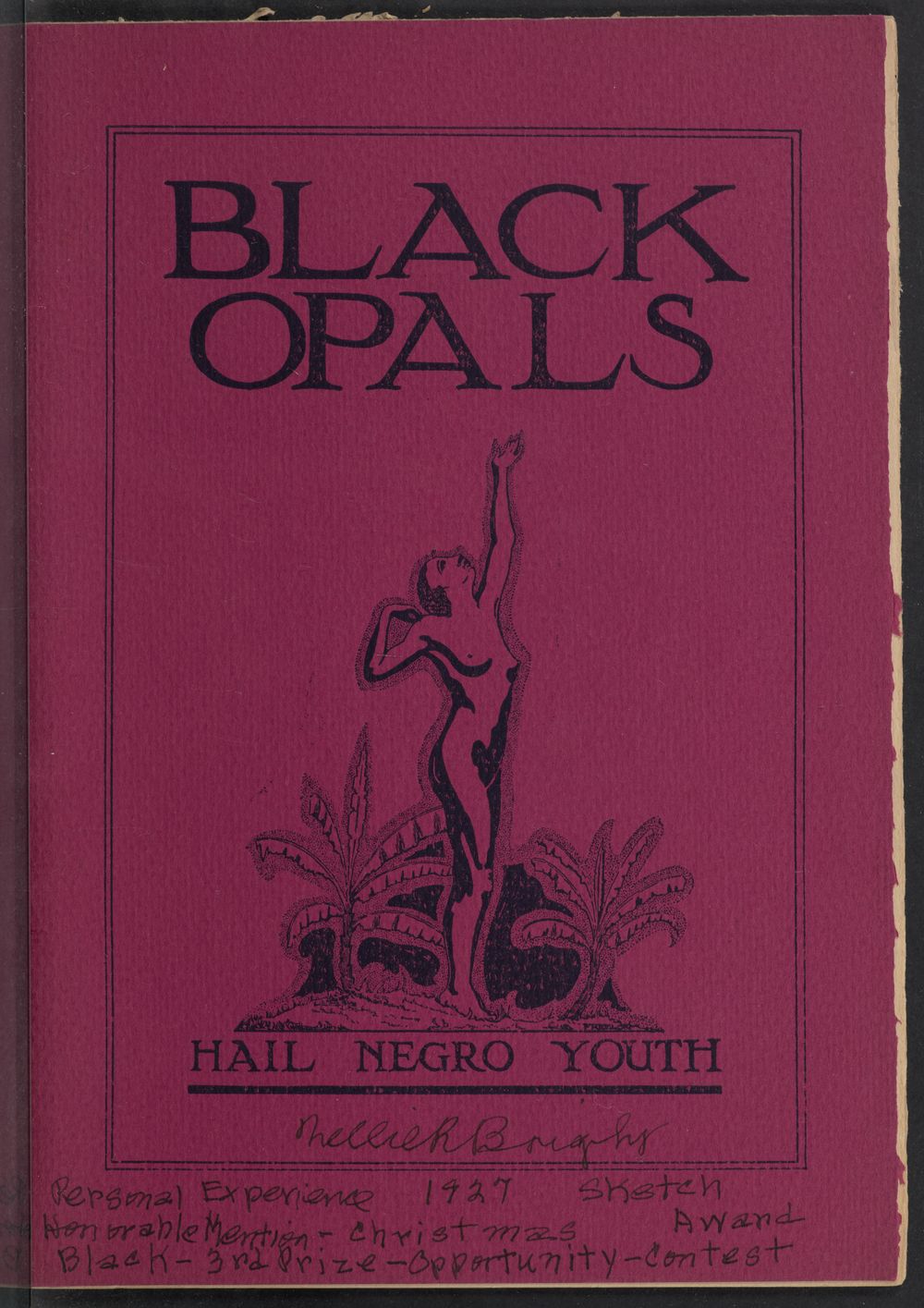 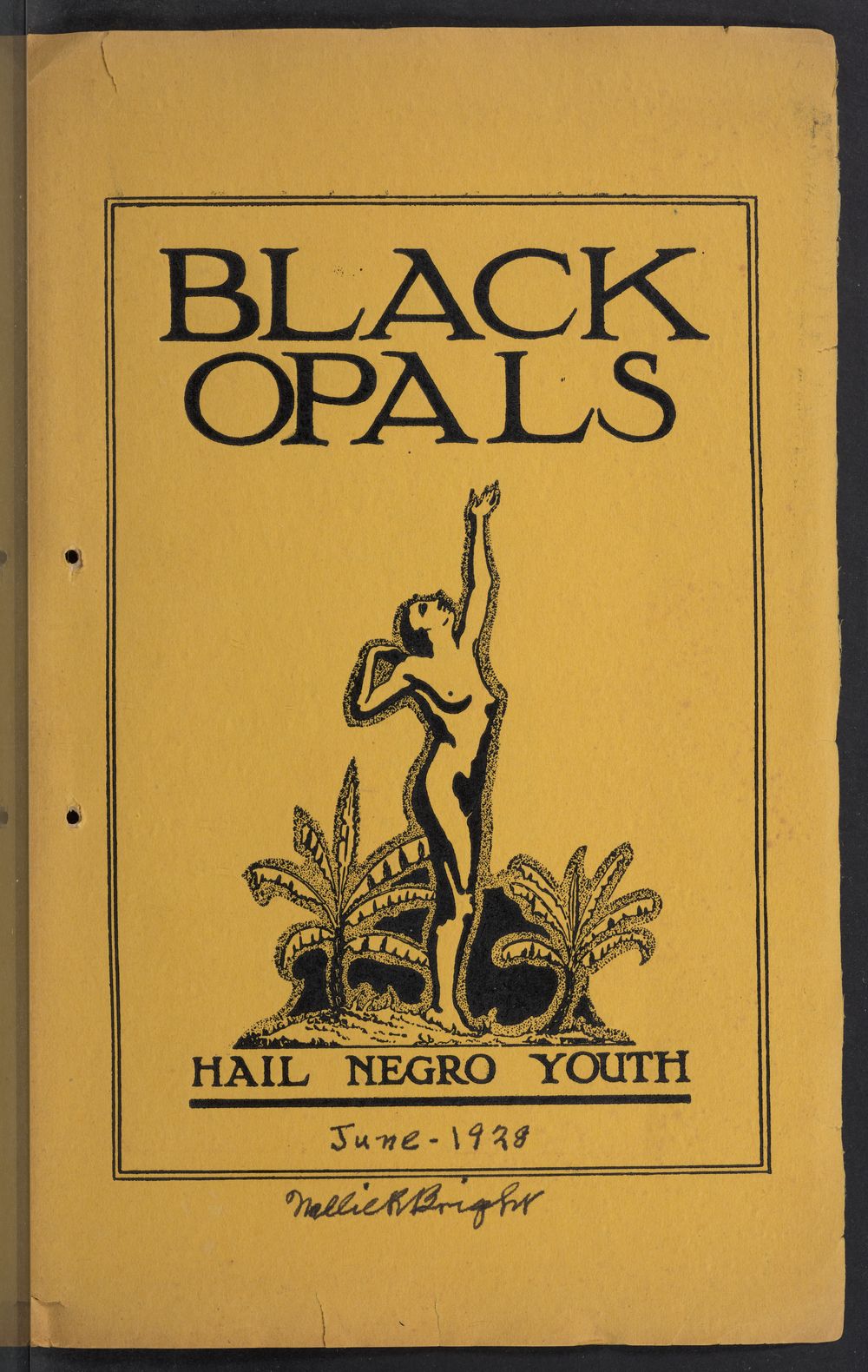 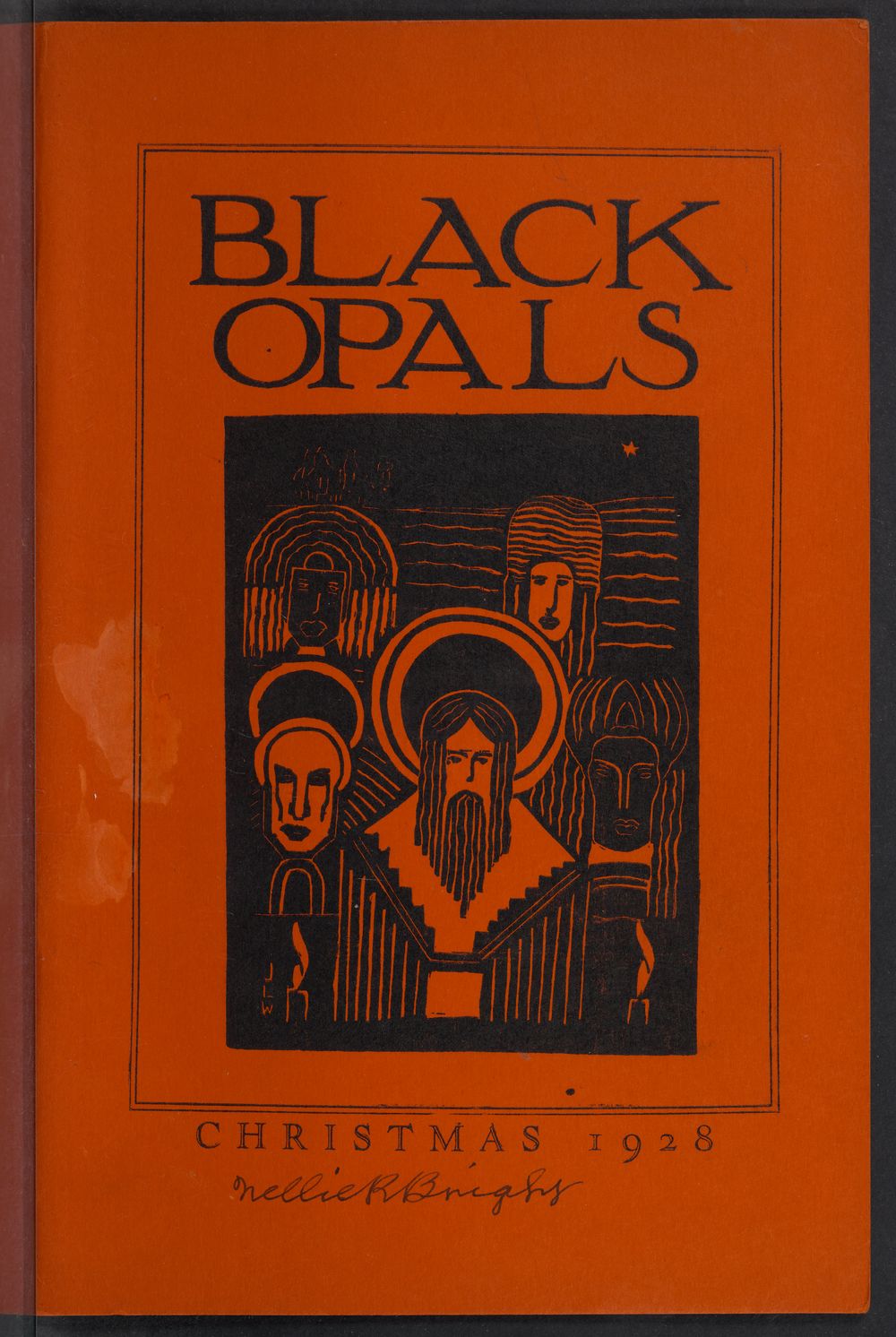 Co-founded by Philadelphia-based activist and authors Arthur Huff Fauset and Nellie Rathbone Bright, Black Opals ran between the spring of 1927 and July 1928. Lasting only four volumes of less than twenty pages each, art direction was overseen by Allan Randall Freelon, and contributions were supplied by luminaries including Jessie Redmon Fauset, Langston Hughes, and Mae Cowdery. Beyond the impressive quality of the individual works, the journal itself illustrates the impact of the Harlem Renaissance far beyond the reaches of the five boroughs, in particular, the connection between the Philadelphia Black literary scene and that of New York. The Princeton copies were owned by Bright herself, featuring marginalia throughout.