Please note that some of the materials featured on this site may include images, themes or words that include harmful, offensive, distressing, or inappropriate images or language. Please see the Library's Statement on Harmful Content for more information on the decision to hold these items.

The Cubical City by Janet Flanner

Her future had no more shape than her breath. She would continue moving and breathing but uselessly and without design 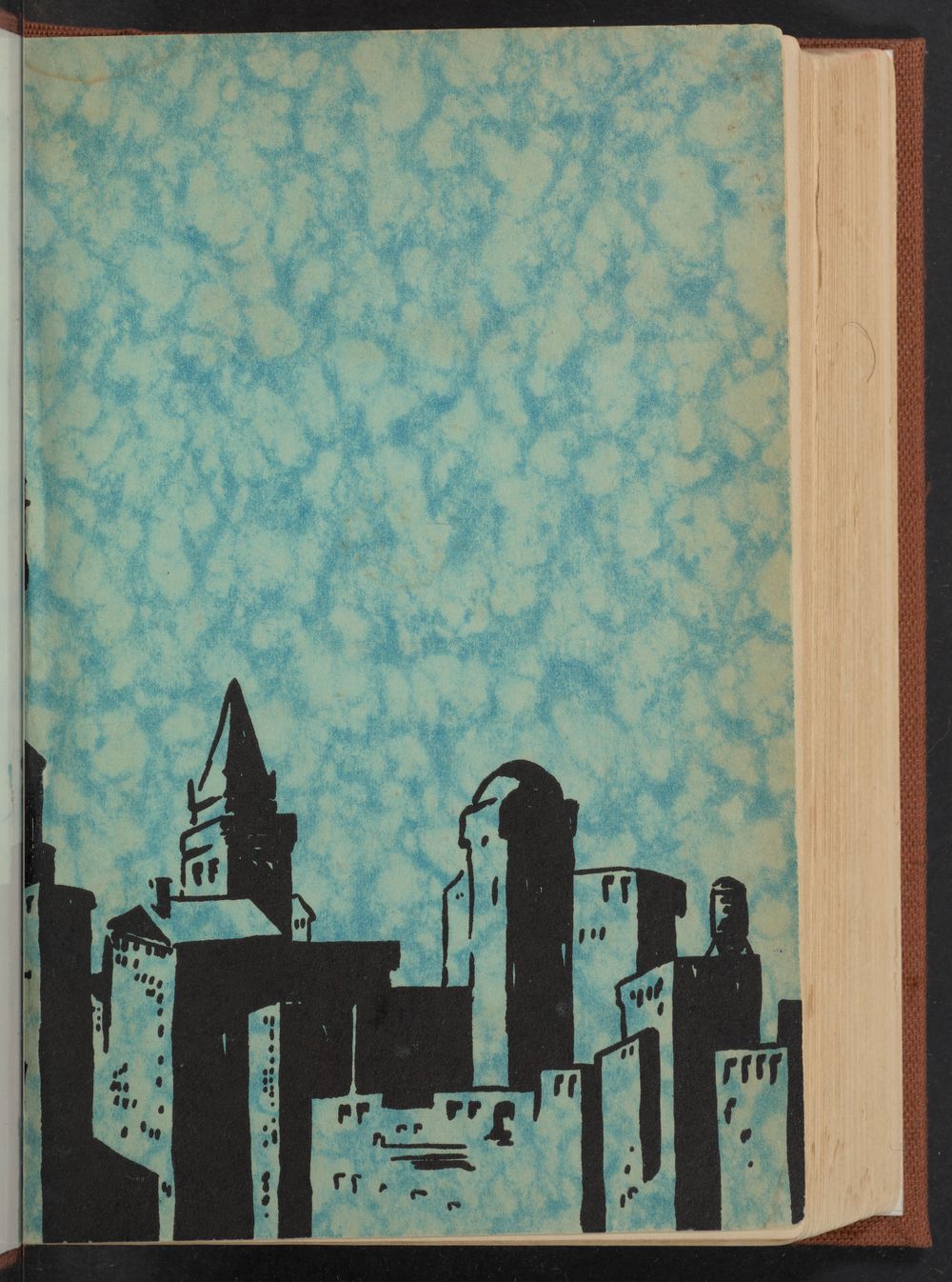 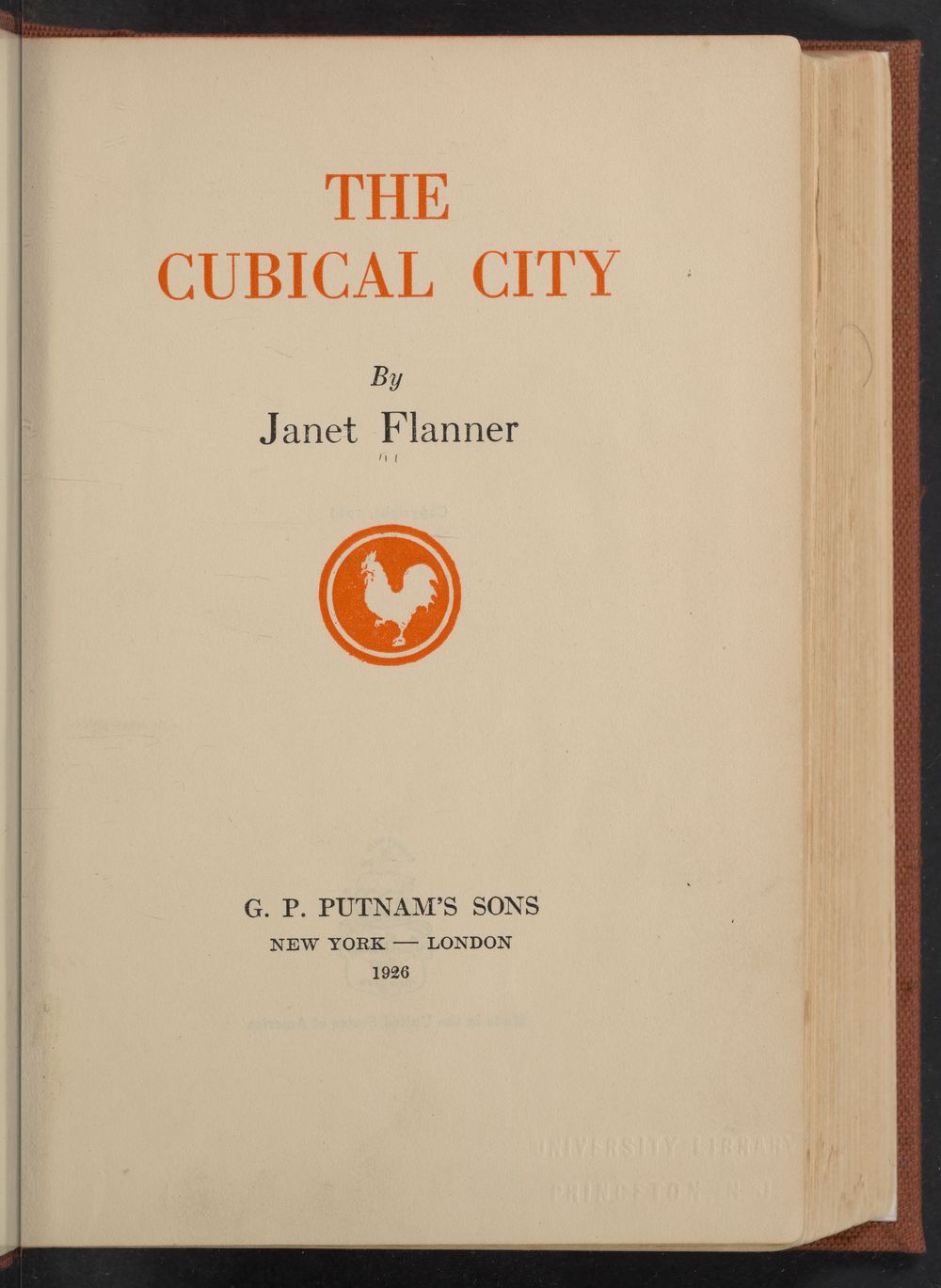 The Cubical City is the only novel written by queer journalist Janet Flanner (March 13, 1892 – November 7, 1978), who was best known for her work as the Parisian correspondent for The New Yorker and her column, "Letters from Paris." The Cubical City was released to little fanfare in its time, lost among more lauded modernist lesbian roman à clef (a “novel with a key” or a true-to-life story masked as fiction) releases such as Djuna Barnes’ Ladies Almanack and Radclyffe Hall’s The Well of Loneliness. Flanner’s coming-of-age story, however, sets itself apart through its cutting portrayal of female sexual appetite, gender fluidity, sexual fluidity, and the psychological turmoil of being queer in an unaccepting world.

Winnie-the-Pooh by A.A. Milne, with decorations by Ernest H. Shepard 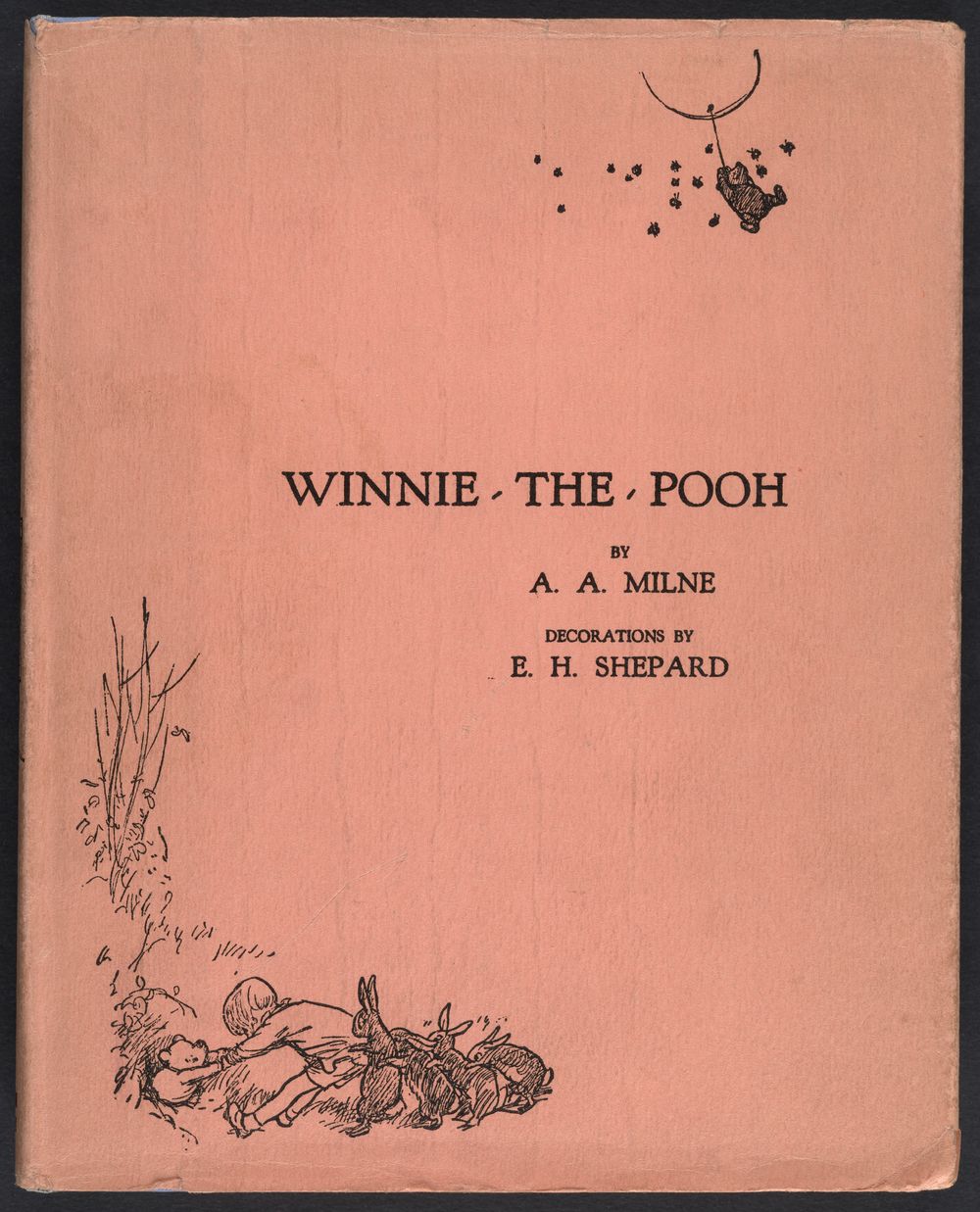 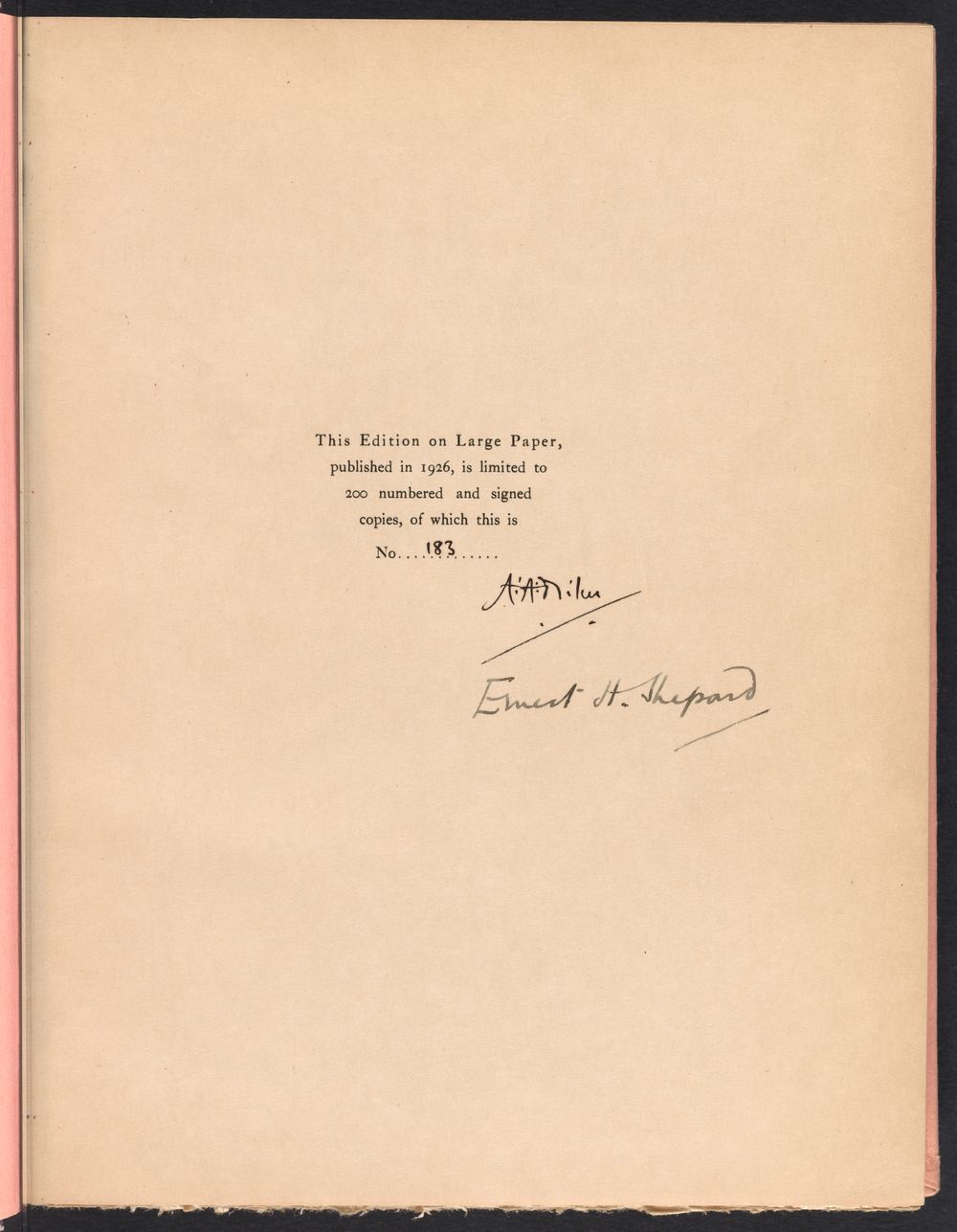 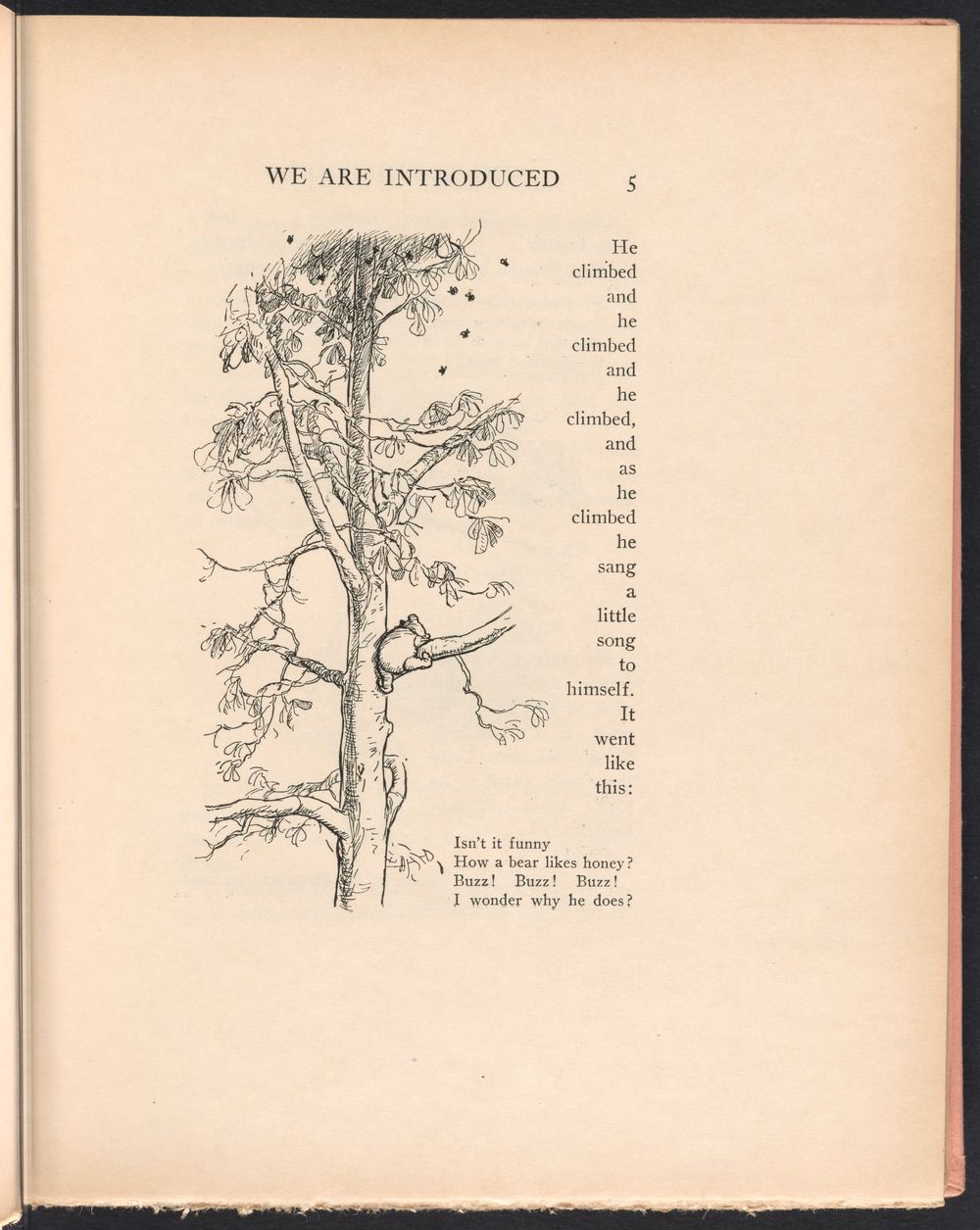 Almost immediately upon publication, A.A. Milne’s (18 January 1882 – 31 January 1956) Winne-the-Pooh was a commercial and critical success. Eventually translated into 72 languages, spawning multiple sequels and adaptations, critics praised the book’s “delightful prose” and “dialectical verse”. Princeton’s copy is number 183 out of 200 --- part of a limited print run -- and signed by both author and illustrator, Ernest H. Shepard.

"The road to hell is paved with unbought stuffed animals" 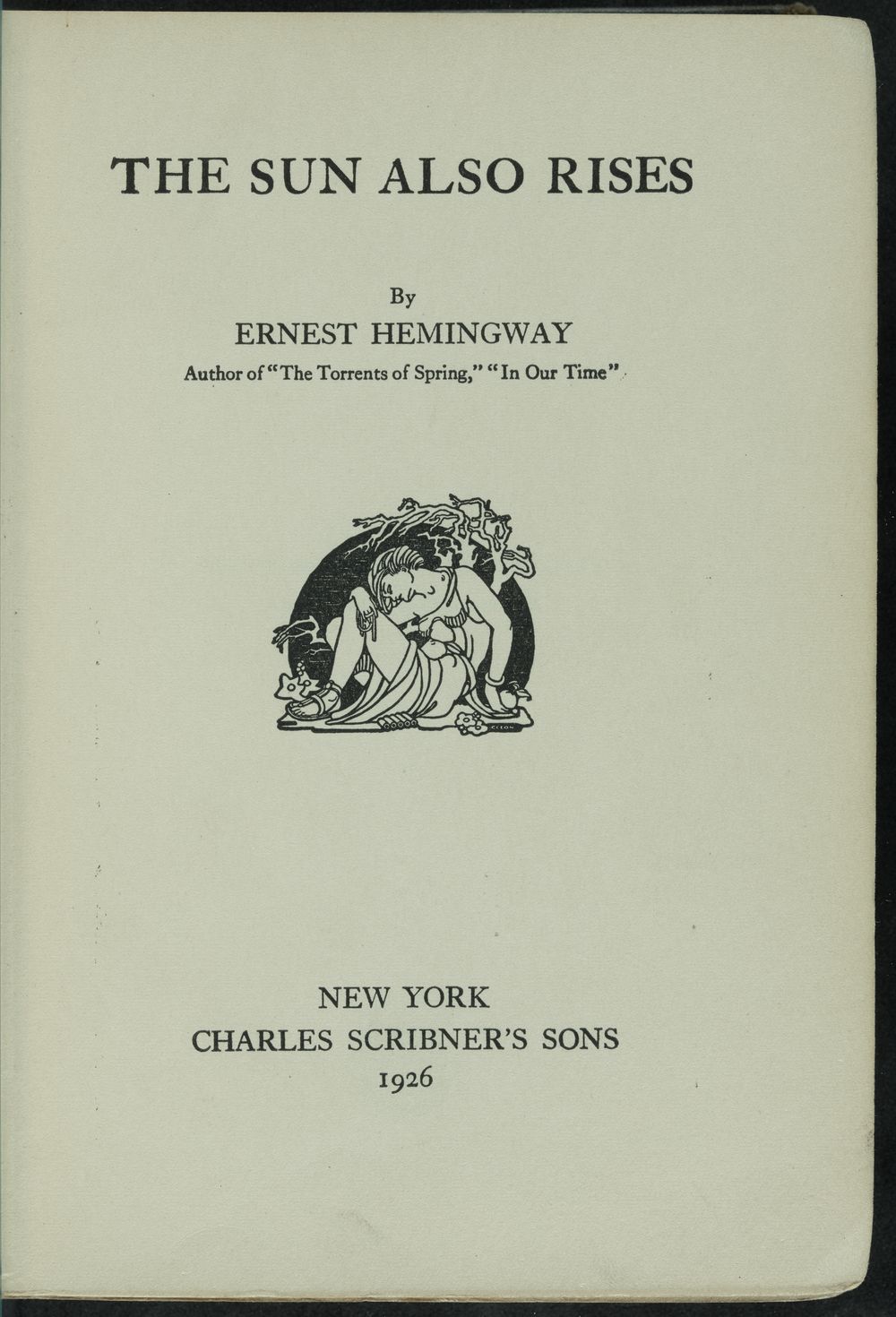 Between the bullfights, the impotent war hero, and the dismal damsel, Hemingway’s (July 21, 1899 – July 2, 1961)The Sun Also Rises is his most iconic work as well as his most highly regarded, serving as a staple on syllabi across High School and University English curriculum. The significance of this copy is less the content itself, but instead, its back story. Given to Sylvia Beach – publisher and owner of the iconic Parisian bookstore Shakespeare and Co.-- by Hemingway himself, Beach would go on to not only read the book but make small marks and notes throughout. Beach’s relationship with the literary is often discussed and known through the lens of her bookstore (some of which can be delved into via the Sylvia Beach Papers at Princeton), but here is an example of a more intimate engagement. Not only is this a record of reading, but the reading of a work by a personal friend.

Lolly Willows, or The Loving Hunstman by Sylvia Townsend Warner 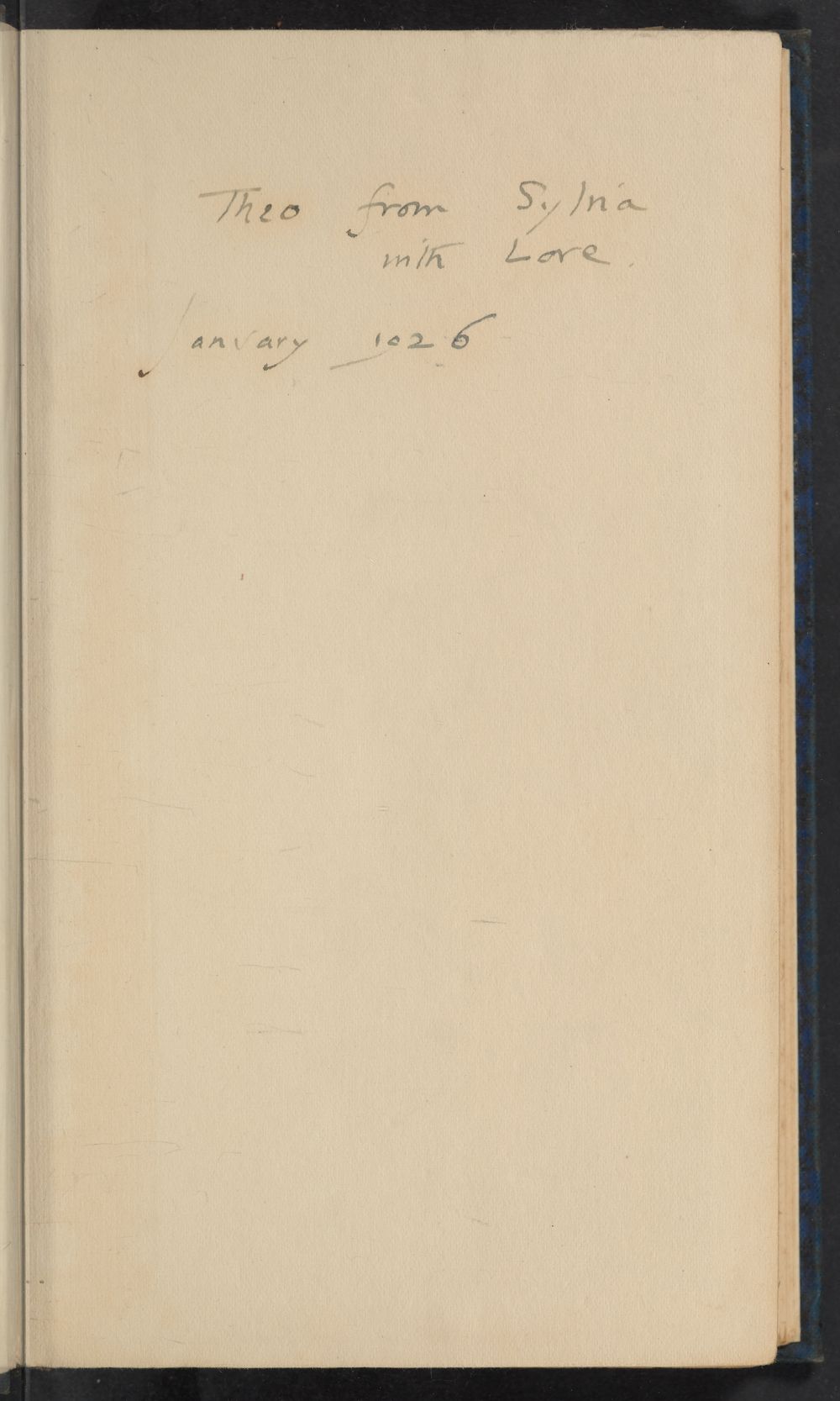 The tale of an upper-class woman turned witch, Lolly Willows, or The Loving Huntsman was the inaugural pick for the Book-of-the-Month-Club program and is regarded as an early feminist classic because of its main character’s rejection of societal expectations. After she makes a pact with Satan, Lolly’s overly dependent nephew is plagued by misfortune, causing him to abandon his plans for pastoral bliss and return to London, leaving Lolly to her own devices and granting her the freedom from the obligation that she so intensely desires. Warner (6 December 1893 – 1 May 1978) herself was an out lesbian, living her life with partner and poet Valentine Ackland, both of whom were involved with the British communist party. Warner’s work saw new attention during the second-wave Feminist movement of the 1970s but has since faded into the background once again. The Princeton copy is signed “To Theo from Sylvia with Love, January 1926,” indicating that it may be given from the author to fellow author and friend T.F (Theo Francis) Powys.

Streets in the Moon by Archibald MacLeish

Nor now the long light on the sea:
And here face downward in the sun
To feel how swift how secretly
The shadow of the night comes on ... 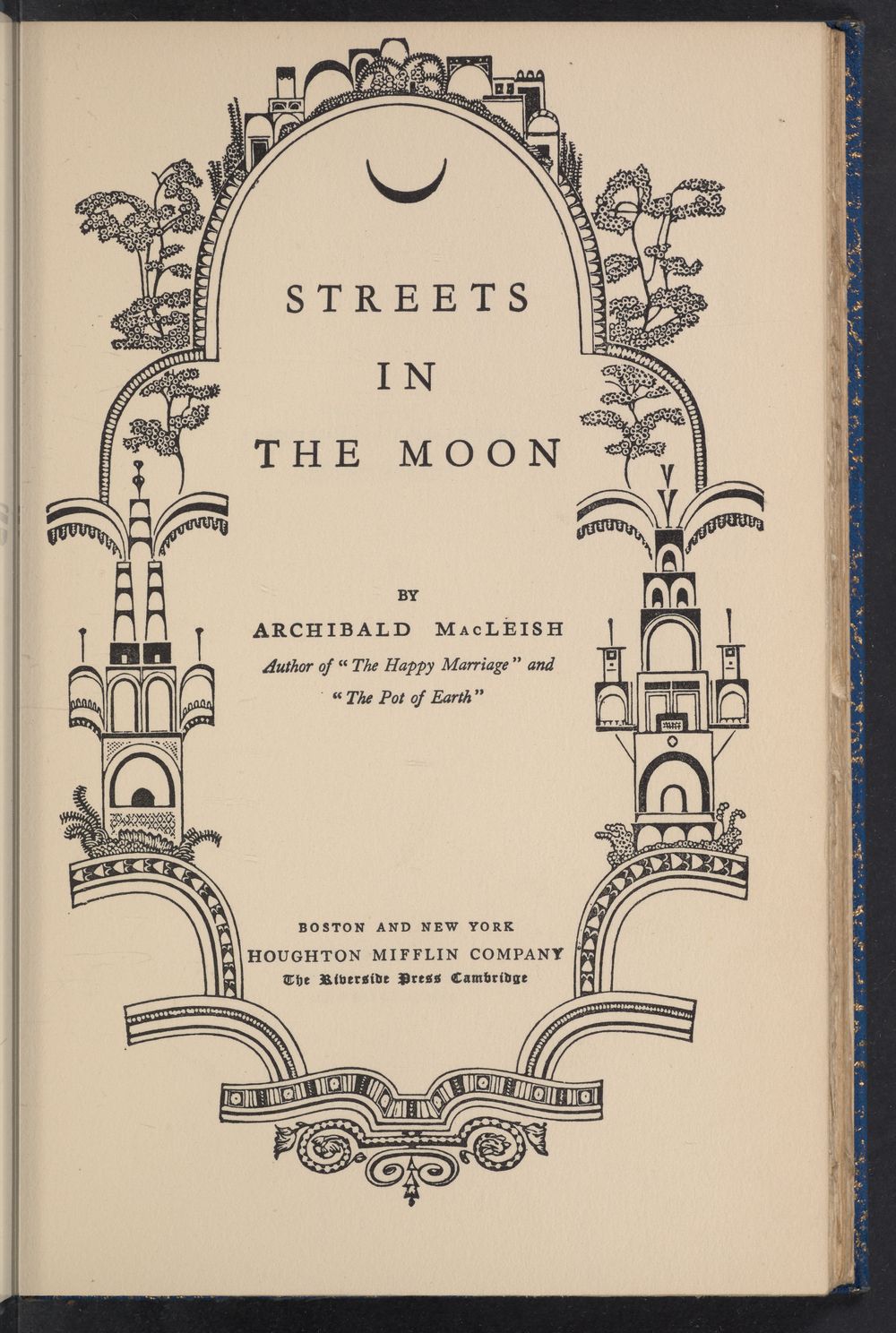 American poet and dramatist Archibald MacLeish (May 7, 1892 – April 20, 1982) was a two-time Pulitzer Prize winner, the 9th Librarian of Congress, and one of Ernest Hemingway’s longest-serving friends. Streets in the Moon is his eighth collection of poetry, best known for the two pieces “You, Andrew Marvell” and “Einstein.” This copy was printed as part of a small but special print run of sixty special editions printed by Riverside press in Cambridge on paper made by William Morris’s Kelmscott Press. Princeton also holds a copy that was presented to Adrienne Monnier and Sylvia Beach with an inscription by the author. MacLeish and his wife Ada were part of the troupe in and out of the Shakespeare and Co. bookstore, rubbing elbows with the Fitzgeralds and Dos Passos. MacLeish is often most remembered for his famous friends, but Streets in the Moon skillfully expresses the weight of struggle in a post-war world.

The western sky of Barbadoes was ablaze. A mixture of fire and gold, it burned, and burned — into one vast sulphurous mass. It burned the houses, the trees, the windowpanes. The burnt glass did amazing color somersaults — turned brown and gold and lavender and red. It poured a burning liquid over the gap. It colored the water in the ponds a fierce dull yellowish gold. 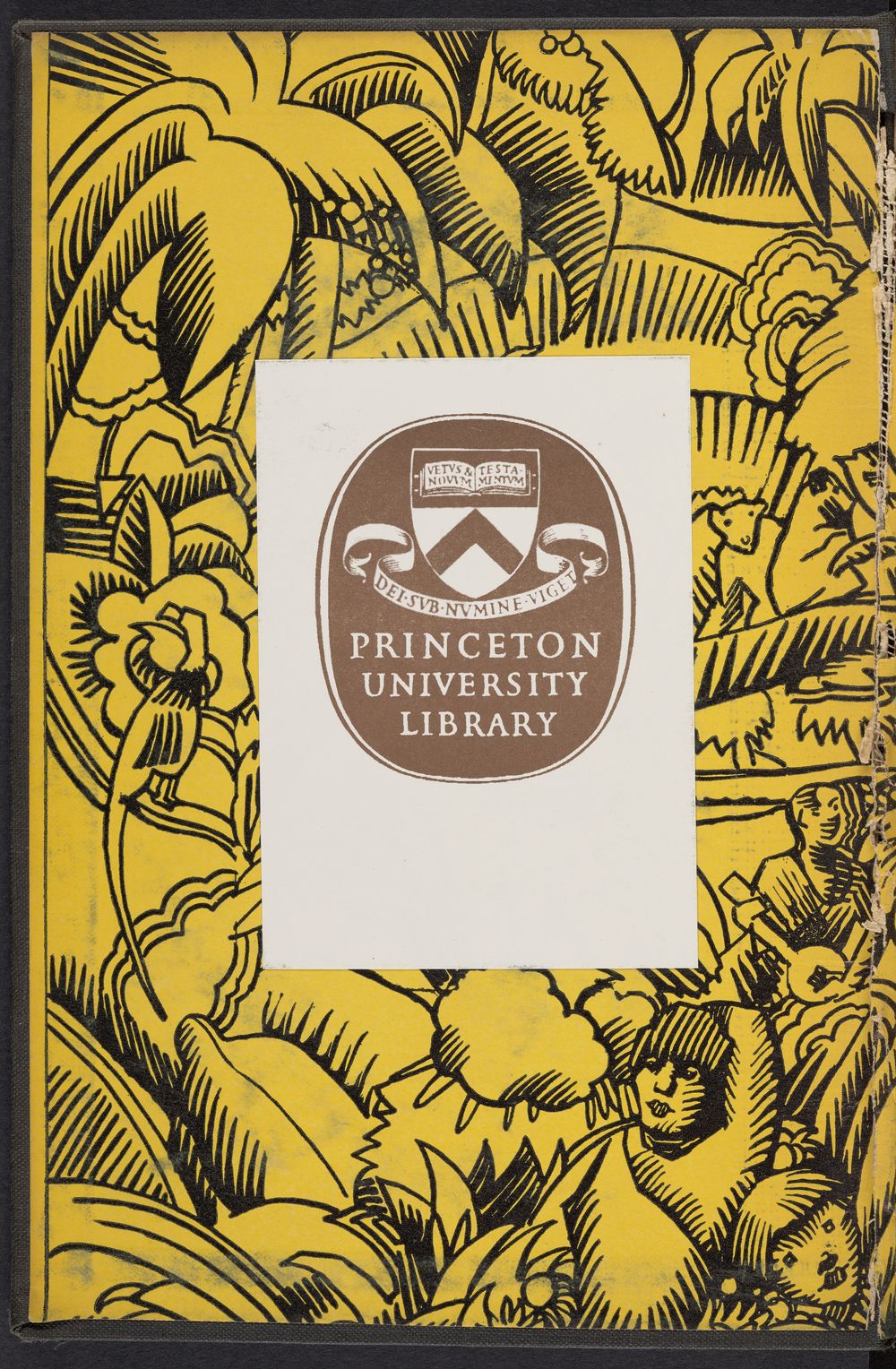 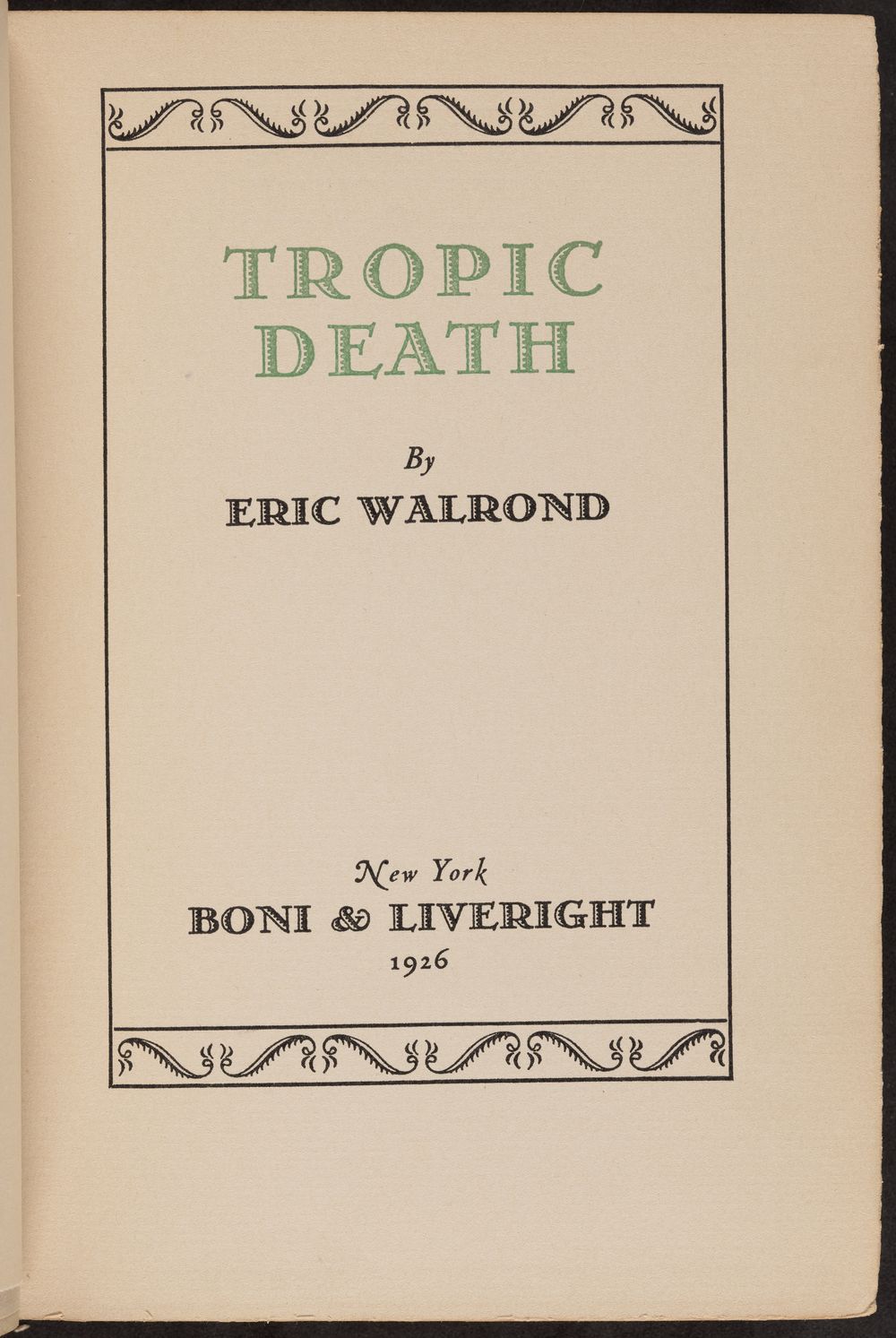 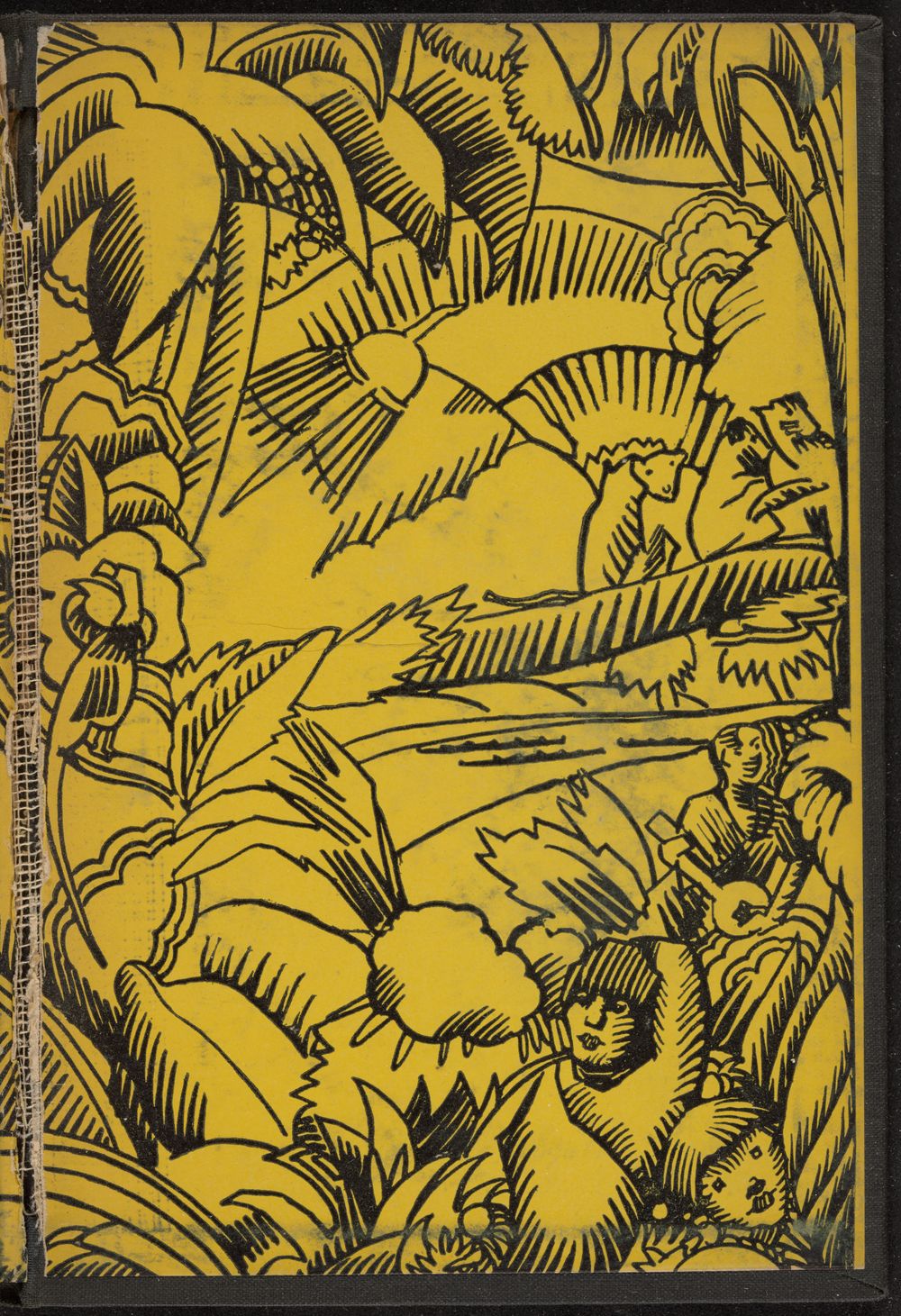 Set in the Caribbean and Central America, Tropic Death documents the experience of black laborers during the United States' construction of the Panama Canal. In this, his only published work, Eric Walrond (18 December 1898 – 8 August 1966), introduces a Caribbean sensibility into the Black literary scene focused predominately on distinctly North American experience. In a critical intervention, Walrond offers a transnational and Pan-American lens, elevating issues of language, empire, migration, and diaspora. Across several short stories, Tropic Death offers a linguistical innovation. Walrond integrates the use of dialect with the purpose of capturing not only Caribbean speech patterns and intonation but also culture. The specter of U.S. imperial and neo-colonial ambitions looms large in this work, as Walrond documents the contemporaneous transnational migration of Black laborers and the shifting experience of their lived experience in diaspora. W.E.B Dubois celebrated this groundbreaking work, not only calling it a “distinct contribution to Negro American literature” but also “a human document of deep significance and great promise.” (Dubois, “Five Books” Crisis Jan 1927, 152.)

And she had lost or forfeighted her birthright, this primative birthright which was so valuable and important an asset, a birthright that all the civilized races were struggling to get back -- this fact explained the art of a Picassco or a Stravinsky. To be sure, she too, felt this African beat -- it completely aroused her emotionally -- but she was conscious of feeling it. 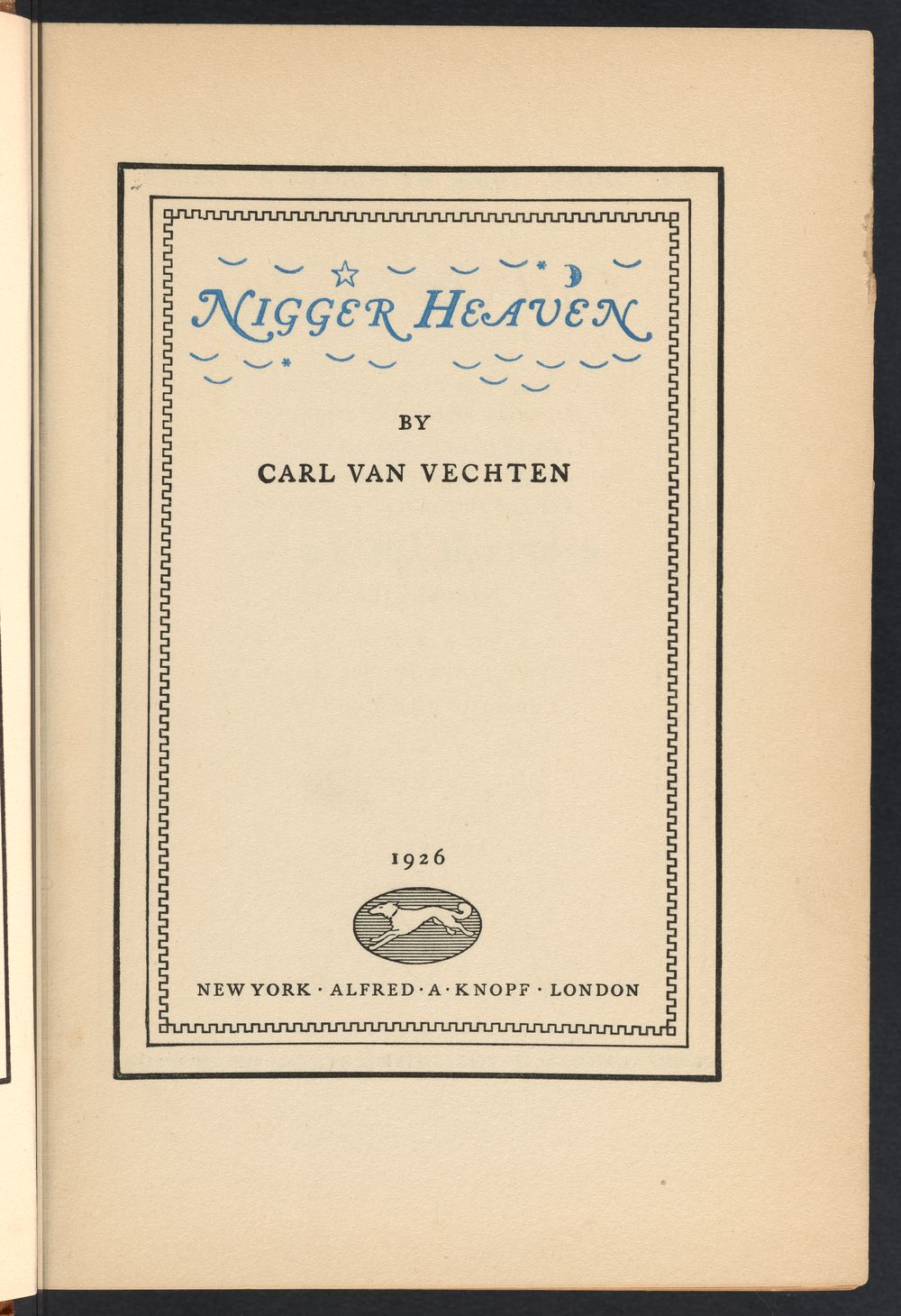 During the 1920s, Harlem was an enormously stimulating milieu for African American intellectuals, whose distinct cultural productions drew the attention of white spectators. Carl Van Vechten (June 17, 1880 – December 21, 1964), a white writer, befriended many of the central figures of the Harlem Renaissance, giving him privileged access. The provocative and incendiary title made reference to the segregated balcony seating of theatres. The title openly courted controversy even prior to its release, prompting calls for Van Vechten to change it, which he refused. Upon its publication, Nigger Heaven was instantly a best seller amongst white audiences eager to get a behind-the-curtain look at the famed Harlem experience. The black community, including some of its most celebrated authors and poets, was more split in their opinion, launching months-long protests. Those invested in the cause of racial uplift, including W.E.B. Dubois, were dismissive of the novel as “cheap melodrama” while younger writers, Claude McKay among them, seized on the novel’s incendiary impact and began releasing work that sought to distinguish itself from the thematic bounds previously laid out. Among the novel's defenders was Langston Hughes, who released a public statement in support of Van Vechten. Despite Hughes' appeal, the controversy did irreparable damage to Van Vechten’s reputation, who had been a recognized cultural conduit prior to the publication. Arguably, however, the novel’s release did more to garner national and international awareness of the Harlem Renaissance and helped encourage more experimental and controversial topics.

Princeton also holds a collection of Carl Van Vechten Photographs, 1923-1942 (Call Number C0877), available to view in the reading room. These photographs will be under copyright until 70 years after Vechten’s death (2034)

The long train rumbled and swayed, whistle blowing intermittently, screeching discordantly, past smoky factory and office buildings, through rows of one-storied, two-, or three-room cottages, outside which on hard packed clay earth played here toe-headed white children or there black or brown or yellow ones. It plunged suddenly into cavernous darkness under a bridge, thick acrid smoke pouring into the open windows of the wooden coaches. 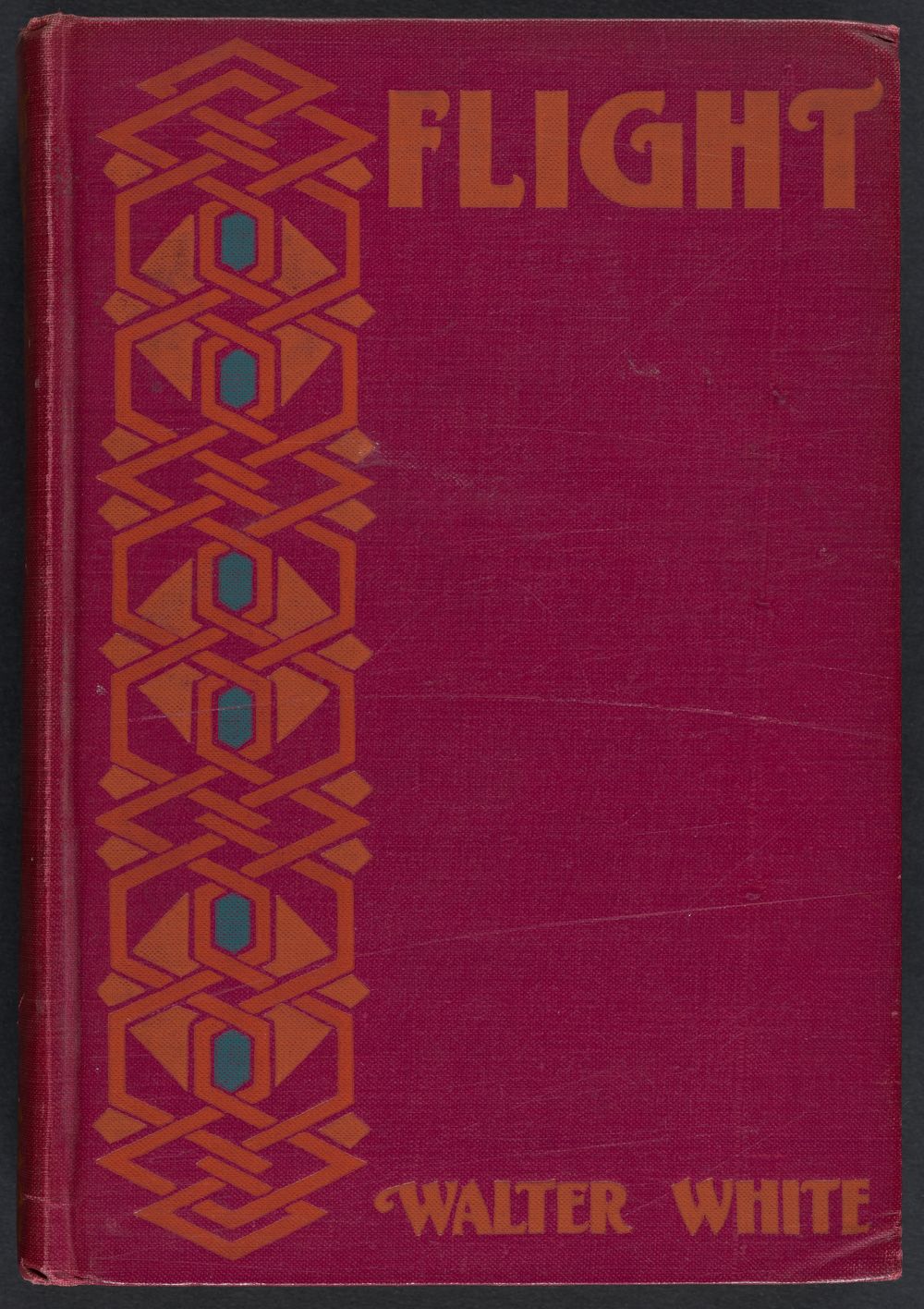 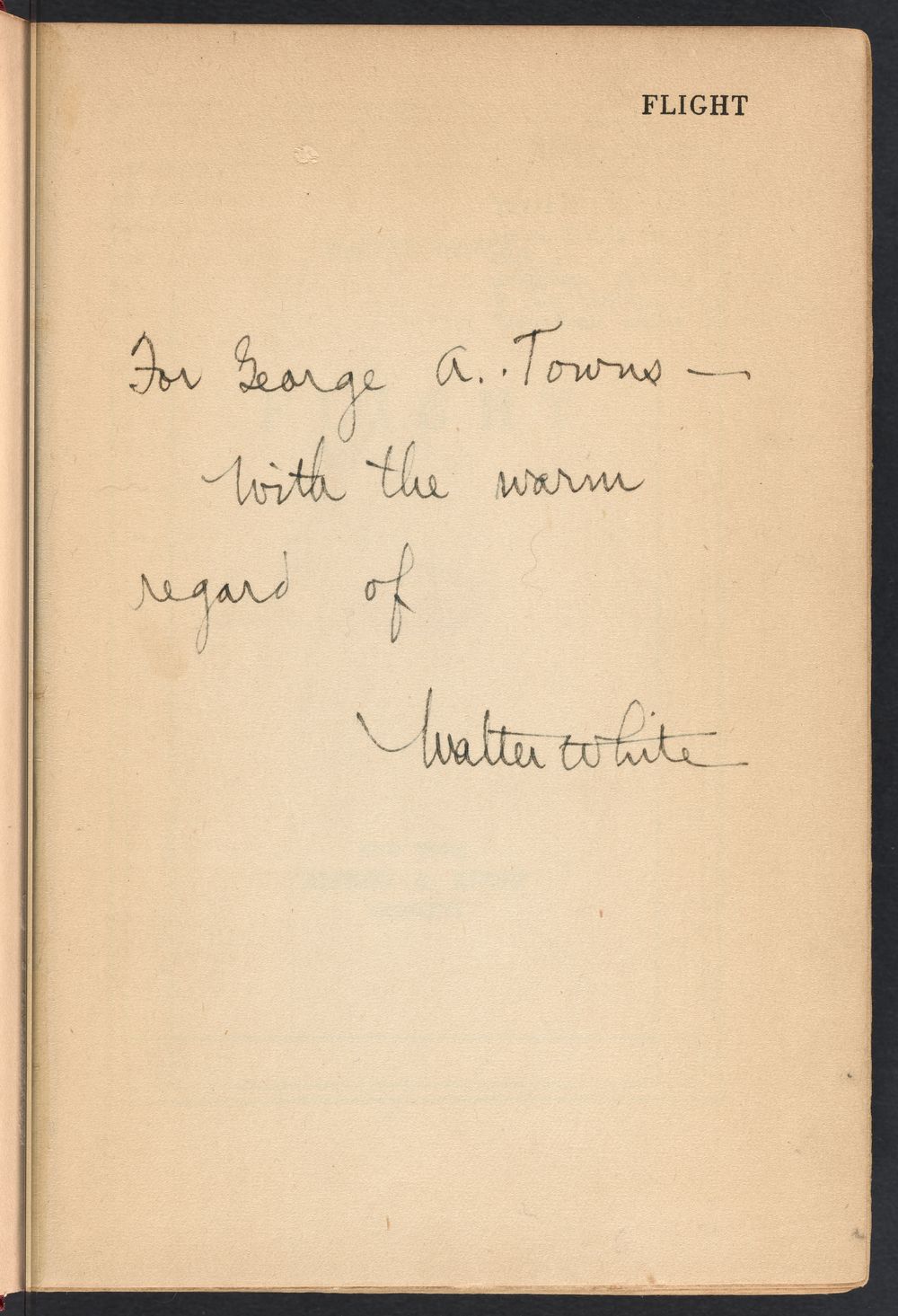 In Flight, Walter F. White (July 1, 1893 – March 21, 1955), an investigative journalist, activist, and writer presents innovations on the discourse of race, media, and passing. The novel engages a number of complex themes, critiquing racism, colorism, religious prejudice, patriarchy, and capitalism. In Flight, White takes aim not only at any facile understanding of the black-white racial binary but also at the prejudice of colorism and classism within Black society. Drawing comparisons to Nella Larsen’s Passing, the experience of Flight’s central protagonist, Mimi, highlights the permeability of the color line. White, himself a white-passing Black man, exploits this permeability as an investigative journalist, passing as white while investigating lynching in the Southern US. His experience serves as inspiration for the 1924’s The Fire in Flint.

Life my child, is not easy for women, and we must fight with all the power of the artifices that heaven has given us, to maintain our superiority, and we need all the tranquility of the brain and the heart to triumph pettiness and ambushes that we try by all means to spread under our feet 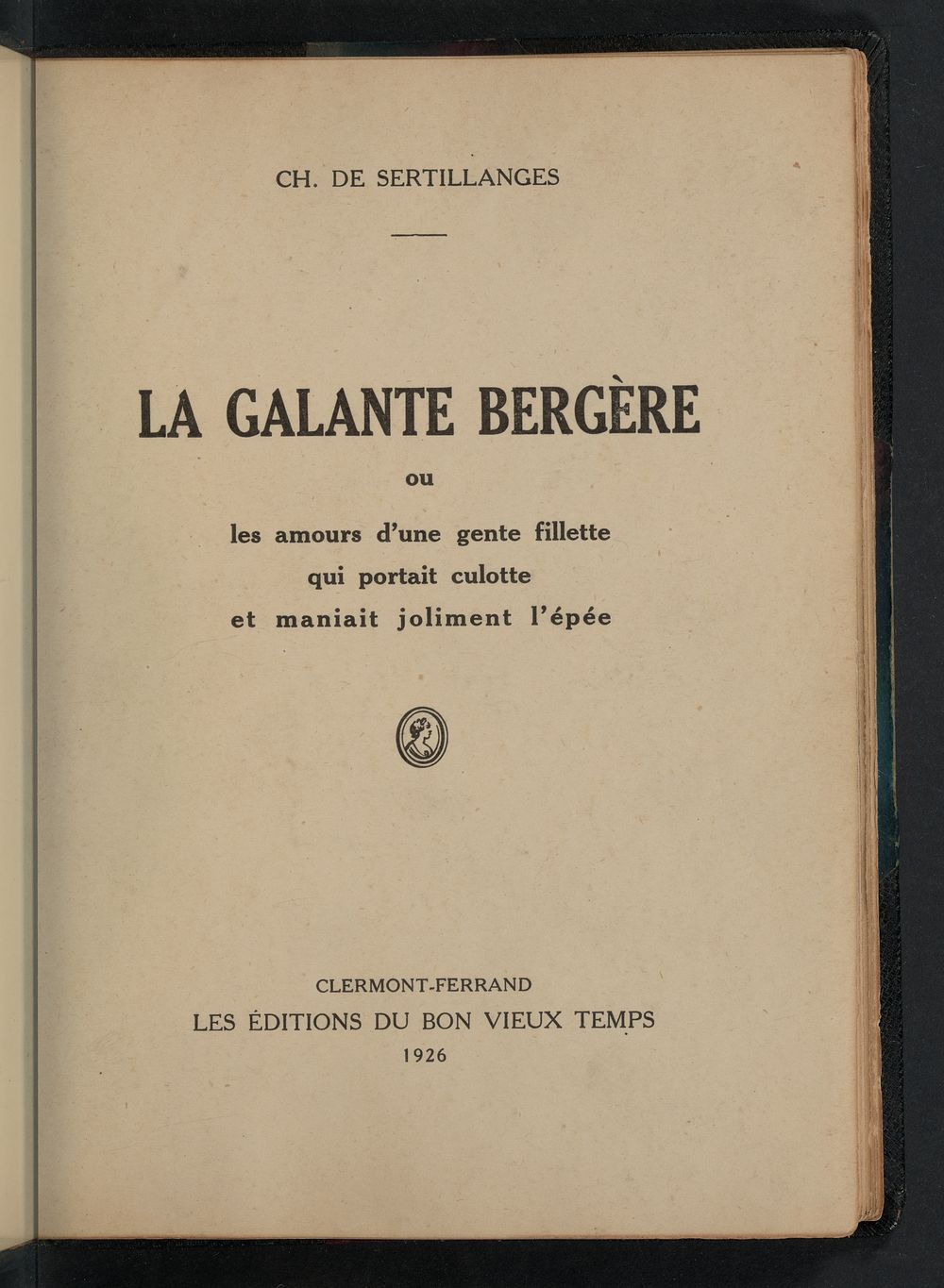 Published by one of the most important erotica publishers of the interwar period, Maurice Duflou, La Galante is a rare erotic text from the early 20th century. Translating to “The Galante Shepherdess, or, The Loves of a Gentle Girl who Portrait Panties and Nicely Handled the Sword” the book features six explicit illustrations, depicting acts between various combinations of genders. Only 150 copies of the text were printed in its time and even fewer of this original survive today. In the 1930s the book was reissued under the pseudonym Charles de Sertillages, however without the illustrations. Most collections hold the un-illustrated edition, making Princeton’s particularly rare.

Please note: this item includes images that are explicit (in that they contain nudity and graphic content).

Inside the thick walls, with opened boxes of cartridges on a corn-husk mattress in the middle of the floor, Warrior kept a cat-like vigil, darting from window to door, thrusting his rifle, like the darting tongue of a snake, through the openings in order to drive overbold attackers back to the cover of the trees 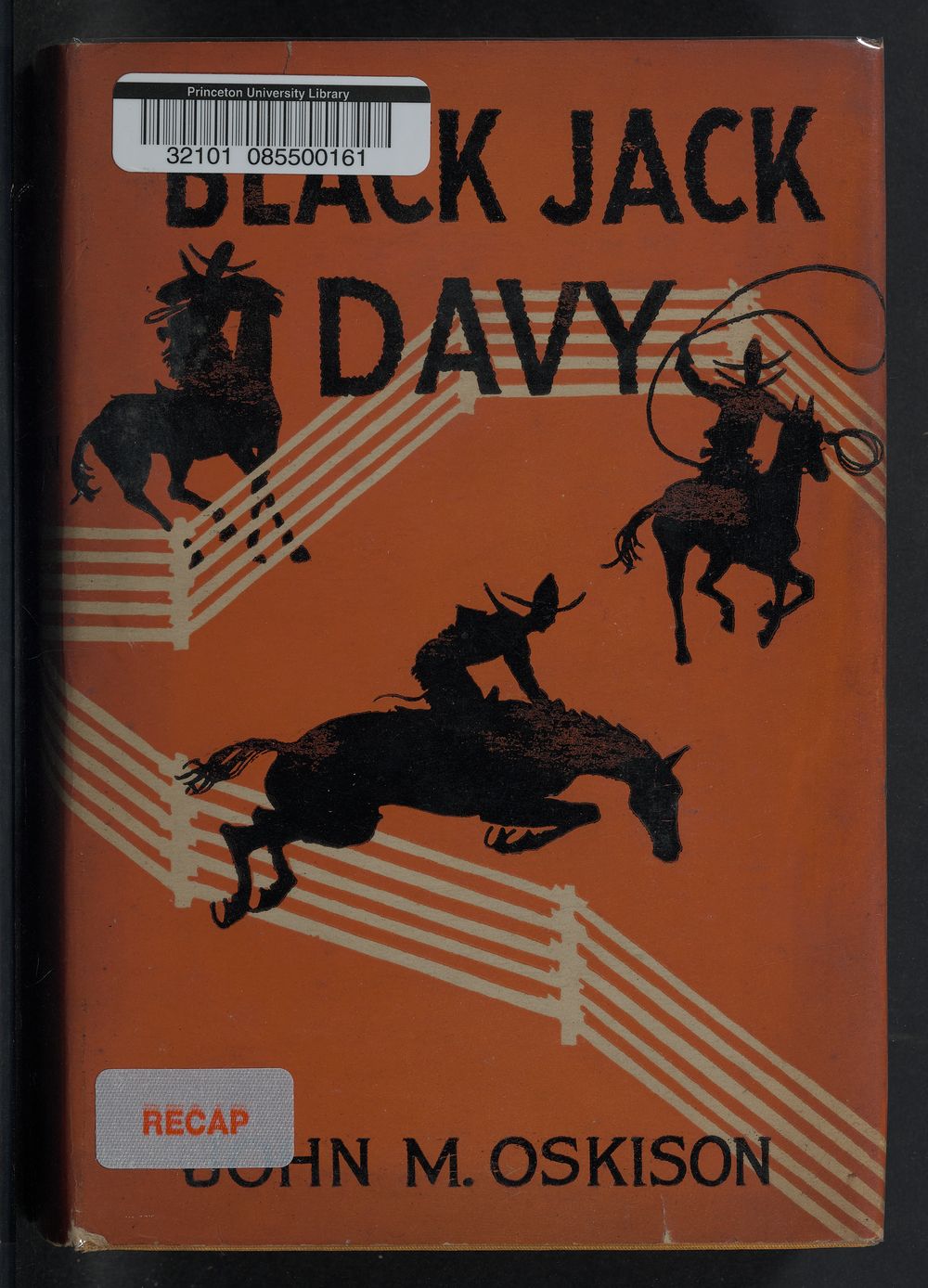 Born in the Cherokee Nation, John M. Oskison (1874–1947) was Stanford University’s first known Native American graduate, completing his degree in 1898. After a short stint at Harvard for graduate school, Oskison became a prolific editor, journalist, and creative writer. Black Jack Davy is his second novel, a western set in “Indian Territory” and centering on white protagonist, Davy Dawes. Because his early books feature few explicitly Indigenous characters and little representation of traditional Indigenous culture, some scholars have argued that Oskison’s work falls into the trap of assimilationism. Others contend that this is instead a superficial reading of Oskinson that ignores the complexity of early 20th-century Indigenous (and particularly Cherokee) points of view.